Hey guys i was wondering if anyone could help me…

Tried to start up zombies and this message appeared

Anyone know what to do?

Hmm I would try clearing the cache, I really don’t know if it is possible on the Xnox One, but I imagine it is. If that doesn’t work try deleting the downloaded content and reinstall it.

Is there a way on ps4 to buy just the dlc so i dont have to buy the season pass?

Okay that makes it even easier, just go to the dashboard, go over to storage, and clear the cache. If it doesn’t work after doing so, you can also try deleting your profile and redownloading it.

Is there a way on ps4 to buy just the dlc so i dont have to buy the season pass?

Ok i deleted the cache and trying again, il download profile again if this doesnt work, il keep you updated

Ok i deleted the cache and trying again, il download profile again if this doesnt work, il keep you updated

Okay sounds great, this could be an easy fix or a complex fix, either way I am sure we will sort it out.

Nope it doesn’t work… This is pathetic now…

Nope it doesn’t work… This is pathetic now…

What do you expect it is a COD developer. Did you try uninstalling the content and reinstalling it?

I did that twice nick…

Okay, well you aren’t the only one having this problem. 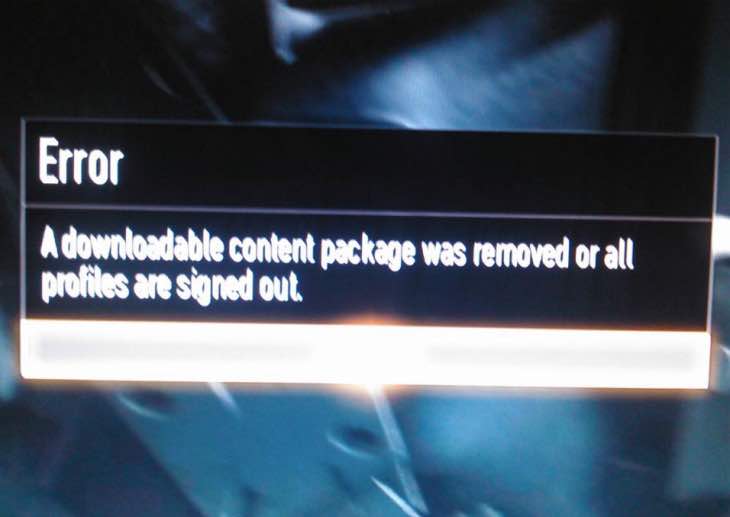 Given the anticipation for the very first zombies map for Advanced Warfare, we would have expected Sledgehammer to be able to launch the content without any problems. Unfortunately though, since installation we can see that there …

There is many players having this issue, all I could say is be patient until Sledgehammer Games updates you with information. Follow their Twitter if you have on they should put some updates out on the issue.

Well I mean I really don’t expect much from the COD developers anymore since all their games are is repetitive, copied games.

Receive error message " a downloadable content package was removed or all profiles are signed out" I am signed in and have downloaded the DLC? Anyone else got this?

Also here is another link you can read the replies above.

This same thing happened to me… Just go to the Dashboard go over to Active downloads, you will be downloading the content, wait for that to be downloaded… Try again.

you just enter in a non xboxlive profile then when your in exo zombies press home sign out then sign in on xbox live thats the only way to get around it so far i do it and u can join with other ppl and all it works!