The Assassin’s Creed Odyssey cheats have been updated!

Scrap that managed to get it working

I have a problem, in the update earlier you made (The one with 400 + XP) you don’t get skill points for leveling up and you’re missions increase in lvl. acording to you’re lvl… Any way to help would be nice

I noticed. The XP mod adjusts your overall XP; not level XP. That’s why you don’t get the ability point. Will add those separately in a bit

Just for your information: you’re supposed to add-up to the end of the level; then kill something to level-up. Report if it works, please. Oh… and it’s 500, not 400

Soo, i have to start over or continue??

anyway i can send you my save file? so you have a progressed save?

The save files are account-embedded. Won’t work. Start over for what purpose? As I said, you will get Ability Points editing separately, if you’re concerned about that part.

Can’t you make the xp like you did in Tom Clansy Ghost Recon Wildlands were you would get full xp ??

Not everyone wants to be max level.

Not what i ment, if you’ve used his other cheat you would know that it fills xp to the point were you need 1 xp to the next level.

is there possible to add xp multiplier?

It changes the OVERALL XP. That’s how this game works. Not all games are alike. Even if they’re from the same producer. Will check if I can do anything about it. In the meantime, please take care of Teleport to Waypoint, Free Cam and other options for me… till I honor your request. Mkay? I swear, you people are simply fixist (from “fixed point”).

I’ll look into that. I Remember having tried it in Origins. Thanks for the suggestion!

Apparently, when killing someone (and I hope the same function runs when you gain XP from something else), there’s an object called RewardExperiencePointsOutcomeData

The total you get as XP is the sum of two offsets within this structure:

This is then passed to adding the total to ProgressionPlayerData. And in my tested example, the sum was made up of 12 for the kill and 3 for stealth… I think? So 15 for killing this nigga: 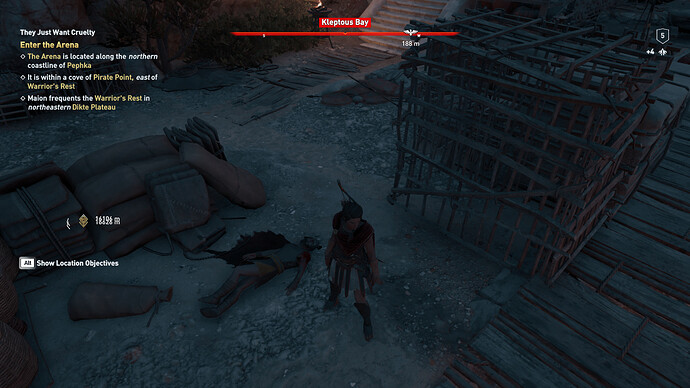 Then I had another test… set both offsets to 2000. And guess what, I leveled up

So what I think I’ll do is allow the user to set the multiplier. It will apply to both constraints, normal and bonus. Downside: you’ll have to kill something/someone to get that XP.

Or… wait… I’ll see if I can run the function that updates progression; maybe it does more than I initially thought of

L.E.#1: Yeah, didn’t work to manually call the update function with proper parameters. Same thing happens; you get level 5 in inventory, but level 4 on screen and no upgrade effect. I guess it’s bound to the content in the Reward object that’s processed further on (not at that location of mine). Regardless, I’ll use it for hijacking

Edit: Also I don’t mind having to kill something. I just like having a passive xp bonus