Battlefield 1 Cheats and Trainer for Origin

This is the official discussion topic of the Battlefield 1 Trainer and Cheats in the WeMod app. Please post any suggestions, bug reports, or praise that you may have for the cheats in here! 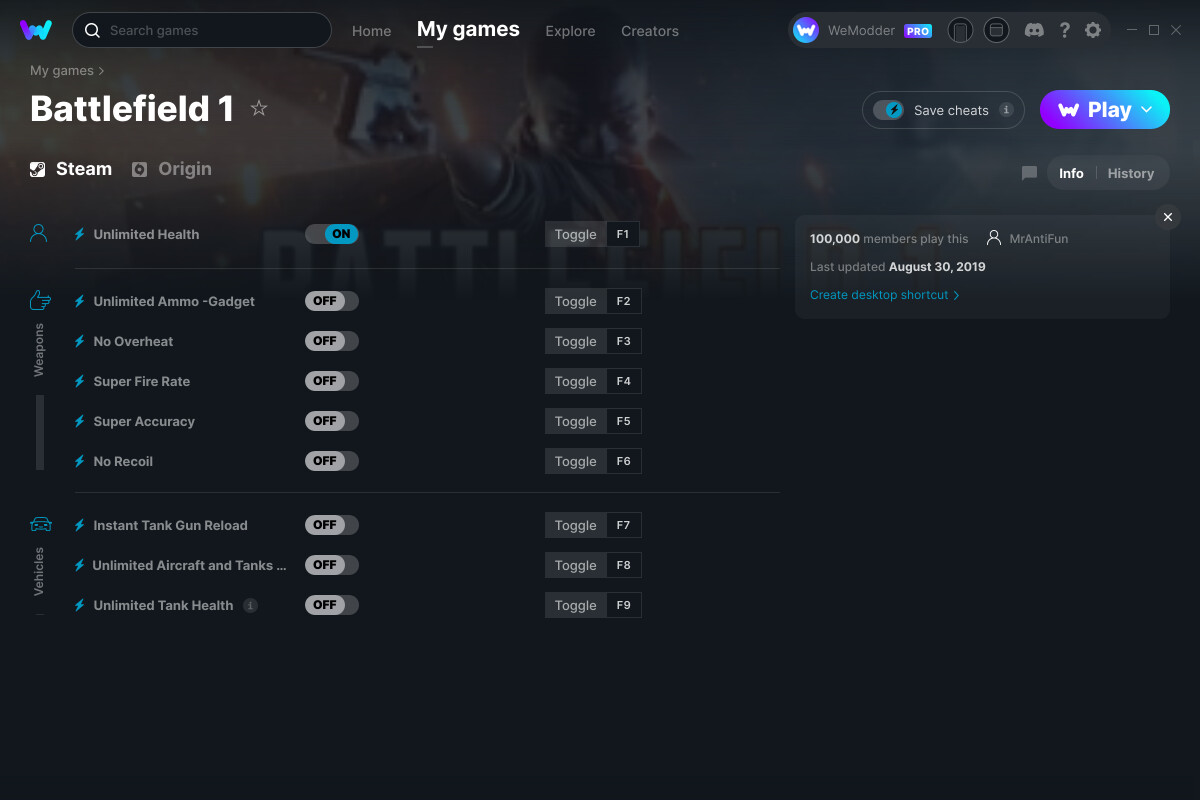 The Battlefield 1 cheats have been updated!

so i tried this mod out and the only thing that SEEMs to work for me is the rapid fire mod… and only on the sweeper on the medic class… and i cant tell if its client side (visually shoots faster) or server side (actually is shooting as fast as the gun looks.) and even then it only seems to be doing damage some of the time. also the infinite ammo one effects the GUI counter but not your real ammo count. in other words it says it has infinite ammo but uses the stranded gun mag size… only the sweeper with both rapid fire and infinite ammo on SEEMs like its shooting more then its normal 20 shots do to how many it visually is “shooting”… but still runs out of ammo. so still isn’t infinite. other then that literately nothing else for this mod trainer is working for me in the slightest. i may just be dumb and missed a step to get past an anti cheat? or maybe there is an issue with the trainer working with decent latency (came across an that issue with a weird mod for black ops1 years ago) any ways please help and fill me in of what i may need to do or be doing wrong or perhaps out of date now? thank you!

Please use English here thanks
Looks like something about multiplayer?
This is not for use with multiplayer trainers are made for singleplayer use
If that’s what your question was.

hello - thanks for the initial cheat, worked quite well…however, looks like it’s not working anymore

(yes, am looking to use just single player mode)

Looks like the game got an update in December 2019. Game updates will usually require the trainer to be updated too.

You can vote for this trainer to be updated via your WeMod desktop app. This link will help explain how: https://support.wemod.com/article/43-how-do-i-request-an-update-for-games

In case this cheat is not updated, anyone know how to remove/uninstall the Dec’19 update to the game? Thank ya.

I don’t think game rollbacks are a thing unfortunately. If games allowed that glitches could be used ect. It’ll be one of those things that it’ll have to be updated to work

I have a general question, there was no result of my research in the Internet. Can i still get Achievements on Origin, when i use Trainer for a game?

Yes wemod effects achievements in no way. Should be fine

Sorry if this is a stupid question but will I get banned if I just use this in the campaign? Just in case there’s been a fix or smthng.

No not if used for campain only. Online/ multiplayer probably will get banned

Can you please update the cheat. It is not working anymore.

Just an FYI. For anyone looking for a trainer for BF1 on Steam, this one can be used. Just point the trainer to the Steam BF1 install and it will work.