Thanks for this trainer. Will try it out, once I download the game.

Btw, can the 'Ghost mode" option be added for this title as well, similar to the “Bioshock 2” remastered one ?

can the 'Ghost mode" option be added for this title as well, similar to the “Bioshock 2” remastered one ?

it was the remastered edition

Does none of my queries, at least warrant a reply from your side, either YES or NO, be it related to trainer request or not ?

Few more topics, apart from this, where I was expecting some kind of acknowledgment. I know you might be hard pressed for time, and sorry to derail this thread as well, but just asking.

I really want a trainer for this game, it gets launched today, so making it in the future would be awesome! :smiley: hope someone can do that.

Homefront: The Revolution Cheats and Trainer

I think you might be correct. I just played with this trainer now, and I died 3-4 times, due to some near explosions caused by the KPA fight, or elsewhere. The 'unlimited health" option was enabled, but despite that I had to heal the player, every time that message appears (H key), or else the player will die. I don’t think GOD Mode is enabled, though I could be wrong. Only @STiNGERR can shed some light on this issue. Apart from that, all options seem to work fine for me. The game has als…

This is the official discussion topic of the Shadow Warrior trainer tool in Infinity. Please post any suggestions, bug reports, or praise that you may have for the tool in here! Available Cheats and Mods: Unlimited health One-hit kills Unlimited ammo No reload Unlimited stamina Get demon heart Get demon head Freeze enemies Add 5K money Add 10 karma points Add 10 KI crystals Teleport Important Notes:
Click here to view important information about this tool.
Supported Game Versions: This tool is kept up-to-date with the latest S…

Hiya there, @STN, @STiNGERR, @unknown_v2, @REPPiN, and others. Please, if you can look into this game, and implement the below trainer options, then it would be really nice. :grin: Painkiller: Hell & Damnation, the latest version on STEAM. I presume the version would be v1.10, (STEAM 06.04.2014 patch), which includes the DLCs as well, or otherwise. Though, I really need all the following options to be implemented, as I find this game too hard to beat, as it is very fast paced as well. …

I don’t think he visits the forums

Trainer causes game to crash sometimes. After I downloaded the trainer sometimes when I press esc to go to the menu (which is not related to the trainer at all) the game will crash. Other times when I press f8 to use the unlimited ADAMS cheat the game crashes as well. If you try to pick up ammunition while having max ammo cheat on, crashes as well. Please fix them if you have time, thanks in advance!

It looks like the December 20th update broke detection of this trainer. Anyone else having this problem?

I am having the same issue with bioshock remastered and bioshock 2 remastered since the update.

What do you mean broke detection? Infinity detecting a game has nothing to do with updates unless the game folder structure changes.

What is the issue you’re having?

It looks like the only issue is that this latest updated renamed the exe from Bioshock.exe to BioshockHD.exe.

will renaming the file back to Bioshock.exe from the updated BioshockHD.exe mess up anything with the game itself?
pretty much should I rename it so infinity can detect it or wait for infinity to be updated to recognize the new file name?

Rename it and see if it messes up anything. I don’t have the game to test it and the trainer author seems afk.

Sorry, and thank you for the link to this topic.

I like to inform you that changing BioshockHD - to - Bioshock didn’t work
The game would not load, because it’s missing the file to start.

So we have to wait for an update

If you’er having the same problem PLEASE POST SCREENSHOT to try to get this problem fixed faster. 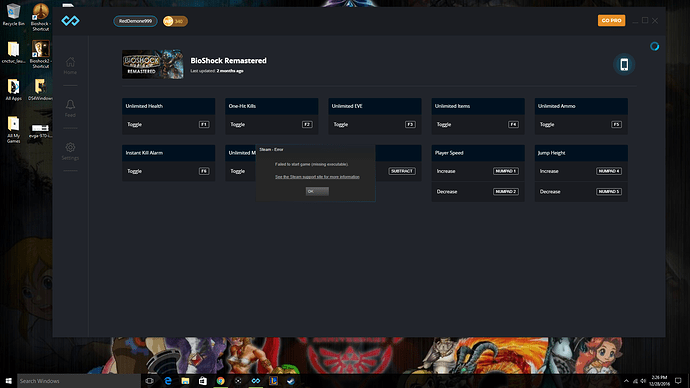 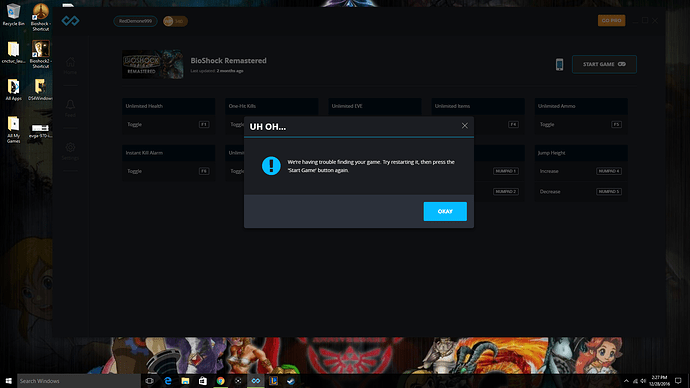 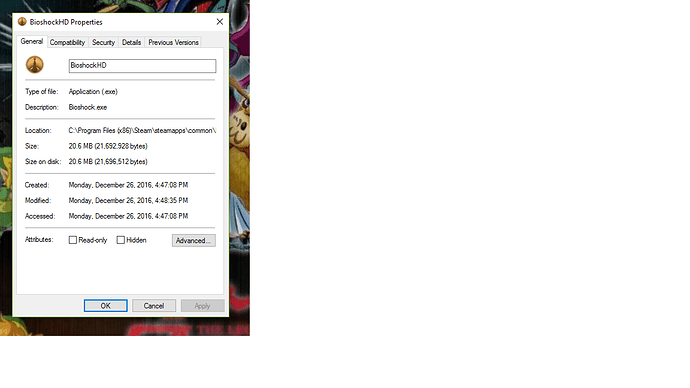 After you have renamed the exe, launch the exe directly (instead of launching it through steam). If the game boots up fine, press “start game” in infinity once the game has fully loaded.

Try to attach INFINITY, and activate the cheats, after you have fully loaded the Game’s level.

First, launch the game by clicking on the .EXE file, which is BioshockHD, or Bioshock.exe, after you have renamed it. Else, you need to wait for the trainer author/dev to update the trainer, for the new exe.

Don’t launch the game from the STEAM client, use the above .exe file. Try to rename it to Bioshock,exe, and check whether doing this, makes the Trainer to detect the game ?

After that, once the game level has been loaded, just ALT+TAB back to your desktop and start Infinity. Click on the START GAME button to switch back to the game.

When the icon says “End Game”, this means the trainer has been activated.

You can only change the installed path, if you get the FIND GAME button prompt on top right side. If it says, “START GAME”, then Infinity has already detected the game folder.

Follow the same tips as mentioned before in this thread:

Okay, thanks for the screenshot and your prompt reply. Yes my guess was in the right direction, as I think the executable file has been renamed to Bioshock2HD.exe, from Bioshock2.exe, IMO. Though I'm not 100% sure, but for the first title which is, BioShock Remastered, the exe file name has been changed via the latest patch/update. Give this a TRY. But first, make a BACKUP of the file you are trying to edit ("very very Important"). Try to rename Bioshock2HD.exe, to Bioshock2.exe, and c…

OK I Did It It Working Thank You…

Thanks for the update, you’re welcome.