Evil Dead: The Game Cheats and Trainer for Epic Games

This is the official discussion topic of the Evil Dead: The Game Trainer and Cheats in the WeMod app. Please post any suggestions, bug reports, or praise that you may have for the cheats in here! 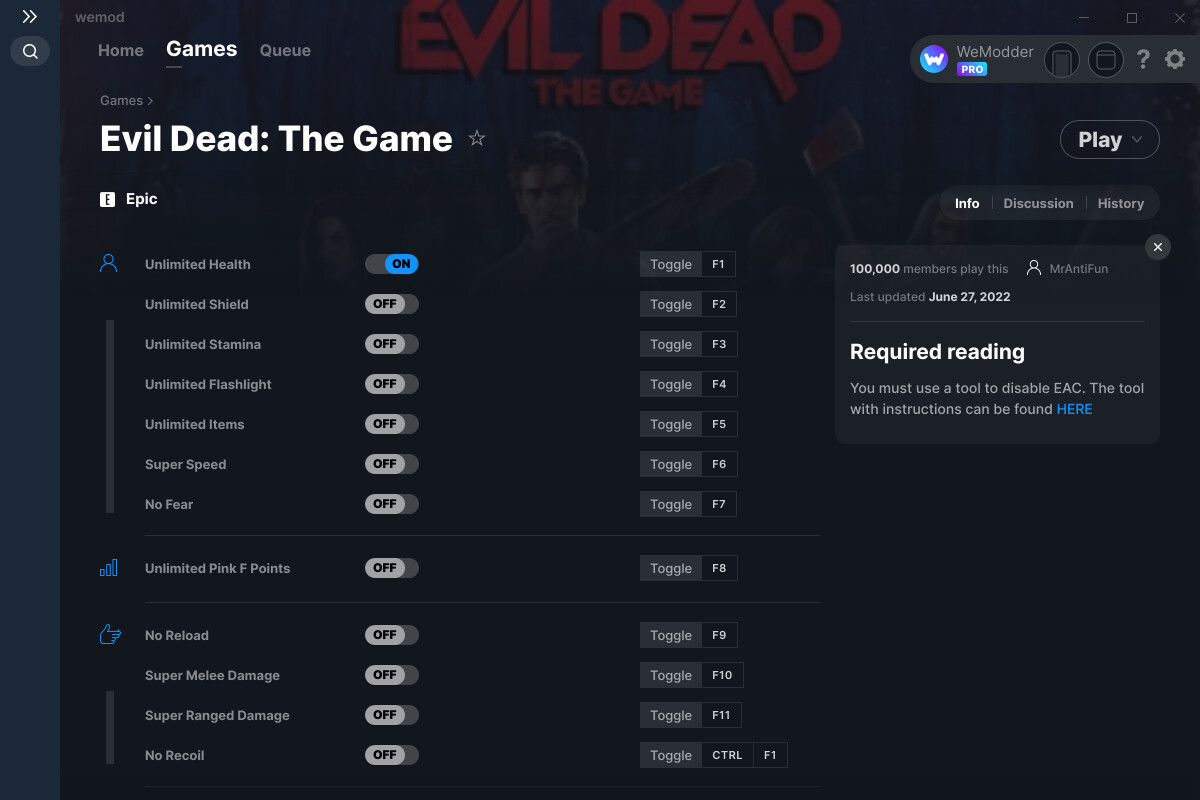 Thanks I will try it today.

After I try the the Survivors vs Demon (Solo), when I fight the Dark Ones, player will bleed out instantly, but still can use melee weapon only to fight Demons but cannot fight Dark Ones.
I have no problems for the Missions.
Thanks

This is just for missions, right? I don’t want to have people using this online.

On that note, this ain’t gonna get me banned for using it in missions, will it? (that s*** is way too hard)

Yeah, only seems to work while solo, mods don’t work online (think the flashlight works). So you can’t use this to level which sucks. Cool trainer though.

I don’t quite understand why people keep asking about being banned using every trainer, this is cheating so there is always a chance. It’s the price you take using Wemod.

You will not get banned for using this solo or on single player missions. The trainer will not work on any other modes as it is not intended to.

The Evil Dead: The Game cheats have been updated!

An unlimited spirit points/ xp would be neat

Honestly would not want these cheats to work online. @AnEUGamer suggested a cheat to increase spirit points and/or experience for characters, which I would like instead.

I used this in the missions to unlock the extra characters, took me about 28 minutes with the super speed on. I instantly turned the game off and wemod with it before booting it back up after I was done. Obviously I didn’t attempt multiplayer with it, but can I get banned for using it in missions even once? Please let me know.

is there gonna be an update anytime soon ?

The Evil Dead: The Game cheats have been updated!

The game cheats worked perfectly when it was first released. Why F it up?
Now it does not work. Telling me that I’m running a 32bit version of the game.
When you purchase a game, it doesn’t offer a choice between 32bit or 64-bit versions.