sounds weird but try running as admin from the game directory at (D:(folder name)\Ghost Recon Breakpoint
Or (C:\Program Files (x86)\Ubisoft\Ubisoft Game Launcher\games) if this doesn’t work try running through uplay launcher then close the game and run from the directory if the issue persists add an AV exclusion run then restart pc try again if you need help contact me on discord (Cryken<#6580).

Undetected does not work. Had no issues with the rest but the best one will not work.

It doesn’t work. I crash when I open the game, like I can’t bypass BATTLEYE. It’s like it just kicked me off the server. It will return to the computer desktop

It’s like it just kicked me off the server.

“Server” implies online gameplay. Trainers are never intended to be used online, no matter where you get them from.
If you’re playing offline, the trainer will work as long as you followed the bypass instructions at the top of this thread correctly.

Yeah you right says the game cant be activated now, seems they done some sort of patch, Offline doesn’t even work.

If you would, at your earliest convenience…please make a Battleye BYPASS LAUNCHER in 2 split versions:

Ghost Recon Breakpoint Shortcuts, Side by Side view of their properties, showing exactly the launching process the game is using. Hope this helps! 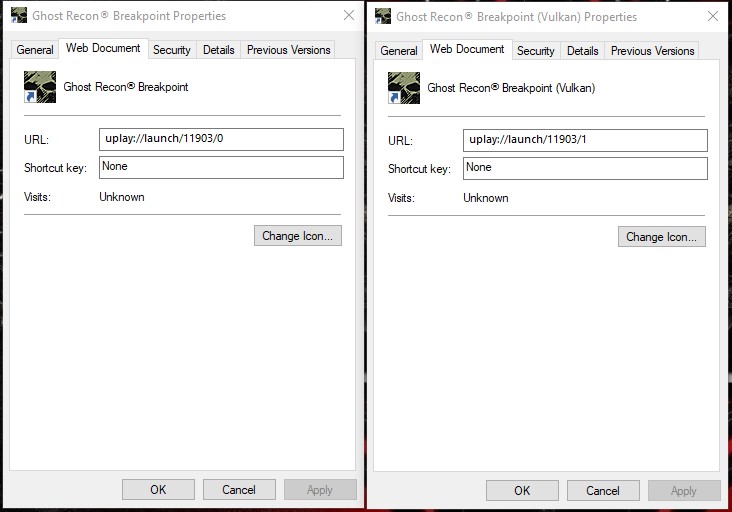 You have no idea how unbelievable AWESOME this would be if you could make this addition for us all. I will be greatly appreciative if you can do this, as soon as possible

May The Force Be With You…and The Odds Be Ever In Your Favor!

Same thing is happening to me. I did every thing I was supposed to do. But no matter what I do, it pops up a UPlay thing and looks like it is trying to install Battleye.

No, it crashes when I just open the game and enter, and I haven’t even started to select characters

Make sure you are following the instructions correctly.

I have the same issue as mentioned before, most of the cheats work. Only “Undetected” does not work anymore and is, indeed, one of the best one. So, please help us, plz.

I have the same issue as mentioned before, most of the cheats work. Only “Undetected” does not work anymore and is, indeed, one of the best one. So, please help us, plz.

The Ghost Recon Breakpoint cheats have been updated!

verified files, then renamed the GRB_BE.exe to GRB_BE.exe.bak, tried to launch the game through the desktop shortcut and it wont launch, am i doing something wrong?

is there a new GRB_BE.exe that points to the vulkan.exe?
its still starting the normal DX11 exe even though there is a vulkan version of the cheat

Ya you will need to use that trainer not this one.
https://community.wemod.com/t/ghost-recon-breakpoint-vulkan-cheats-and-trainer-for-uplay/132027/11

Thanks, because the option is there i thought the trainers are the same

i tried your instructions and it is now stuck on installing battleye. how do you know if you have the vulkan version? im curious if thats my issue

Hello , i wanna ask , if i use cheat only for single play… i wonder after i use this cheat trainer and then after play it , then i quit and i remove cheat from directory files, then i play with official uplay, is the cheat still have in there?
for example money cheat?
i hope some1 out there know about my point is