[/img]Fall is here and along with it is the busiest time of the year for gamers, and while there’s plenty to look forward to with new game releases in the coming weeks, there’s still plenty of opportunity to grab some of the year’s earlier titles thanks to Xbox Live’s Deals With Gold.

A fresh set of deals from Major Nelson’s Blog revealed the latest titles being discounted in Deals With Gold, which provides a new set of sales on titles across Xbox One and Xbox 360 each week.

In particular, this week’s deals include discounts on a variety of recent hits for Xbox One owners including Dying Light, Mortal Kombat X, and Middle-earth: Shadow of Mordor at varying discounts, while over on Xbox 360 users can nab cheaper prices on games such as titles from the Batman: Arkham series and the LEGO titles.

This week’s Xbox Live Deals With Gold will be available now through October 5th, 2015 – you can check out the full list of titles discounted for Xbox One and Xbox 360 below: 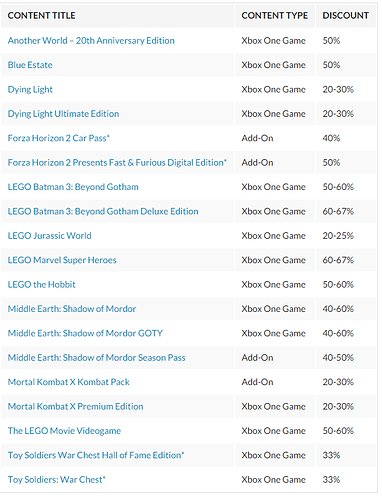