I bought the game on GOG but all cheats work pretty well. The only problem I seem to be having is the CCTV Monitor going inactive when a guard is using it and the other security consoles glitching (lights blinking really fast) when Instant Building is active.

I know this is for Steam but I really don’t have any choice since there are no other trainers for this game out there (at least none that I find the least bit sketchy).

Is there any chance you could look into adding a GOG version, MAF? Thank you.

I recall this being a game bug that people who do not use WeMod may also experience. 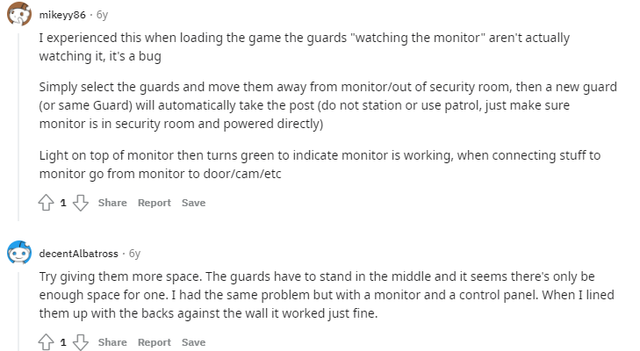 Thanks! I saw this post too when I was trying to figure it out. Unfortunately, it’s not what’s happening in my case.

On my end, basically, if a guard is up on the console, the guard and the light glitches and blinks really fast as well as going between active/inactive a lot of times in just a second. It seems like the guard only gets access to the console for a millisecond then disconnects then does it again. The console shows active when no one is manning it though.

Can’t explain it well, haha. So, I just capped a short video:

And I just noticed this happens to all the consoles essentially, even the Scanner Monitors. Disabling Instant Building immediately fixes it though.

However, I do understand that this trainer is for Steam so bugs are to be expected and this isn’t a proper support thread for this issue. Sorry.

New update or bug fix may be needed.

The option “Instant Building” does not currently work. But thank you for this nonetheless.

I want to say can an option for escape mode be added? such as inf rep or unlimited health
You dont require adding it but I just thought it would be useful to test maps.

The Prison Architect cheats have been updated!

What cheats aren’t working for you? Are the cheats toggling off?

Are you using any other mods for the game at all?