[/img]Backwards compatibility will allow Xbox 360 games to work on an Xbox One console and to use new features of the Xbox One such as Game DVR, Snap, Twitch streaming and screenshots grabbing. All your previous save files, DLC add-ons and achievements will carry across, and if you are playing an Xbox 360 game on your Xbox One, you will still be able to cross-play with friends using an Xbox 360. All future games released on the Xbox 360, and any games provided for the Xbox 360 for free through the Gold Live service, will all be backwards compatible by default.

slowly the list of compatible titles is starting to emerge and we will continually update this list as each title is revealed. Microsoft has informed us as of Gamescom “all future Xbox 360 Games with Gold titles will be playable on Xbox One,” and it’s believed that upcoming games available for Xbox 360, will also be backwards compatible out of the box. Bookmark the page and come back regularly to see if your favourite game has been selected, so it can move from your pile of shame to its rightful place in an Xbox disc drive.

Note: This list has been put together from a collection of sources, including official releases and imagery, and interviews and insights provided by specialist press. They should be taken as an educated guide until officially confirmed. 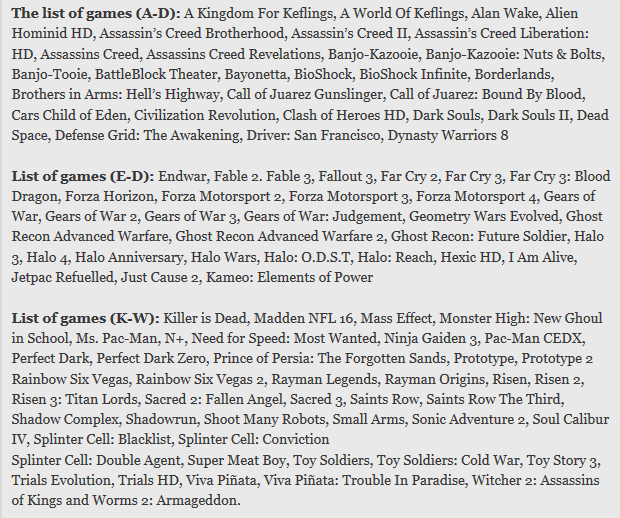 Fallout 3, Gears of War, Halo, Halo Wars, Fable 2, and even Soul Calibur IV… God damnit Microsoft. Why could you not do this early. Oh well guess I just won’t leave my house for the rest of the summer…

Time to get forza 4 yeaah boii

Halo: Reach is on there! Now I feel like I can upgrade!

ok, maybe I missed somthing, but when is this goin to happen?

Wft where is Skyrim!!!