Sins of a Solar Empire: Rebellion Cheats and Trainer for Steam

This is the official discussion topic of the Sins of a Solar Empire: Rebellion Trainer and Cheats in the WeMod app. Please post any suggestions, bug reports, or praise that you may have for the cheats in here! 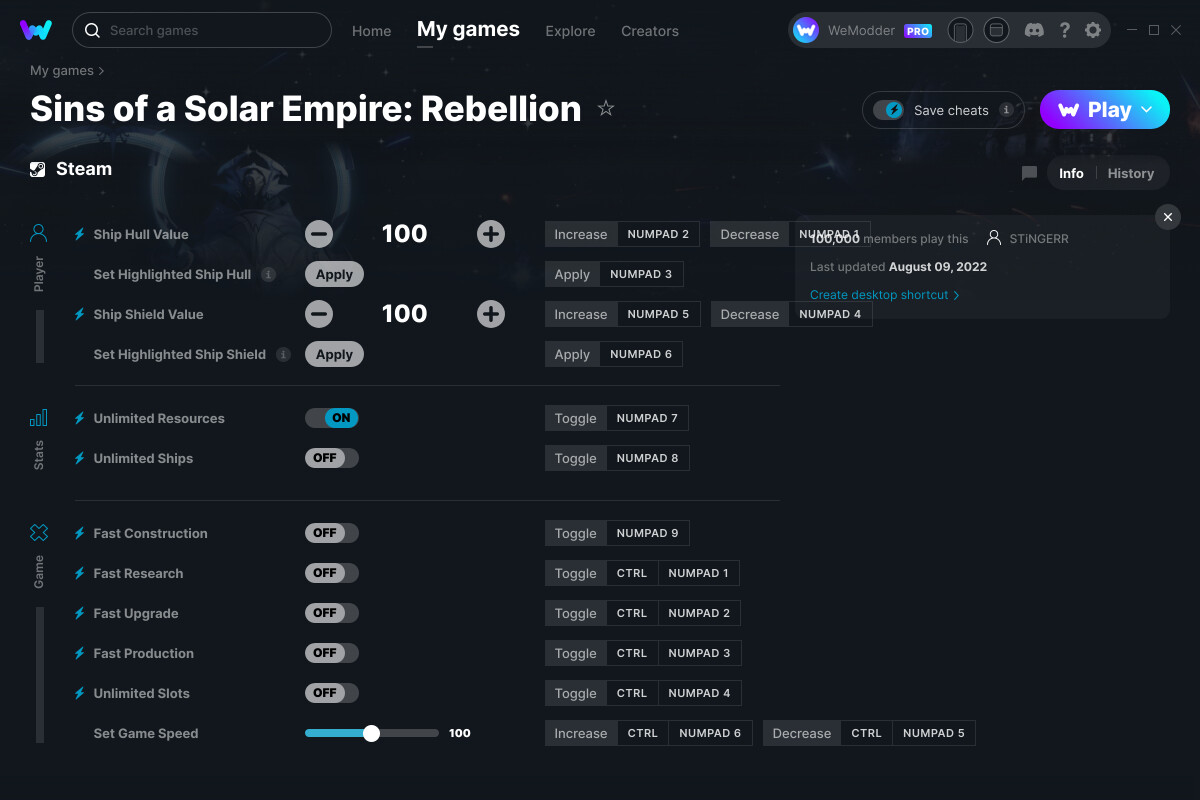 The Sins of a Solar Empire: Rebellion cheats have been updated!

The Sins of a Solar Empire: Rebellion cheats have been updated!

On game start up, it goes into a Stardock player. Do we need to go offline on steam to enable the trainer as to not get any VACS? Thanks.

Does this give the enemy unlimited resources as well?

No it shouldn’t, should be only you that has the effect

Well… In some games the AI is specifically scripted to cheat in order to try to beat the player, particularly in RTS games. For example, in a lot of RTS games, the enemy AI will often cheat to give itself enough resources to build an army to attack you. Otherwise you’d probably get bored quite quickly without an additional challenge besides resource collection.

Age of Empires is most famous for this. Eagle-eyed players quite early on in higher difficulties noticed that the AI team was producing quantities of troops that it couldn’t possibly have collected enough resources for on time. And the developer, Ensemble Studios, admitted the AI cheats.
Or, another example, have you ever played a FPS game and all of the sudden a random enemy seems to spawn behind you and nearly kill you? (cough - Call of Duty) That’s not a bug and no, you don’t need glasses - that’s the AI cheating. Also noticed the enemy in FPS games never run out of ammo or chucks more grenades at you than they can realistically carry?

The trainer most likely doesn’t give the enemy unlimited resources, as @ptondo said. But that doesn’t mean the AI enemy doesn’t use other means of cheating (on purpose).

everytime i try to run the wemod program and play S.O.S.E. it just crashes

Went i starts sins on steam it’s good but every time i starts sins with wemod it’s crash on the loading game please can you fix it ?(or say it’s on my game version it bug that way ;D)

update: i try the one who is 1 year old and it’s work the game does not crash on the loading XDD

update: i try the one who is 1 year old and it’s work the game does not crash on the loading XDD

This indicates that your copy of the game is probably massively out of date (ie - because it’s cracked). If that’s the case, the problem is your game, not the trainer.

I started trying to use this trainer, and my computer immediately alerted me to a Trojan Virus that came from it

Trainer not working anymore? Everytime I try to use it, I get a warning that the cheats failed to download. It was working fine 3 days ago, but for the past 2 days I get this error all the time. I have tried using all the fixes in the FAQ but to no avail, even a full reinstall of wemod didn’t help… What’s going on?

Nope i have a version on steam not crack and i have no update for it (steam don’t update it so nope) or i have to the update manually ?

yeah, it just crashes
Edit: took me a few tries to get it to not crash

I don’t know if I did something wrong or not but the unlimited resources doesn’t work, going through steam and wemod says the game has gone to 1.96 since this trainer was updated, it might’ve gotten broken by the new update?