You didn’t search for it did you?
Anyways it says it’s unsupported due to “technical aspects that make it impractical to hack.”

No, don’t worry i searched, i’m not stupid ^^, maybe he didn’t show up because of this reason.

Well I simply typed in star wars and it showed up. It has to show up for you as well.

Couldn’t they have the cheat check to make sure it’s being played in single-player? Or does the character carry over to multiplayer? I’ve not played KOTOR2.

The game doesn’t like infinity being injected. I had a really cool option actually for it - Friend of everyone! - enemies become your best buddies.

I realize that this thread is old, however a SWTOR 2 trainer is indeed possible. Perhaps your Infinity injection running into the Anti-Cheat Code they have ingrained in the coding? I have one trainer for it I enjoy, only thing it’s missing is infinite items like medkits and so on. It’s nothing major, it’s like Bethesda’s Anti-Mod code and disables certain things until gamers play fair again.

Normally altering the ini file in its main folder will allow the use of cheat codes that the developers made for the game. Howver with the current PC/Mac updates over the past 5 years, using the developer cheats will break save games and force players to restart from a point before they used cheats.

why cant i vote for it?? it keeps telling me the trainer is in development?? 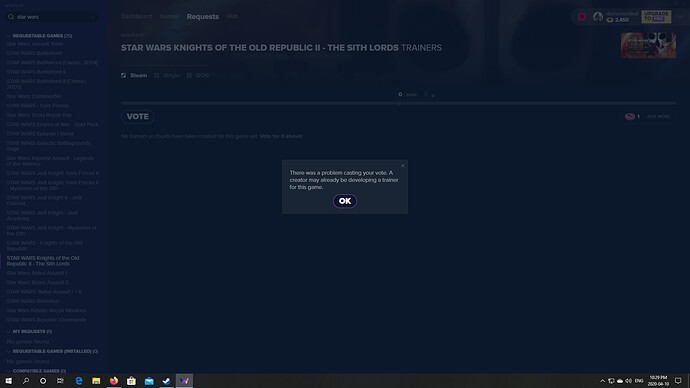 @demonsmiled - As stated in previous posts above, the game is incompatible with WeMod’s software. This is the fault of the game developer, not WeMod. Sorry about that.

If you search for the game here you’ll get a better explanation why you can’t vote: https://www.wemod.com/cheats/star-wars-knights-of-the-old-republic-ii-the-sith-lords-trainers.