State of Decay 2: Juggernaut Edition Cheats and Trainer for Steam

It is working fine for me. It only stops your ammo from going down, if you do not have enough to reload already then it won’t work.

trainer’s out of date due to the update yesterday, @MrAntiFun, think you can patch/update the trainer for update 28?

Edit: so i tried to use the codes with update 28, it seemed like it was gonna be fine and didn’t require an update to the hacks, but out of nowhere he game crashed, i thought it was just my ext drive, but no, it seems the game hung on something related to the version of the cheats, as it crashed a second and third time using the cheats, but didn’t crash once when letting the game sit for about 2 hours without the cheats active

hey sorry quick question but does the trainer work on daybreak?

Memory is a bit rusty here, not played the SoD franchise in a while. Isn’t DayBreak an online co-op DLC?
If it is, then no, trainers are not intended for online game modes. This recent post explains why: How to use WeMod in Co-op Multiplayer Godfall? - #2 by Ravenfyre.

If it is possible to play the DayBreak DLC solo, then the trainer should likely work, yes.

Is it possible to get a “Remove Trauma” cheat? Unlimited health doesn’t matter when you can get 2-hit by anything due to lowered max health. I turned on unlimited health and then threw grenades at my feet only to find out that I, in fact, do not have unlimited health. Feels bad :C

Same issue with plague, actually. We can remove Fatigue but not Plague and/or Trauma?

Just tried it last night and one major thing I noticed is Unlimited Health also works for Hostile Enclaves. I had that Warlord Quest pop up where you need to go talk to a Enclave that has lots of weapons but are overcharging for them and you can respond to make them hostile.

I noticed that my gun wasn’t doing anything with 10 shots in them so I tried a a bloater gas grenade which should kill them in just a few seconds and nothing. So then tried turning off the cheat and they died pretty quickly.

This was on Lethal Difficulty and the newest update to the game.

The others I tried worked fine which are
Unlimited Stamina
No Fatigue
No Reload
Unlimited Ammo
and from what I could tell Unlimited Durability.

Hopefully the health thing can be fixed soon. Until then I will just use the HadesMod Menu over on Nexus for unlimited health.

latest release due this month…

Hope we will get a new release very quickly…

Everything is working fine for me. What is your build and update? 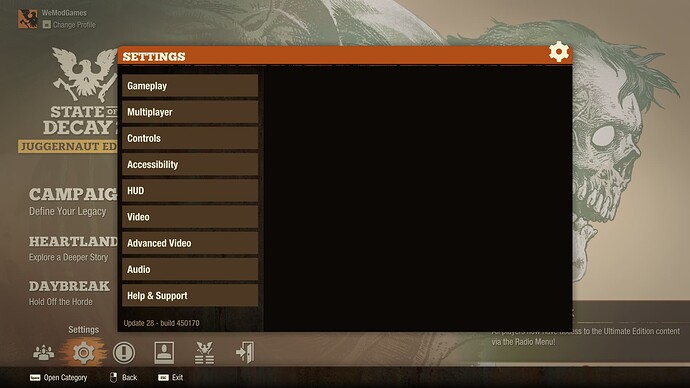 Hello, I would like to know if it is only with me that this problem is happening, I squeeze “play” and enters normally, but when I squeeze the shortcut to activate in cheating, it just does not activate.

Which cheat(s) is this?
And are you playing the game in solo-mode?

small issue, with the latest update that happened today, the unlimited durability cheat refuses to turn on it forces itself to be deactivated.

Both “No Reload” and “Unlimited Durability” was broken by update 29 to the game. (Steam version for me)

The Unlimited Ammo was also affected by this. even though it turns on, unless i have more then 1 clip, i cant reload without the non reload cheat, making my ammo run out.

it seems a good bit of cheats are no longer working propperly with the recent fields of view update(update 29) and i’m running the steam version as well.