This is the official discussion topic of the Alien Isolation Trainer and Cheats in the WeMod app. Please post any suggestions, bug reports, or praise that you may have for the cheats in here! 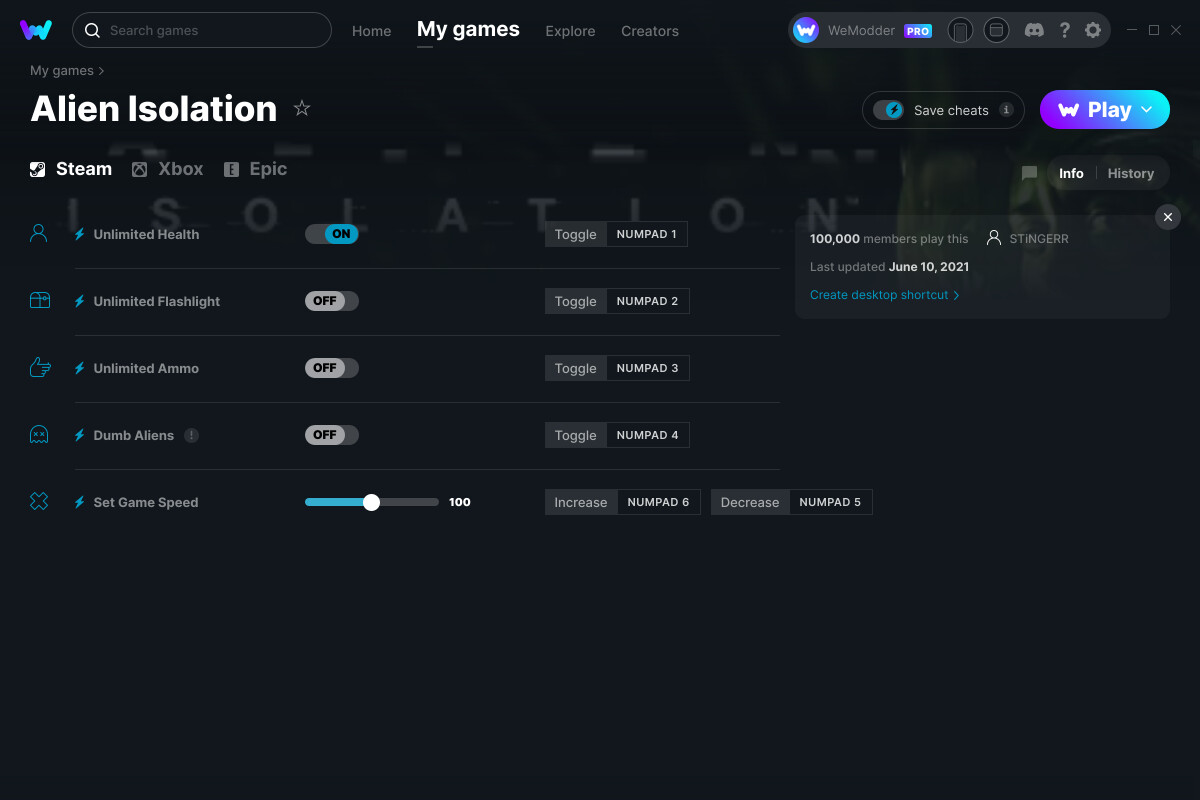 Awesome, thanks! I’ll test that ASAP and leave a feedback after a bit of use.

Okay, so my main and first concern was about the “Dumb Aliens” point. I wanted to see more clearly what it would imply.

So, the Alien is still hangin’ around, looking for victims. If it sees you, it’ll run to you and do nothing. He will start following you around like a nice henchman and not attacking you. It’s a bit stressfull when you’ve been playing the game normally before, but you get used to it.
But note he will kill you if you enter a vent with him on your tail (I assume that’s what the information tooltip meant with “scripted event”).
So don’t keep him nearby when you need to enter a vent, get him away with a flamethrower.

So here’s a list of stuff I’ll try to figure if an enemy sees you when on “Dumb Aliens” mode:

I’ll keep editing this as soon as I have answers.

Unlimited healf / flashlight and ammo are working as intended. The game speed is pretty cool, especially during the long phases of waiting (for an elevator, or during long walks).

Thanks for the nice job!

I was thinking… I’ve seen some ways to change a simple bml file in a folder (for the Steam version) to simply disable the alien AI. It’ll spawn, but essentially will stay still except for the few scripted animations. Maybe a tweak would be possible to do in the trainer to achieve such a result?

It does; you still have to reload your active ammunitions, but the total amount won’t get down.

The Dump Alien cheat is annoying, in the end of mission 1, if the alien sees you on the way into the elevator thing, then you cannot escape.

Are you referring to being stuck in the train/elevator thing, like the doors never open?

If so - this is a game bug, nothing to do with WeMod. I also experienced this on the Steam version during my non-cheating playthrough. You will need to reload an earlier save, unfortunately.

Here are similar reports from non-cheaters:

well yea thats the situation i think of, but not about the doors never opening, when i go into the train i cannot press E as long the Alien is there… therefore being stuck as long it is around, and it is pretty hard to dodge it at this point.

Add an infinite items mod. Thanks