This is the official discussion topic of the BioShock Infinite Trainer and Cheats in the WeMod app. Please post any suggestions, bug reports, or praise that you may have for the cheats in here! 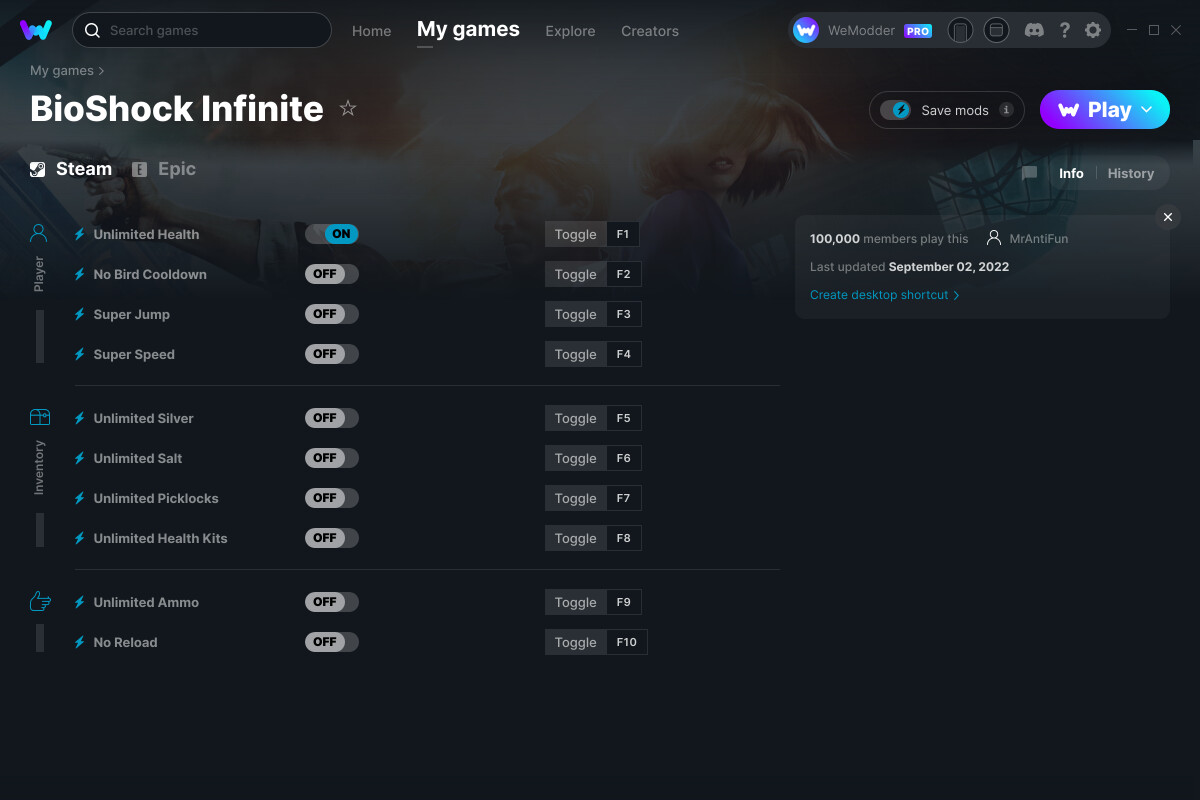 will the trainer work with the DLC’s as well?

If you decide to test, do let us know the result

so i tried it with both episodes of dlc and they did work. although all i use is health, salts, and ammo so i am not sure if all the options work but those work for sure

I’ve been using Unlimited Salt, Picklocks, Silver and Ammo. I don’t know what happened but after I restarted the game, the upgrades you get in game for Max Health, Salts and Shield bugged. It’s like I have picked 999 upgrade bottles and the possession spell is broken, salts bar shows no salt and I can’t cast it. Other spells I can cast just fine but salts bar shows hundreds of tiny segments (Number of possible casts).

Salt bar is empty
This is a side-effect of cheating in the game. It is caused by every trainer I have used on the game, not just those available on WeMod. It’s only visual so you’ll learn to live with it.

Possession spell does not work
Again, this is a side-effect of cheating in the game. And again it occurs no matter what trainer you use, WeMod’s or not. You’ll have to get through the game without using this spell.

The salt bar is huge
Another side effect of cheating that occurs with every single trainer in existence, not just WeMod’s. It’s only visual so you’ll learn to live with it. It may reset back to normal size when you reload the game.

These are issues that cannot be fixed by a trainer update. They will occur in the game no matter what trainer you use because, as said at the start of the post, Bioshock is very anti-cheat. Cheating in all Bioshock games, not just Infinite, will cause some issues. It’s not something WeMod can fix, it’s a game issue not a trainer issue.

Thanks for the quick reply and the heads up!

I used it throughout the main game and it works great. The bugs with salt and health only kick in when you actually pick up an infusion for them. So if you need to use the possession one for achivements just make sure to not pick up any salt infusions before that.

Also, I used the trainer on the DLC and it works. But I was using only the salt one to get my way through the 1999 mode and still make it more interesting, but the other cheats just kicked in either way after a few reloads. =/ (just in case someone wants to use just a few/one cheat instead of all of them)

Thank you! This was preventing my progress

The BioShock Infinite cheats have been updated!