This is the official discussion topic of the Computer Tycoon Trainer and Cheats in the WeMod app. Please post any suggestions, bug reports, or praise that you may have for the cheats in here!

Hello and thank you.
I cannot enable unlimited money and logistic points.
Rest two can be enabled.
Can you check.

Welcome to the community @samanimatru.

It looks like the game received an update, which means the trainer would also be in need of an update.

You can request updates for trainers via the WeMod desktop app.
This link (which includes a video) will help explain how: How do I request an update for games? - WeMod Support 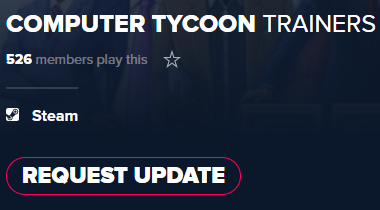 Hi.
I am paying an amount of money to WeMod but am I still have to pay another money just to get the trainer upgraded. The money that I pay is for to use the trainers but you want me to pay more.
Which part of this is equal.

You do not need to pay to use the trainers or to have trainers updated.

Votes for updates are free. You gather free WePoints though completing the objectives in your WeMod dashboard. Such as using WeMod with a game once every 24 hours. You then convert these free WePoints into votes.

You also have a referral link in your dashboard that you can use to invite others to vote as well, while being rewarded for it.
Aside from that, free games are also posted here in the community for you to grab while waiting for updates and to help you accumulate WePoints by giving you more games to earn them in.

I think only 9 people have voted and it isn’t even an 100 votes out of 1000. It seems like no one is going to boost it. So either way I am stuck at this point.

Each vote bumps a trainer higher up the trainer developer’s to-do queue. So the more votes it has, the quicker it’ll get updated.

Unfortunately, this particular game does seem to have a small player-base, which isn’t WeMod’s fault but rather the fault of the game’s own marketing team for not attracting more attention to it. But bear in mind the trainer exists because the player-base voted for it to be made, so eventually they’ll probably join in with the votes for an update as well.

Don’t forget your WeMod referral link. Sharing it in other communities (ie the official forum for the game) will encourage others to come and vote too while you get rewarded.

need an update for trainers to computer tycoon. have VERSION 0.9.6.0h02 on the game at steam

Requesting updates here in the forum is not how trainer updates work here at WeMod.
Game updates are detected automatically. You need to add the game to your WeMod favourites so that the trainer developers can see how popular a game is and prioritise trainer updates in a queue depending on the popularity of them in the community.
See here: Game Queue - WeMod Support

However, seeing that the game had had an unreasonably excessive amount of updates this month (three updates in three days), it will be smart to put off the trainer update for a few additional days in case the game updates again, undoing all the trainer developer’s hard work.

Feel free to grab a free game from the Deals section of this forum while you wait.

Read the post above yours.
Forums are for reading too, not just posting.