Earth Defense Force 4.1 The Shadow of New Despair Cheats and Trainer for Steam

This is the official discussion topic of the Earth Defense Force 4.1 The Shadow of New Despair Trainer and Cheats in the WeMod app. Please post any suggestions, bug reports, or praise that you may have for the cheats in here! 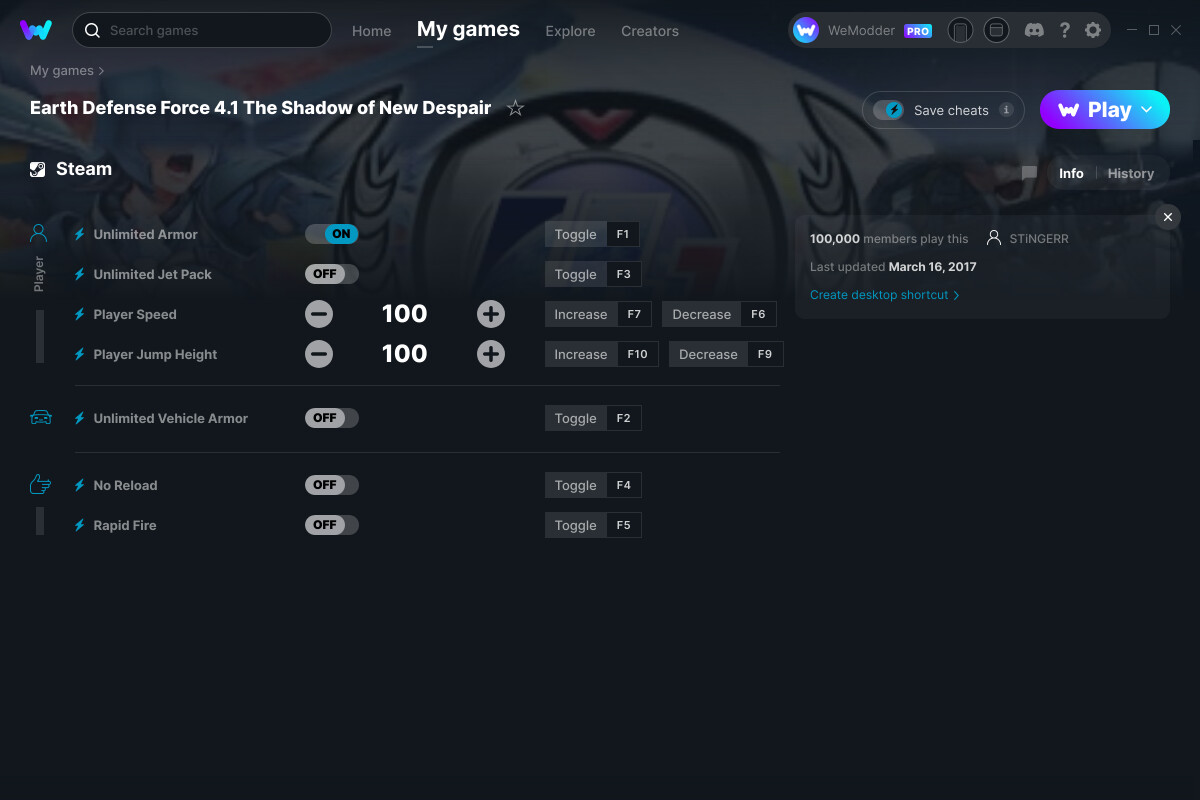 Need Weapon unlocks, including Genocide Gun and Armageddon Cluster (which aren’t unlockable normally) as well as all other weapons.

Just finished the game. Many trainer features still work fine, though you do get the incompatible message… Never could get the speed and jump distance to work, although that might be character driven (played as a ranger).

Unfortunately, due to the most recent game update, my game consistently crashes on the “high octane” sections with tons of enemies, even on the lowest resolution possible, but only with the trainer on. Otherwise, my game plays perfectly on HD settings. I would be greatly appreciative if some optimization were to be done.

The player speed and jump hight do not work for me as the Ranger. I have not tried it on other classes yet. Could you make a cheat to get all the weapons unlocked for all classes?

You can still die with unlimited armor on

It would work once then completely stop working anymore.
Like even when I rebooted.

Well being your are the only comment in 1 year i doubt it. To be truthful

Wasnt trying to be smart but i asked in borderlands thread and never thot about it but stn said it would not be fair and alot of pissed of people if i update this old game and not so popular when there is so many more newer and more popular games that need an update or cheats added.

If you understand the basic of memory edit, you can solve the death issue with low armor. Go to an easy level, pick up armor boxes and keep searching for the current amount. After you find it, just change it to a good amount, so when you end the level that will become the armor upgrade bonus. If you have +2000 armor, you can survive any Inferno mission.

Just an advice, if you going to add some huge number like 50k, the reward screen will take quite a while to end, and it most likely that you going to need to force the game to close, after the saving message. So, just change to like 500 units and you are good.

is there any chance we can get the trainer updated/patched for those of us who still play it to this day?
i ask because through the wemod launcher it says “request update” and the last time it was updated says 3 years ago.

This game is unfortunately not very popular among our users. If you want to help move it towards receiving an update, voting for it in the WeMod app by selecting the request update button and the amount of votes you’d like to contribute is the best way

hey, you can still be knocked out. happens from your own weapons. plus the vehicle still get destroyed. both of these happen a lot on legendary.

Everything seems to work, but not Health/Armor for player, I tested everything recently, so not sure if we’ll get updates on this trainer.

I’m having problems disabling the cheats after using them or after exiting the game completely. The cheats that are stuck in on-mode are No Reload and Rapid Fire. I’ve checked the game’s integrity through Steam and nothing came back as an error, and this seems to affect ALL of the classes, not just Wing Diver. Please help in reversing this problem unless I have to delete my save and game to fix this.