Hitman 2 Cheats and Trainer for Steam

This is the official discussion topic of the Hitman 2 Trainer and Cheats in the WeMod app. Please post any suggestions, bug reports, or praise that you may have for the cheats in here! 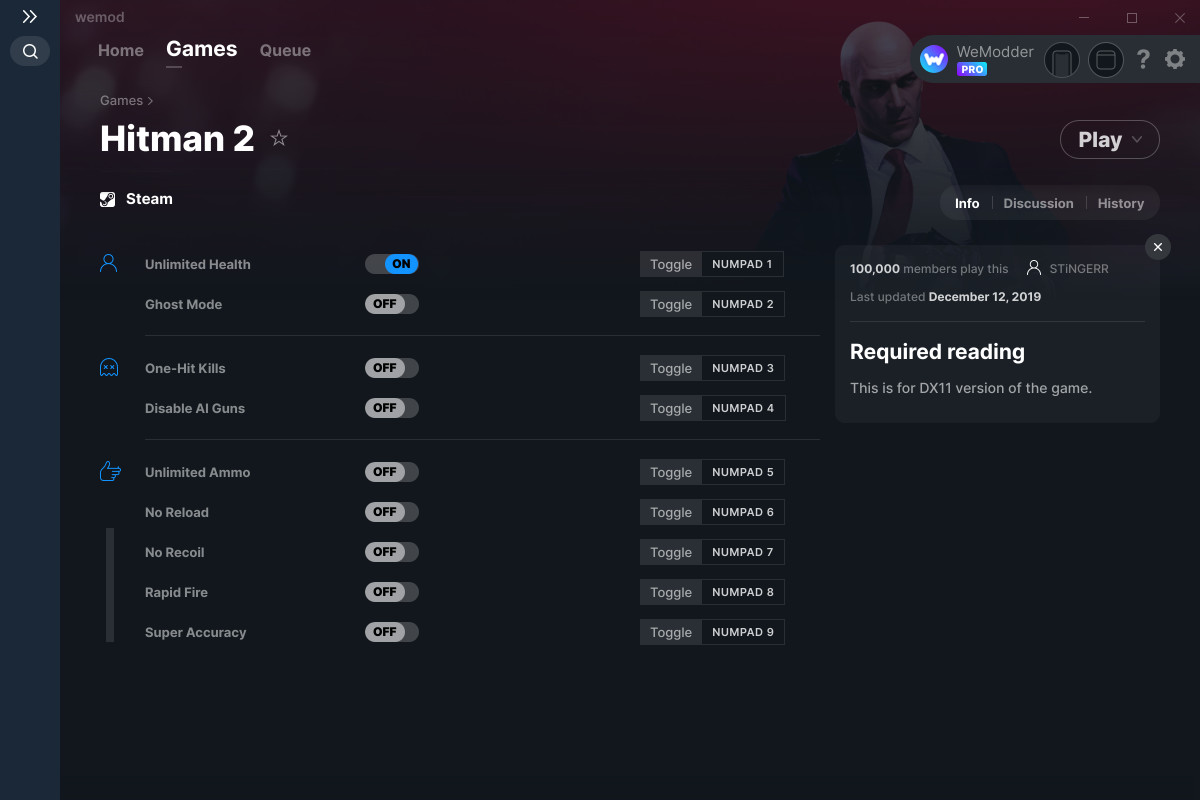 Nice! Would be even better with a feature that would slow down time so you can do some cool moves and also one that speeds up time so you can just run through the map faster.

anyone having issues having it connect to game as all my other ones work but not for this one???

Cool, thanks! Any possibility of unlimited XP?

Nice :D, is possible to add on features ? (teleport)

THANKS!! could you maybe add inf explosives?

Hey Stingerr! First off i just wanna say thank you so so much for the HItman 2 and the other trainers you’ve created for Wemod! I’ve encountered a small problem with Hitman 2 trainer atm. Regarding three cheats: invulnerability,No Reload and Infinite Ammo. They dont seem to work and i keep getting “Hitman 2 exe doesn’t have a disc” information warning when i press the keys wich set off the cheats

Probably because of the update. Stinger should update soon.

theres no request update button so i request here ty

The Hitman 2 cheats have been updated!

Well the game doesn’t freeze on hitting “PLAY” anymore, but it still says it has troubles loading the cheats

Have you completely quit the WeMod app by opening the system tray, right clicking and selecting quit? If not give that a go and let me know if there’s still an issue!

Ty for the help anyway

Tried as you suggested, Ran WeMod as admin, Tried starting the game Via WeMod, same issue.
Then tried restarting both Steam and WeMod (ran WeMod as admin again), Started Hitman 2 Via Steam, then hit “PLAY”, but still the same thing happens.

I’ll maybe try just leave it a little while and see if that helps, thanks anyway.

I’m roping in a dev to try and help solve this, the information he would like to know is “what’s the exact error message, and how long till it pops up after hitting play?”

I should have asked, are you running any anti virus? Some of them interfere with WeMod