It's my first time - help please with minecraft map

I have watched a LOT of tutorials but even though Horizon is saying that the package (I have tried with two maps both .bin) has been successfully transferred but it is not visible anywhere. in the videos I’ve watched when you click on game/minecraft after you have injected the map it should show there but there is nothing.

I’ve tried taking it back to the console but whilst the profile is there and can be moved back there is nothing under the game.

The video I watched said I had to transfer a world from console HD to the flash as well as the profile so there was something to inject it into?

I’m a bit lost tbh. It’s my (young) son who is desperate to play the maps like Stampy and I promised him I’d fix it.

The map I am trying to get is The Infected Temple by Mutant Marine Version 2.

Eternal thanks for any help you guys can give,

You’re not the first to have this type of issue, we here it all the time.

Try doing it this way:

Here. I just copy and pasted this from a topic I helped someone else in a while back.

Try doing it this way:

Thanks that looks clear enough I’ll give it a go!

Thanks that looks clear enough I’ll give it a go!

After you do it a few times it will be a piece of cake from then on. I did it for my young son about hundreds of times a few years back and now he can do it himself. Hopefully your son can do it himself in the near future. If you need help with anything else don’t hesitate to ask. 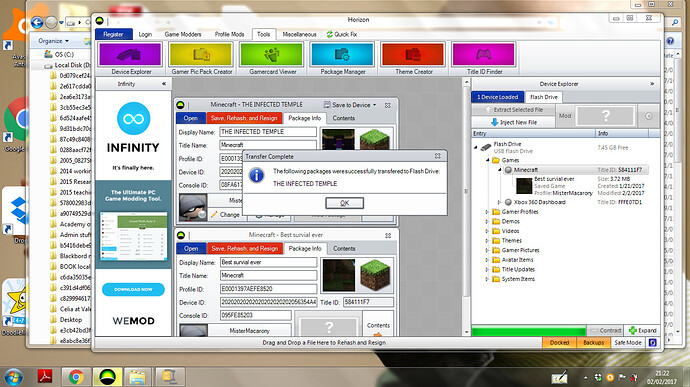 It’s very weird - maybe it’s the map I might try getting another one - there were a few links from people on here that might be more reliable?

Cheers for your help! Nikki

If you post a link to the maps I could check them out.

Also, does the Xbox recognize the flash drive at all?

Edit Obviously the Xbox recognizes it if you were able to move/copy a save to it.

If you try a few more maps and they don’t show up in the list in Horizon or on your Xbox you should format the flash drive on your PC. To FAT32 like it already is. That usually helps with flash drive issues.

Yes I can see the flash drive and move the profile on it and back off it again and move the saved games on and off it and they work fine.

This was the link I used http://www.mediafire.com/file/813113212f2g9ub/The+Infected+Temple+by+Mutant+Marine+Version+2.bin

I’m getting an error when I try saving it to my flash drive. I’ve only seen this error a few times over the years. It’s odd that you’re not getting it as well. Try a different map. Edit I just tried with this map and it worked on my end with no errors.

I just found a link someone posted on here in response to a similar help request (14 minecraft maps that work!) and I’ve only just tried one, Jurassic Park but that works fine!!

So the method is good maybe the map is not - thanks so much for all your help. Hopefully tomorrow morning my son’s faith in my (very limited) computer skills will be restored!

Every once in a while you’ll get a bad file. Now that you’ve successfully done it with one he’s only gonna want more and more!

That link is Stampy’s Lovely World - and it works!!

My son is going to think all his Christmasses have come at once. Can’t thank you enough

have a great evening.