Modded games cant run the trainer/fails to detect the game

I really love the WE MOD because there is a LOT of catalog trainers here.
But recently i discovered a very big problem(for me anyways) i tried to run XCOM2 on its launcher to launch the mods installed, but it wont run then i said to myself “I will just run the normal XCOM2 because i haven’t finished the story yet.”

Fast forward to today I discovered a new problem while playing Fallout New Vegas. I cant play that game without mods and to my surprise the WE MOD application wont recognize the nvse_loader.exe because it only recognizes the main application file (FalloutNV.exe). It has the same problem as the XCOM2 when i was trying to launch it on the Launcher

This way the trainer watches the FalloutNV.exe on the list of processes and doesn’t affect the nvse_loader.exe when it starts because the application will find the processes and not how the game is launched 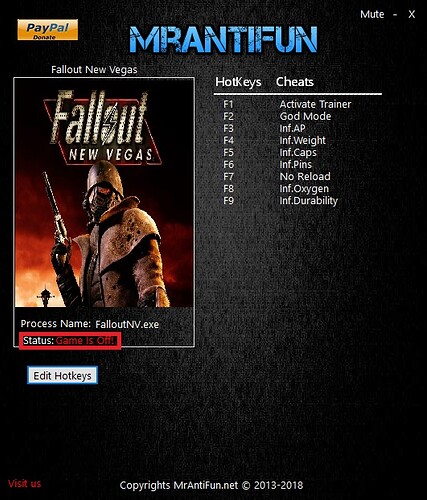 I have read this like 5 times and not sure what your really asking.
You can start the game first then alt tab out then press play in wemod after game has started
Our trainer are made for the legit store bought games we dont support cracked games
I think that’s what your asking ?

Also press the arrow next to the Play button and set a custom path to the .exe you need.

You don’t really need a trainer for most of Bethesda’s Open world games. They have built-in developer consoles that can be used for cheating. https://fallout.fandom.com/wiki/Fallout:_New_Vegas_console_commands

@ptondo thanks that worked, didn’t know that before i can launch the game then click start after wards on the application