Pathfinder: Wrath of the Righteous Cheats and Trainer for Steam

Wish we had a cheat to block exhaustion/need to rest, but that’s wishful thinking. The new update did indeed break the cheats. Update please.

Game crashes every time I try to apply either the health or spells. Tried it several times before and during fiights.

I seem to die frequently from Level Drains. Can you do something for that please?

Guys try Toybox from Vortex, This trainer is pretty ■■■■ for it service and not updating these game quick enough.

i dunno if it is cause i brought season pass but now whenever i turn a cheat on it just crashes the game to desktop?

Hello MAF
Any plans to update the trainer so that the Stats modifier works?

Also, as per below, any plans to include a skills modifier similar to pathfinder kingmaker?

Possible Bug - Adding “-popupwindow” to the Launch Options in Steam crashes the game when opening through WeMod.

idk what else would apply to this game mode…

Today, there’s the 1.3.0k update and the unlimited money option doesn’t work anymore. Unlike this option, the rest is ok.

Besides, I think I’ve met a singular bug. When the game is launched thourgh WeMod, if you sleep at your bed, you could end with a freezing screen before the selection screen, where you choose a task for each character, and you have to end the process. You don’t have this bug when you launch the game with Steam though.

Can you look at this too?

how do I bug report for this game? I’ve been testing it since the patch and the infinite money isn’t working.

About the infinite money option, I’ve found a workaround solution for now with the unlimited items option. All you need is “unlimited items” activated and a simple item, with a minimum quantity of 2 (It doesn’t work with a single item). Here is the solution:

In the end, with less than 5 minutes, you can end up with an absurd amount of daggers (or here heavy crossbows), and selling it is worth few hundred millions. Try it.

Edit: of course, if you have a magical item, it works better. A +1 natural armor necklace for example sells 500 each, and you find it quite easily multiple times. 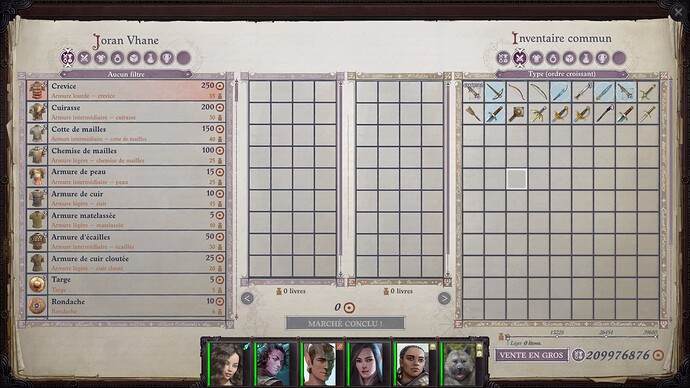 The Multiplication Process works also with the divide option in the inventroy, multiplying much faster.

with this next update can you add troop modifications, such as modifying the number, and how far they can move each turn