Prototype Cheats and Trainer for Steam

This is the official discussion topic of the Prototype Trainer and Cheats in the WeMod app. Please post any suggestions, bug reports, or praise that you may have for the cheats in here! 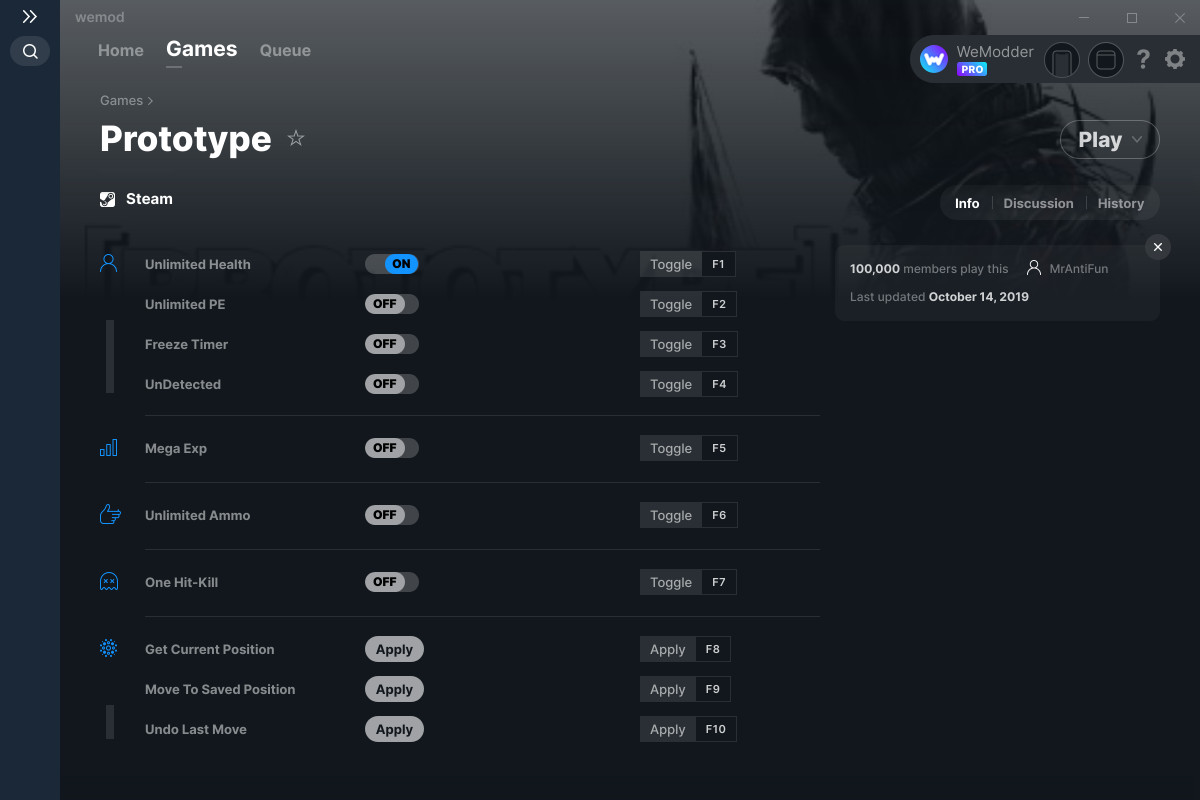 The Prototype cheats have been updated!

I don’t know the purpose of this trainer. Let me explain.

In Prototype, you play Alex Mercer. After some silliness at work, you are effectively a walking god that eats people, and monsters. Sure, there are some difficult parts to it, but that’s half the fun of the game. Also, while playing this game one day, there’s a section where I had to drive a tank to a hospital… I fell asleep while driving the tank. I was later told that while I was asleep, I had driven the tank in a perfectly straight line to where I was headed.

Don’t get me wrong here, I love the fact that you released a trainer, and I’ll be installing the game to use it, just to see how much more godly Alex can actually be. But since he’s already a god…

Remember, I’m not complaining about the trainer, or it’s release. I’m just wondering what caused it’s release in the first place =)

Generally speaking, trainers are developed by request of the community. People wanted it, so we made it so

I don’t know what happened to the trainer
but some cheats are’nt working like unlimited pe, unlimited health,etc.

please check it and fix it.
thanks

Make sure you are using a legitimately purchased copy of the game from Steam and that it is up to date (as opposed to, for example, the CD-Rom version of the game). Cracked games often have incompatibilities with third party software such as trainers.

The game has not received an update for years, there’s no real reason for the trainer to stop working all of the sudden.

I own a valid copy and I’m facing issues with the unlimited pe cheat. It shows 999999 EP under the health bar whenever I gain any but in the upgrades tab, the actual amount is the normal value. Not sure if there are any specification to the activation or what.

Like I said in my comment, I have a legitimate copy and the unlimited PE cheat isn’t working.

It shows 999999 EP under the health bar whenever I gain any but in the upgrades tab, the actual amount is the normal value.

i’m having problems with the trainer the unlimited pe

Same here, Steam version of the game, auto updates enabled, game up to date, but “Unlimited PE” doesn’t change the actual value, just the value in the HUD. Also “Mega EXP” will crash the game when earning “EXP” (actually EP, not PE, or EXP).

ig we’ll just have to get it normally