This is the official discussion topic of the Test Drive Unlimited 2 Trainer and Cheats in the WeMod app. Please post any suggestions, bug reports, or praise that you may have for the cheats in here! 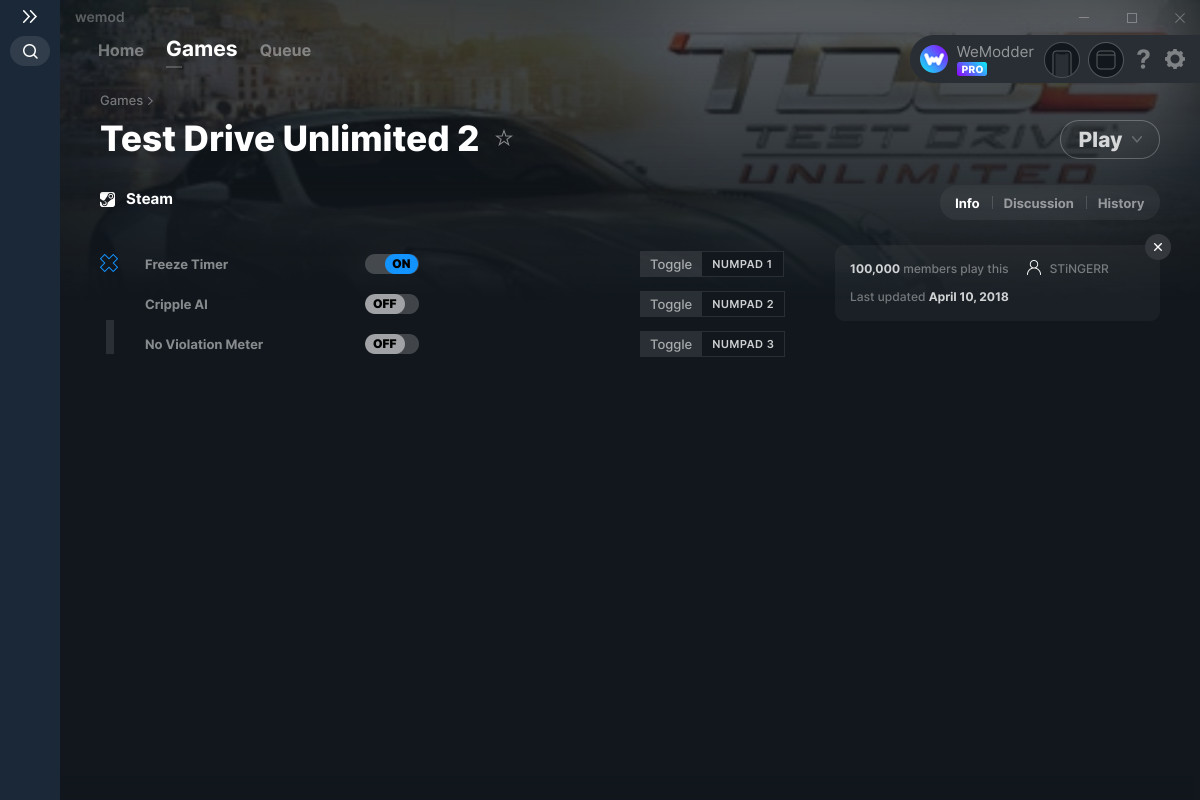 too bad i dont own this anymore.

Having an issue with the trainer. At the end of a race, the game just gets stuck; there’s no cut scene, can’t go to map, etc. and you’re just stuck at the finish line. I’ve tried deactivating the active cheats part way through the race, but still end up with the same result.

Thanks for the new trainer for TDU2. At this stage I have only tested the Freeze Timer, and am supplying feedback for you.

There are at least two types of timers used by TDU2: countdown (usually in the DLC) and count-up.

The countdown one seems to work OK, though I have had some game freeze problems occasionally. Please note that after you finish the race, turn OFF the Freeze Timer, so that the game continues. Sometimes even doing that does not unfreeze the game. I would also recommend having some time “on the clock” before turning ON Freeze Timer. ie turn on a late after the race starts.

I hope this helps.

Thanks for the trainer but crippling AI doesnt work for me because when i use it i cant move either!

@C_Maggotbone i do not either, tried playing tdu2 a few times and would give me issues on launch.

I came across the same issues except no matter how I used the Freeze Timer with count down timers, I would always end up frozen in place at the end of a race.

I even found this issue with the Cripple AI; I would finish a race and wait for the opponent to cross the line. Even after he passed me at the finish, I would still be stuck at the finish line, just like with the Freeze Timer option.

UPDATE: I kept toying around with it and found that the game won’t “freeze” on countdown timers if you start them with about 15 seconds left on the clock (and don’t turn off option until about 2-3 seconds past the finish line). So good news is that essentially works.

Bad news… I found the Cripple AI option will only work about once before it causes an issue with the game. I found with the second consecutive use of the Cripple AI option, the game would stop rendering the world and both player and AI drivers would simply drop through the map. Turning off the option does not help with this and so far the only resolve has been to restart the game each time.

The only things Freeze Time can be used on: Is for the license tests only. Cripple AI only works on races. No violation meter only works for the police in game. Not during races. And Yes, I have recorded my play through’s with it on. I REALLY want Freeze Time to actually work on those timed challenge races for the championships per class. as I can’t stand them. I’m glad someone else is having this same problem that I’m having so the trainer maker can’t say “It’s just you having this problem.” I really don’t want to have to spend six or seven bucks to get the same trainer from Cheat Happens’s website as even though this game is seriously old. Their trainers work and if the trainer maker known as FLING made one for this version, I’d be HAPPY as the individual’s trainers WORK.

theres a few cheats that id like to see get added, like maybe Freeze traffic, xp mod of some sort/money mod (offline ofc) and a speed hack

I’d love to see more cheats as well, and also for the “freeze timer” option to be fixed for normal races.

im happy that this game now has a trainer but where is the infinite money, level up and unlock all locations option?

cant get it to work on steam version

9 months later and only 10 comments I dont think that will happen any time soon.
Maybe if more people vote or played the game

that is true but we can still hope

Hi, I know this game is old and all, but it just got a brand new custom server mod that is available on turboduck’s website. Just FYI… And is anyone having trouble with this trainer, I’m getting an error that states " This were made for the 32-bit version…"?

Same here. Sucks that I only have a 64 bit PC (Suffering from success)

Having a 64-bit PC has nothing to do with it.

This “server mod” sounds like an online thing. If that’s the case then that’s your issue there - trainers are not intended for online use.