Anyone know how to fix or have the issue of being put beneath the map unable to open your map 50% of the time when using the teleport to waypoint cheat? 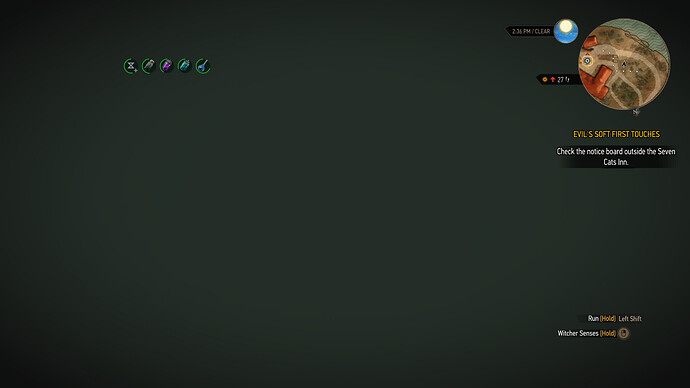 Teleport on GOG does not work it seems and exp neither

The The Witcher 3: Wild Hunt - GOTY Edition cheats have been updated!

Just asking if anyone knows, but how do you use the code add exp ? I cannot figure out this one and have been trying to make it work…

To solve this : just manually save when you have the oriblem, then re-load the save. The 99999 weight will disappear. Allowing you to run again. Avoid triggering it by looking at the crafting tools.

Meanwhile were you able to make the add experience code work !? If yes, how did you do it ?

Hey MrAntiFun, did you notice that the game crashes after using a cheat and turning off wemod? Can you fix it?

i play with gog

Does anyone else have issues with DX12? I have to launch the exe as DX11 in GOG in order for the cheats in the WeMod UI to work. If I stay on DX12, the app will successfully “connect” after I hit Play. However, actually hitting F1, F2,etc. after connecting results in a fake-out enable, where the toggle switches to “on” for half a second, and then quickly disables itself with the sound effect. I did find “unlimited durability” didn’t revert after enabling; however, after about 30 seconds the game crashed haha.

Again, these are non-issues when launching the exe as DX11 (fyi for those unsure how to do this and running into the issue - next to “Play” in the GOG UI is a filter/settings-looking icon - hit that, and the first option should be “Additional executables” - select DX11). But I would love to play from DX12 given all the updates/enhancements, so any guidance would be appreciated! Thanks for your hard work with this!

In GOG the game is now called “Complete Edition” maybe this is a prblem ? i cant activate most of all cheats, when i try to activate the cheat 1-5 it turns on for a short time (second) and then turns off with a “negative sound” halp pls

Most of the cheats fails to work for me as well. GoTY - GOG. Now called Complete Edition.

a few of the cheats (like adding exp or points) can only work if you play on DX12.

Playing on DX11, some cheats won’t work, but you’ll get a much better stability and less crash. I guess we might need to wait more stable update from cd projekt to correct.

Same here, I use a Offline Installation of GoG Witcher 3 Wild Hunt v.1.32 with Hearts of Stone + Blood and Wine. I can start WeMod The Witcher 3 Wild Hunt Trainer for Gog Version without problems. But when I start the Game Cheats Nr. 1-5 and Nr. 17-19 goes OFF immediately! Its not possible to switch on these cheats when the game is running.

For me they all work. I start Witcher 3 before starting it in WeMod, but I have a weird problem. When activating F1, Unlimited Health, everything is a one shot. It doesn’t matter if by sword, sign or anything else.