Wasteland 3 Cheats and Trainer for Xbox

This is the official discussion topic of the Wasteland 3 Trainer and Cheats in the WeMod app. Please post any suggestions, bug reports, or praise that you may have for the cheats in here! 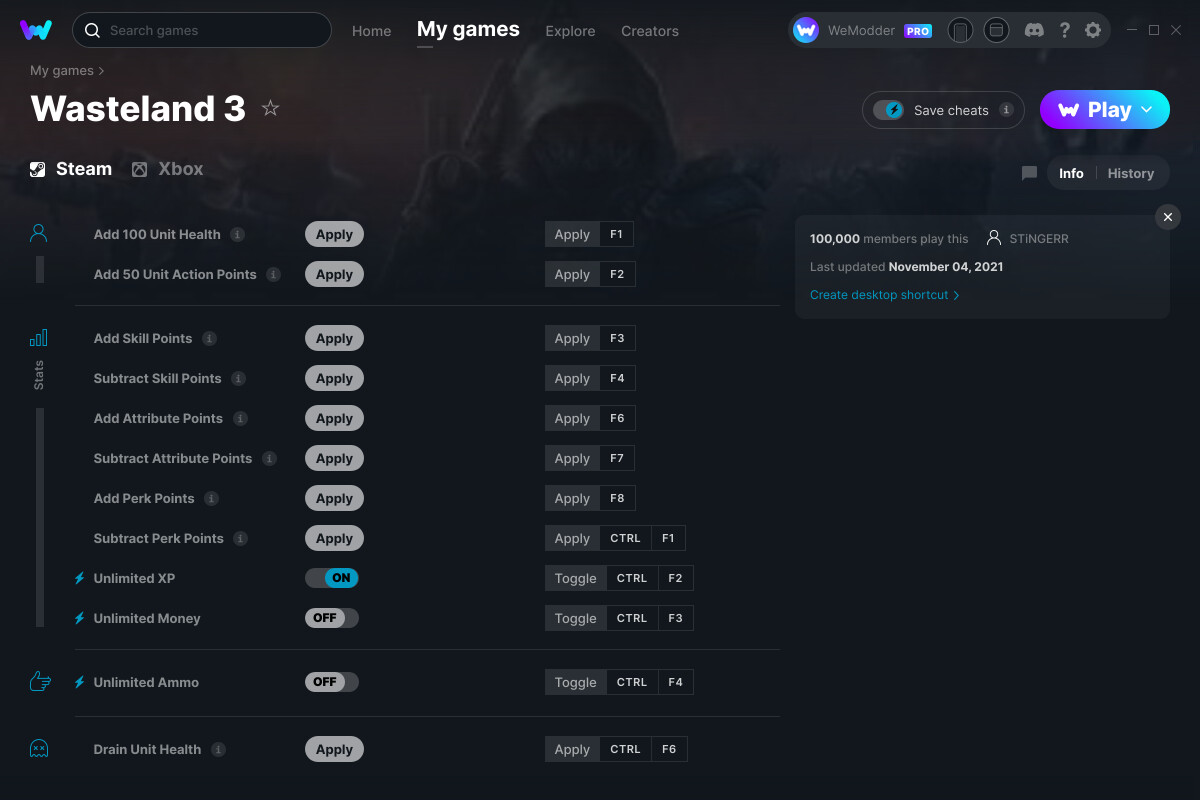 Hopefully you can fix the 999 unlimtied so that it works better with the game. One press 1 point would work much better.

I am having a problem with some of the mods. The skill points, Attribute Points and Perk Points ain’t working… please fix it.

The trainer only adds the Perk points to the 6th character and the Skill and Attribute points to the character in the 5th slot. When trying to subtract Perk points, it actually subtracted from the 3rd slot so now it’s negative and wouldn’t add points. Everything else works so far.

I have the game through gamepass with windows and when i open up wemod it tells me this is an incompatible trainer… idk if its cause the game just released that they updated it and it already doesnt work? or maybe because i have the specific version? but i have used this on other games i have via gamepass and it works fine?

EDIT: if you reassign the keys to something the game doesnt use and you hover over the character for ALL the cheats, it works fine even though it says incompatible.

Unlimited Ammo doesn’t work properly. It activates, but you still lose ammo and have to reload.

yea the ammo doesnt work, everything else is fine, if your having issues with the skill and attribute points you have to change the select character to something else or turn them off, thats what i did, since it uses the numpad to switch characters and remember to hover over the character not click on them, only click on a character when done adding or subtracting points

Been having problems with the unlimited xp in the windows store version. Have it activated the whole time when I’m earning xp and have tried several variations of activating it and deactivating to try and get results. The version I have downloaded I will add is from the pc game pass.

Will also add that anything that should be adding to a character like xp, skill, attributes, and whatever the other one is are not working but everything else is fine.

I have been having similar problems to Razoron. I too am using the windows store version. Wemod is saying its out of date and use at my own risk. I really love this trainer and I am hoping there is an update soon! Thanks to the devs for their hard work on the trainer.

I’m using windows edition of the game and the cheats aren’t working. hope you can get to an update soon

None of them work with the current windows store version. Hoping for an update soon. Thank you for doing this!

So made a comment about 2 months ago and haven’t seen any form of update since October. Are you planning on still supporting this?

It would be great if it’s still supported - also a God-Mode / Invulnerability would be nice. It is possible, because the Fling-Trainer got it on board.

Thanks for the info everybody! It should be added to the list soon.