Borderlands Game of the Year Enhanced Cheats and Trainer for Steam

This is the official discussion topic of the Borderlands Game of the Year Enhanced Trainer and Cheats in the WeMod app. Please post any suggestions, bug reports, or praise that you may have for the cheats in here! 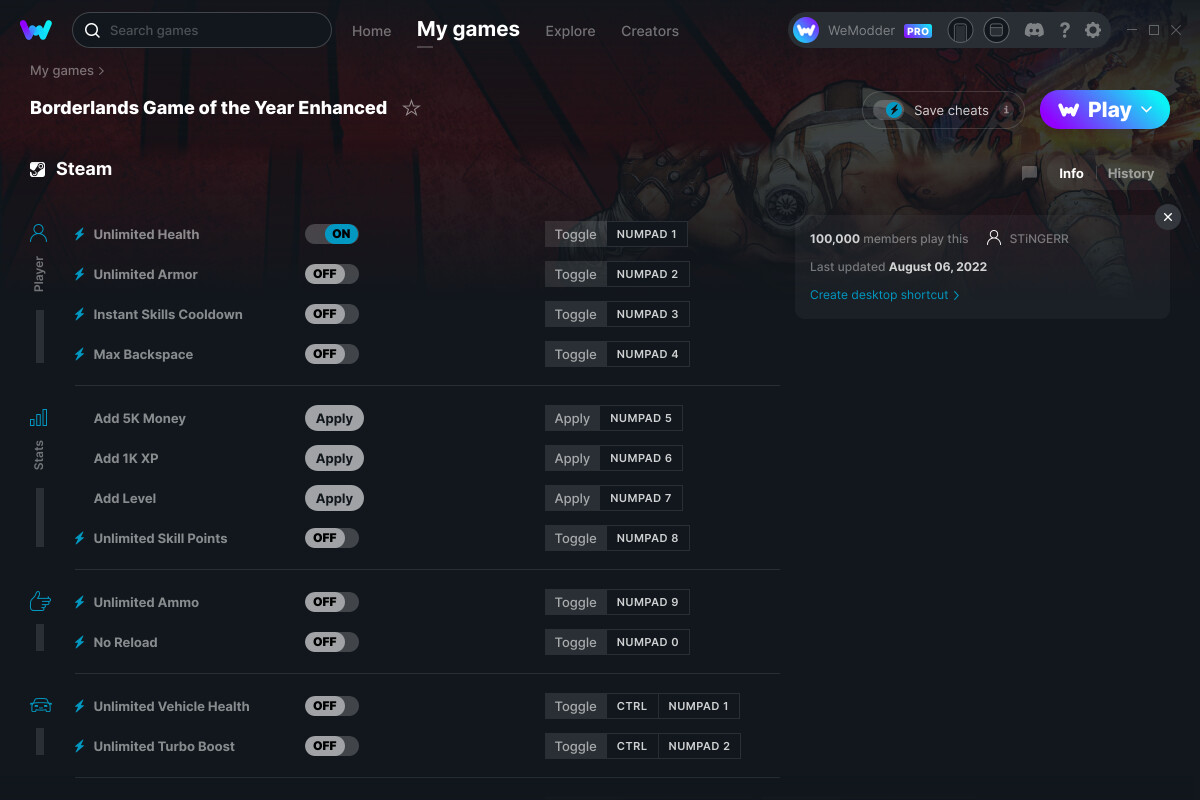 Awesome!! hoping for add xx golden keys like in BL2

This will be great.

The Borderlands Game of the Year Enhanced cheats have been updated!

Damm. @STiNGERR your the best. I dont care what they say about you ! Hahaha
Thanks for the hard work. Hopping on now!!

Tried to use the trainer, but when I try to load them up it says that I am running a 32bit version and the cheats are made using 64bit. Thought the enhanced version was only 64bit to even play. If you could let me know what I am doing wrong or how to fix I’d greatly appreciate it.

Thanks for making this already. is there any plans to add an cheat for golden keys now that they are in this version?

I know on mine when I tried it it popped up and said your running 32 bit version this is for 64 bit version , and I’m not , so I started the game first then clicked play in wemod again and worked perfect

the trainer is working very well. I have only a question about the option to add money. I use the option but money didn’t change, did i have to do something? like selling or buying objects?

For people who have the 32/64 bit error, add a custom installation trough
G:\games\steamapps\common\BorderlandsGOTYEnhanced\Binaries\Win64
(ofc, C:, G: or whereever you have the game installed) and in that Win64 folder, pick the “BorderlandsGOTY.exe”

That being said, is there a way to reset my skillpoints? i accidently used the unlimited skillpoints hack and now i got 99 skillpoints but i dont want them.

I seem to have run into a minor issue. It would appear that I can’t seem to damage (at all) Krom or his cannon with the unlimited health and unlimited armor cheats on. But that’s not the issue. You’d think “hey, I can just turn this off, and it’ll work”. Sadly, that is not the case. In fact, the case might even get worse than that. I reloaded the save, didn’t use those two cheats, and he’s still unable to take damage from anything I throw at him. Volcano, Hellfire, Pestilent Defiler, plain ol’ rapid fire bullets with good aim… Nothing seems to be working.

I’ve quit the game and restarted it without cheats, and he still can’t die… This would suggest the cheats got saved, and he’s got 'em instead lol. Unfortunately, the save is most likely corrupted. For me, that’s not a problem. For other people, that could be disastrous.

MAJOR EDIT: @STiNGERR, you did a hell of a job on this trainer, and I thank you for it (from an old Borderlands modder) Like others, I’ll sit here and hope for a “golden key” bit to be added.

MAJOR EDIT #2: I’ve figured out what it was that was causing Krom not to take damage from me. It wasn’t the unlimited health as I first thought. Instead, it was the Vehicle Unlimited health that he got. Found this part out by deciding I didn’t need a super healthy car if it was super fast, so I disabled the cheat, and boom, Krom is dead (again).

Continuing the discussion from Borderlands Game of the Year Enhanced Cheats and Trainer for Steam:

Could it be possible to get a “easy kill” option for Borderlands goty enhanced? <3

i had all cheats on and i killed him no problem.

Do you have to uninstall it first?

Try to start the game first then back out with game running and push play in wemod after ?
And no you dont have to uninstall it. Find where you downloaded the game to

was wondering if there will be a easy kills cheat, would make craw so much easier! Everything is great though!