Does anyone here have an issue where the ground glitches and turns black except of lighted torches?
It only has happened after the last game update. I am not sure what cheat does this. I have checked
video card drivers and the game install files integrity through steam.

yup, i used my 15 boosts for core keeper lol i was hoping theyd fix this bug. its the cheats they bug the game im assuming,

I experienced the black world glitch as well. I use Easy Digging, Reveal Larger Area, and Unlimited Weapon/Armor Durability.

Easy Digging doesn’t seem to be working since the latest update but it may not be that one since I had it off and just experienced it.

Reveal Larger Area may not be the issue either.

Noticed Armor Durability looks wonky in terms of value. Trying it w/that off now so I just have Weapon Durability on now.

Will report on the others as I find out.

it might be the issue, before the update the mods that didnt wanna work were the durabilitys

note:
i create a new world each time it blackens

I also ran core keeper on two different computers. I thought the glitch might be a nvidia issue. My laptop is a ryzen apu. The dark glitch is there as well.

Also the new update has a different backend from the original not sure if that makes a graphic difference.

Can you make sure that you have the newest trainer selected? You can check this in the History tab under play. 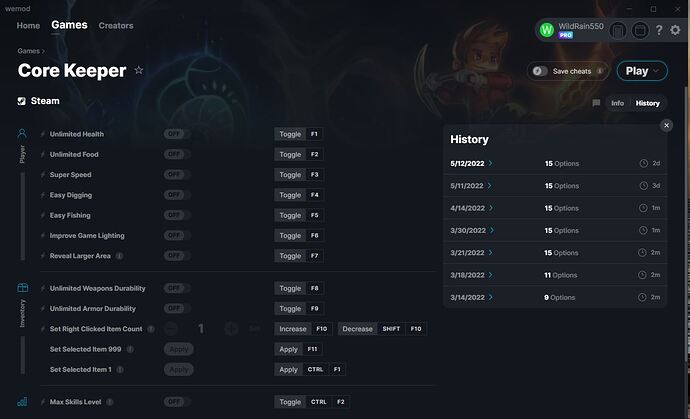 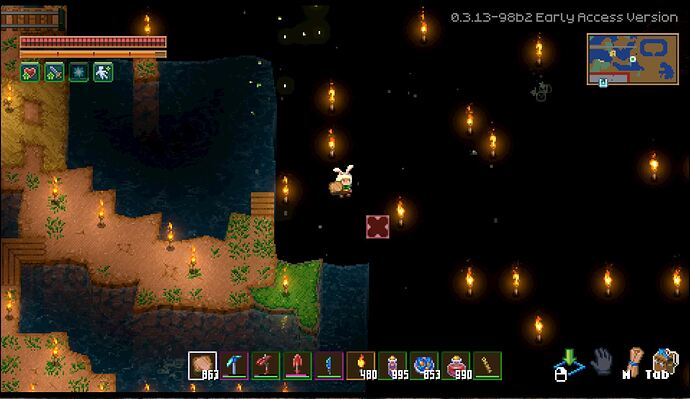 When was this taken? The older trainer version was the default until last night when I made that post.

These pictures were taken 10 to 15 min before I posted them. Also I did a fresh install of the game. I even went as far as deleting my cloud saves on steam to see if it was a corrupted game save. All with the same results. The only thing I haven’t done is reinstalled wemod. I was going to do that next to see if that changes results.

Not sure what changed but I played a solid couple of hours with no problems. I did reinstall wemod not sure if that made the difference.

Anyone else run into an issue where the system no longer register interactions? e.g. Like breaking a wall, and the wall just reanimates back up. Closing the system and starting back again fixes it for a short timebut then it happens again.