This is the official discussion topic of the Deep Rock Galactic Trainer and Cheats in the WeMod app. Please post any suggestions, bug reports, or praise that you may have for the cheats in here! 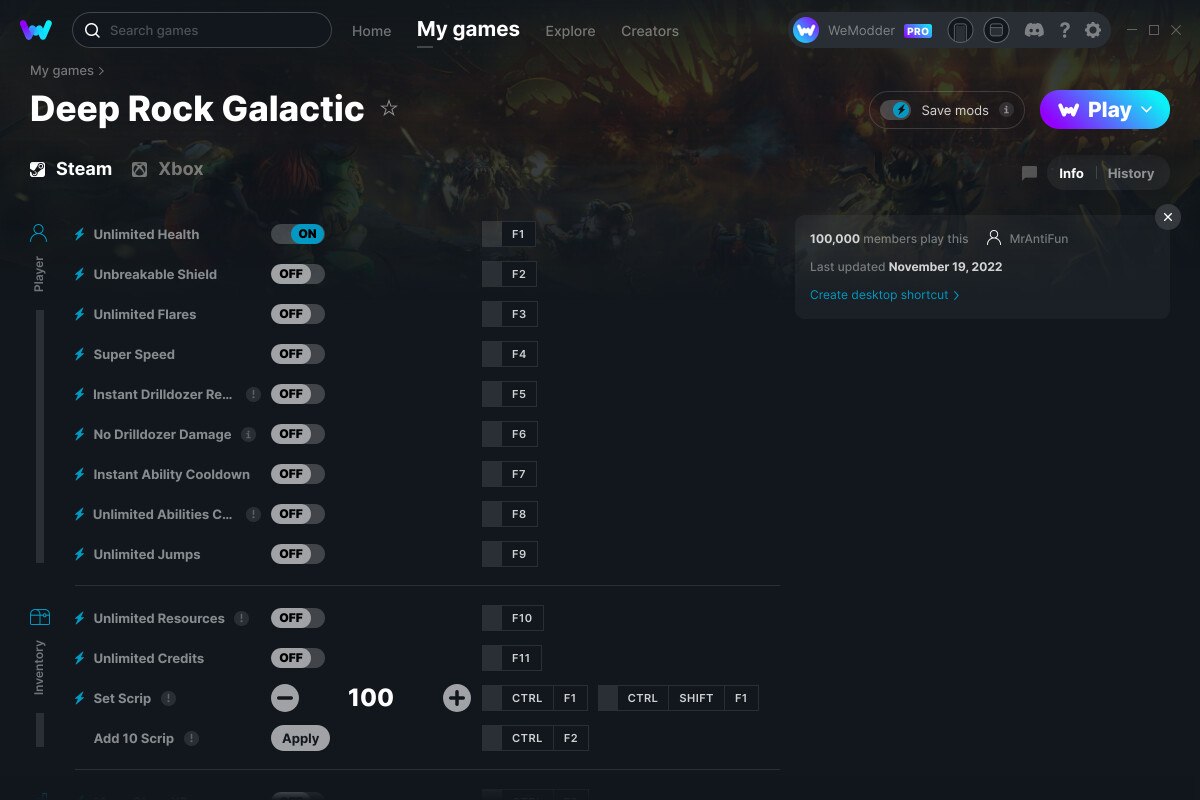 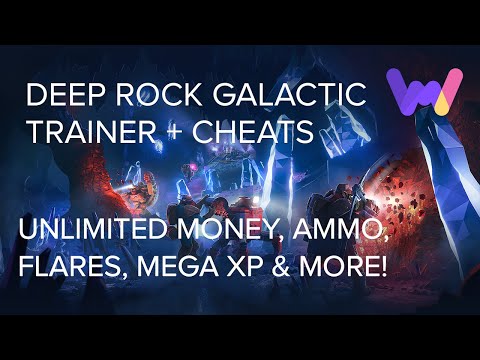 The Deep Rock Galactic cheats have been updated!

All Cheats worked fine (Unlimited Ammo did not work for all “weapons”) but now there’s update 24 in Deep Rock Galactic and some Cheats dont work anymore (Unlimeted Health, Unlimeted Shield, No Overheat still work / One-Hit Kills work but the Monsters(Aliens) also can kill the players one-hit even with Unlimeted Health/Shield / not sure about Unlimeted Money)
hope we get an Update for Cheats soon

The Deep Rock Galactic cheats have been updated!

Thanks for the work on the trainer, however i’m not able to get the unlimited money to work even after purchasing something in the accessory shop.

Everything turns off immediately after activating anything.

Probably antivirus. If none of the cheats work
You do have the game from steam ?

Unless Windows Defender is blocking it?
I have the game on steam, should I be offline to activate cheats?

Yes. The trainer is made for singleplayer offline only

I actually used it with friends in a private lobby and moat of it worked for me. It somehow started working for me and ai don’t know why it just decided to.

Well they are not made to work for MP but if they do then ok.
If they dont work we wont update or fix the trainer for it
Hope you dont get banned for using in MP

Nothing works. I ran it offline solo, and even with my internet disconnected. Can I get a step-by-step?

All of the following were tested in single player with an internet connection, not multiplayer.

Not working at all:
Unl money
Unl flares (quite a shame; I run out of light on a regular basis)

Partially working:
Unl health (doesn’t protect from fall damage. Also doesn’t fully protect damage. Damage is still taken, but it’s what your HP is set to. E.G. if your character has 100 HP and you take 5 HP of damage, your HP will be set to 95. If you take 3 HP of damage, it will then be set to 97, and so on. It’s good enough to keep the player alive in most situations, aside from falling to one’s death. Haven’t tested if receiving a lethal amount of fall damage from full HP results in death or not.)
Unl shield (doesn’t protect from fall damage. Other than that it works like a charm, always maxed out.)
Unl ammo (doesn’t apply to the separate ammo pouch used by the engineer’s sentry guns, and unfortunately doesn’t give the driller unlimited fuel for his drills. Also, doesn’t always work with sidearms. E.G. your sidearm has 20 ammo, you fire 20 shots, and even though ammo is displayed as still being available, you can’t fire anymore. Fortunately, you can just switch weapons, then back to your sidearm and it’ll be fully reloaded.)
One-hit kills (even applies to the engineer’s sentry guns, BOSCO, and the platform turrets in aquarq/point extraction missions - pretty impressive. Doesn’t work on loot bugs, golden loot bugs, qronar shellbacks when they’re rolling, or juggernauts’ armor, but does work on juggernauts once you’ve taken out their armor.)
No overheating (Doesn’t work with the driller’s cryo cannon, untested with his flamethrower, untested when it comes to both of the gunner’s primary weapons, does work with the driller’s drills.)
Unl gadgets (Doesn’t seem to work for the gunner’s shield generator, seems to work for everything else.)
No reload (The recharge timer for the scout’s grappling hook stills exists with this enabled, but this works with everything else.)

Suggestion: please add ore & objective ESP (including bittergem and error cubes, please). Sometimes missions take over half an hour, and even over 45 minutes just because of 1 illusive secondary objective, especially when it comes to fossils since they don’t glow in the dark like most other objectives.

Small error in the description: it’s said that there are “more than 10” cheats available in this trainer, but there are actually exactly 10, not more than 10.

Thanks for your detailed report! I’ve made this trainer available to vote on in the WeMod app!

No problem! I’m pretty new to the WM app. How do I vote on this trainer? I haven’t been able to find a voting option for it so far, unless the “REQUEST UPDATE” button is the voting feature.

Yes it is request update button

None of the cheats are working today. and the new update request system is total overrated, need too many votes for not so popular games. one of the reasons im not PRO any more. nothing is gived to those who payed for the service.

I see the game had an update which most likely broke the trainer. I appreciate the time you spent with us as a pro member, there is a new voting system in the works and a lot of changes behind the scenes taking place.

sounds super good. you guys ar doing an awesome job, no doubt there. Super thanx for an answer, not always people do that. It shows me there are dedicated people in this community. +rep for that