This is the official discussion topic of the Dungeon Defenders: Awakened Trainer and Cheats in the WeMod app. Please post any suggestions, bug reports, or praise that you may have for the cheats in here! 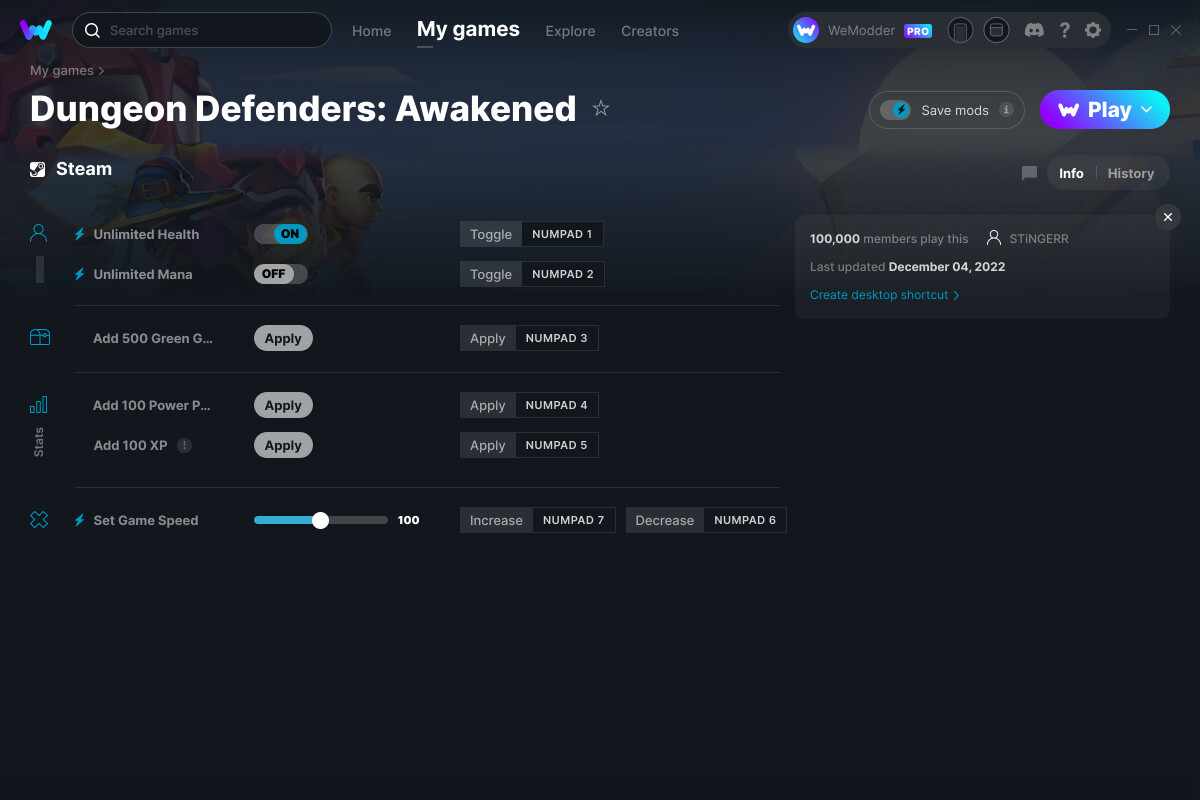 The Dungeon Defenders: Awakened cheats have been updated!

As long as you do not attempt to use the trainer in online game modes, you should be fine.
WeMod does not provide hacks for online games. It provides trainers for single player games. There are huge differences between trainers and hacks. WeMod also does not condone cheating online and ruining the experience for other players.

Trainers from anywhere on the internet are only designed to be used in single-player, offline games. On the extremely rare occasion that a trainer might be injected in online game modes, purely due to oversights by the game developers, then the chances are you’ll be flagged by an anti-cheat detection bot to be banned in the next banwave.

there is no offline mode just the play button

I’ve been waiting a WHILE for this trainer and I gotta say… it’s kinda underwhelming.

Also, no idea what “add 100 power points” does. I mean like, nothing happens.

And lastly, “add 100 xp” must be some kinda joke because late game levels will be scoring you 100M+ xp per match, 100 xp is like giving yourself a fraction of a penny at a time while trying to save up for a nice house.

In the end though I’m still glad y’all made a trainer for it, better something than nothing at all!

I tried to activate the cheats in coop (not host) and it didn’t work, and been playing a few coop with Wemod running and I’m not banned.
I might or might not be marked, there’s no way to tell. But I get kicked 50% of the times when joining others (got kicked even when Wemod wasn’t even running).

Also before anyone asks; Yes the 500 green gems cheat works, but to get as much as you want you have to activate the cheat as many times as you want then pick up a dropped mana gem from a killed enemy to see the result. Don’t want to sound like a captain obvious, but i just wanted to throw it out there for those that are confused about how that works.

Enjoy your ban, then.

Chances are you’ve either:

Reminder: WeMod does not condone cheating in online game modes nor does it build any tools for the purpose of doing so, as it ruins the experience in the game for other players, which is a very low thing to do.
In the very rare case that any trainer from anywhere on the internet happens to work in an online game mode, purely due to oversights by the game’s developer, then the game will probably dish out bans to players caught using them.
Never use trainers online, no matter where you got that trainer from - Even if it’s just to “test” whether it works or not.

Be patient. making these and fixing these take time. Trainer devs like Mrantifun and stingerr also work on other trainers too. Give it some time.

Forgot to put extra feedback in regards to the exp cheat. yea 100 is too low considering that you need over 1 billion exp to reach level 100. If possible would like to see that changed to 100k exp given. Also would like to see towers/crystal core have an unlimited health cheat, if that part can’t be done then no worries, would mostly just want to see the exp cheat fixed and the value be a bit higher.

I’ve been wondering the same thing