This is the official discussion topic of the Five Nights at Freddy's: Security Breach Trainer and Cheats in the WeMod app. Please post any suggestions, bug reports, or praise that you may have for the cheats in here! 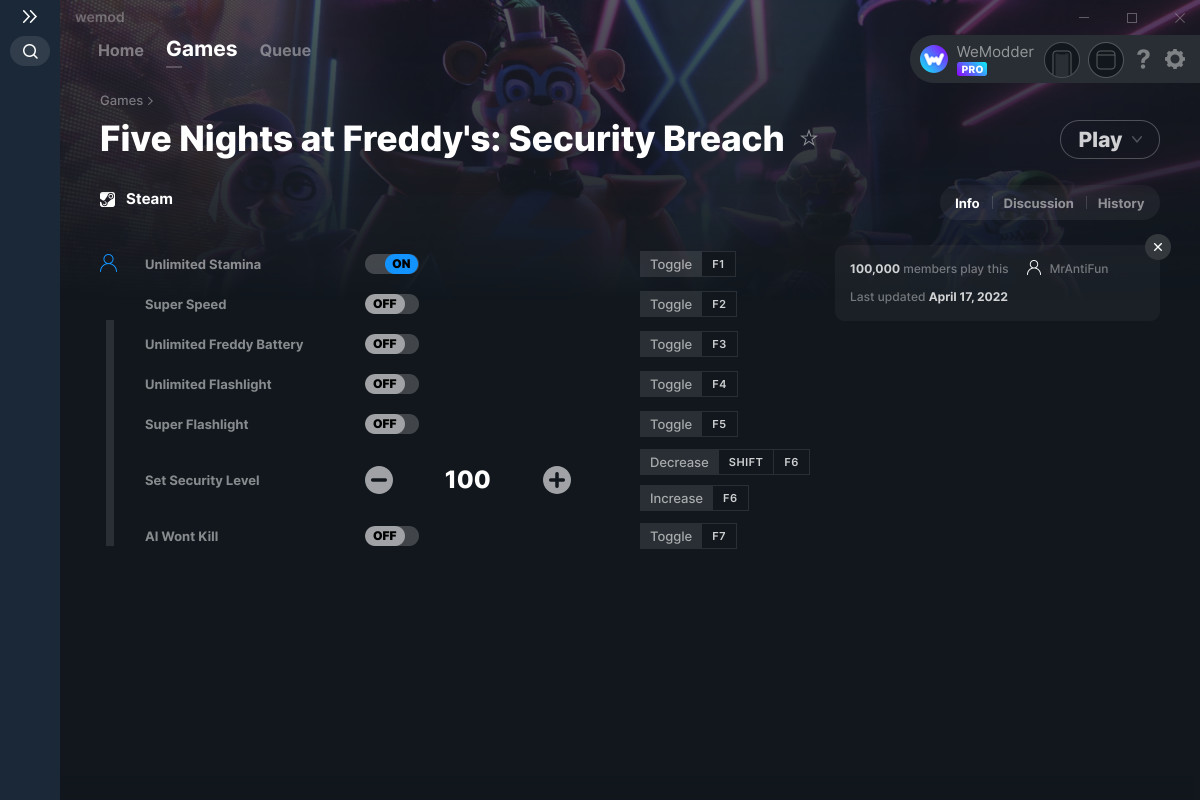 The Five Nights at Freddy’s: Security Breach cheats have been updated!

yeah only the battery works unlimited stamina just turns off

My trainer keeps making my game crash while I’m playing the game.

only the infinite sprint and no AI attacks work. everything else doesn’t

AI attack crashes my game most of the time

doesnt for me, nothing lags just most of the cheats dont work

like if i have ‘ai wont kill’ turned off and get a jumpscare it will crash the game, but i need it off where i am in the game or else i cant continue

does your unlimited freddy power work?

I downloaded the New Fnaf Security Breach Trainer and overall, I really enjoy it. The thing is that every so often when I play the game with the trainer my game suddenly crashes, I’m not sure if it’s my computer in general or if it’s the trainer just being new, and it’s not fully updated.

yeah mine does, it seems to force it to be like 4-5 bars instead of 6 all the time but it doesnt go lower. same with the stamina and flashlight battery, they are forced to be like 70% instrad of 100% but they work for me.

man, if only there was a way to use these when using ps remote play.

i’m stuck in an area where the robots are scp-173.

Only unlimited freddy battery work on my game.

i found running through that area to be most effective or getting them in a bunch at the end of a hallway and then running to the next part. if you hide and watch the cameras you also get some good times to jump out and press the buttons.

Trainers good, but maybe try to make it happen for the Moon guy when the lights go down for
Sun but when the Missions over, Moon will stay there so make it so Moon Doesn’t
Attack the player if the player is in Freddy or outside Freddy! Thanks!
Edit: The game crashes whenever a Jumpscare from Map bot happends or if I deactivated a cheat
in-game, sometimes it will crash. Please fix it!

Trainer works fine, I was at the part where you need to make a pizza for Chica, but when I turn on any cheat it just crashes my game. I don’t know if is it because my pc or just the game/trainer.

Same - I had the cheats turned on and when it put me into the pizza bot it crashed so I had to complete that part without any cheats on.