Halo 3: The Master Chief Collection Cheats and Trainer for Steam

This is the official discussion topic of the Halo 3: The Master Chief Collection Trainer and Cheats in the WeMod app. Please post any suggestions, bug reports, or praise that you may have for the cheats in here! 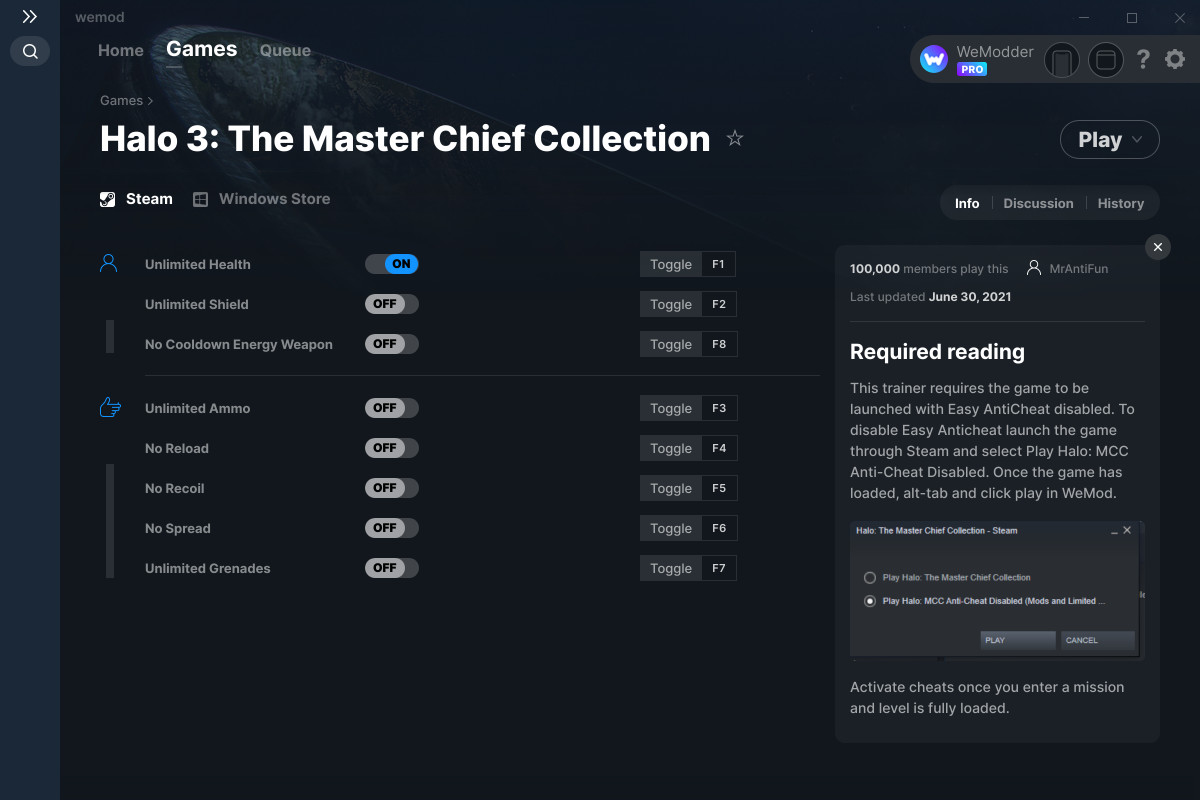 The Halo: The Master Chief Collection cheats have been updated!

Everything works except Unlimited Health. You have to have Unlimited shields on to be invincible.But thats is always liked your trainers and waited patiently for updates thank you.

Hey @Shlog04. Thanks for being Pro.

Before this gets passed on, could you double-check that you are following the instructions in the trainer, please? 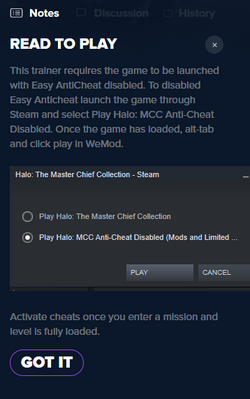 1 - Launch the game via Steam.
2 - Select “Play Halo: MCC Anti-Cheat Disabled”.
3 - Alt+Tab to WeMod. Press Play. Alt+Tab back to the game.
4 - Start a mission. Wait until the level is loaded. (Give it an extra minute, just in case).
5 - Activate the desired cheats.

Hey MrAntiFun, thanks for another great trainer.

Is there any likelihood you will add a one hit kill cheat like there was for Reach?

but besides that its really good!

Welcome to the community @mrnoobpro.

Trainers do not touch the game nor the game files in any way. They just inject values into your PC’s RAM. So a trainer can not modify how the game looks on your screen.

Take a look at your ingame settings and tweak some things. Maybe some effects can be lowered or turned off entirely.

Good night, greetings,
I have a question, how do I release the achievements using this mod? because in other games it works normally?

When using this mod under the “disabled anti-cheat” achievements are locked. So to bypass that, and with Halo 3 being recently new, you have to save at any checkpoint normally when playing in the anti-cheat enabled, when you get to that checkpoint, save and exit. Then disable anti-cheat, active mod play through until you get to a checkpoint towards the end of the mission, save and exit. Resume play through with anti-cheat enabled, then it should work. But sometimes Halo MCC can be a bit finicky. Usually should work, some things may not.

I see, thanks for explain!

Cheats work great and run smoothly! Only thing I could ask for is maybe invincible vehicles so we don’t end up dying when they blow up.

Thanks, but I think you meant to respond to @mrnoobpro

My question was unrelated to visual effects.

Thank you for pointing that out, I’ve corrected the mention. I believe I was attempting to answer both queries in the same post, but one answer seems to have slipped away. Damn my - oh, look, a squirrel - attention span.

Anyway, thank you for your suggestion in this post: Halo: The Master Chief Collection (Halo 3) Cheats and Trainer for Steam. The trainer is still very new so there’s a chance more cheats could be added in a future update to the trainer if MrAntiFun is able to add certain ones.

ok sorry, but thanks for the welcome!

For the previous installments we were able to just start with EAC off, mod play until the end/a late checkpoint and then start play normally - sometimes the mod would stay turned on (ie the injected shield status) but it was still considered normal gameplay. Would this still work, or does H3 really require the extra step or starting a mission and getting a checkpoint normally before quitting and using mods?

When I was doing achievements just for the legendary run, I would start with EAC off, play until say 2nd or 3rd checkpoints, save and quite. Go back in with EAC on and when I would finish it, it would not register any of the achievements. Same goes for the playlist as well. Some things are still bugged and not registering properly with the server so it assumes you’re still in EAC mode.

You are correct, previous installments never had that issue when starting in EAC off then going back into EAC on when trying to gather the achievements.

Unless its just me, I found that starting with EAC on first, go to a checkpoint, save and exit. Go with EAC off go as far as I can, then back to EAC on and I would get the achievement. It was bugging very hard for me and that was the only way for me to get the achievements to register.

I’ve tried multiple times like previous times, but it would be wonky, sometimes work, sometimes it wouldn’t, but especially when striving for the difficulty achievements and finishing levels, I just never got the pop up. So this was the only work around I found for me, could be different for others.

tested today, all cheat worked
may be can you make a : one hit to kill
thanks

can you use wemod cheats on halo 3, with easy anti cheat disabled and play the campaign in co-op? or does anyone know how to do it? anytime i do it with my friend, the game will quit and pop back to main menu or the campaign lobby