This is the official discussion topic of the LIGHTNING RETURNS: FINAL FANTASY XIII Trainer and Cheats in the WeMod app. Please post any suggestions, bug reports, or praise that you may have for the cheats in here! 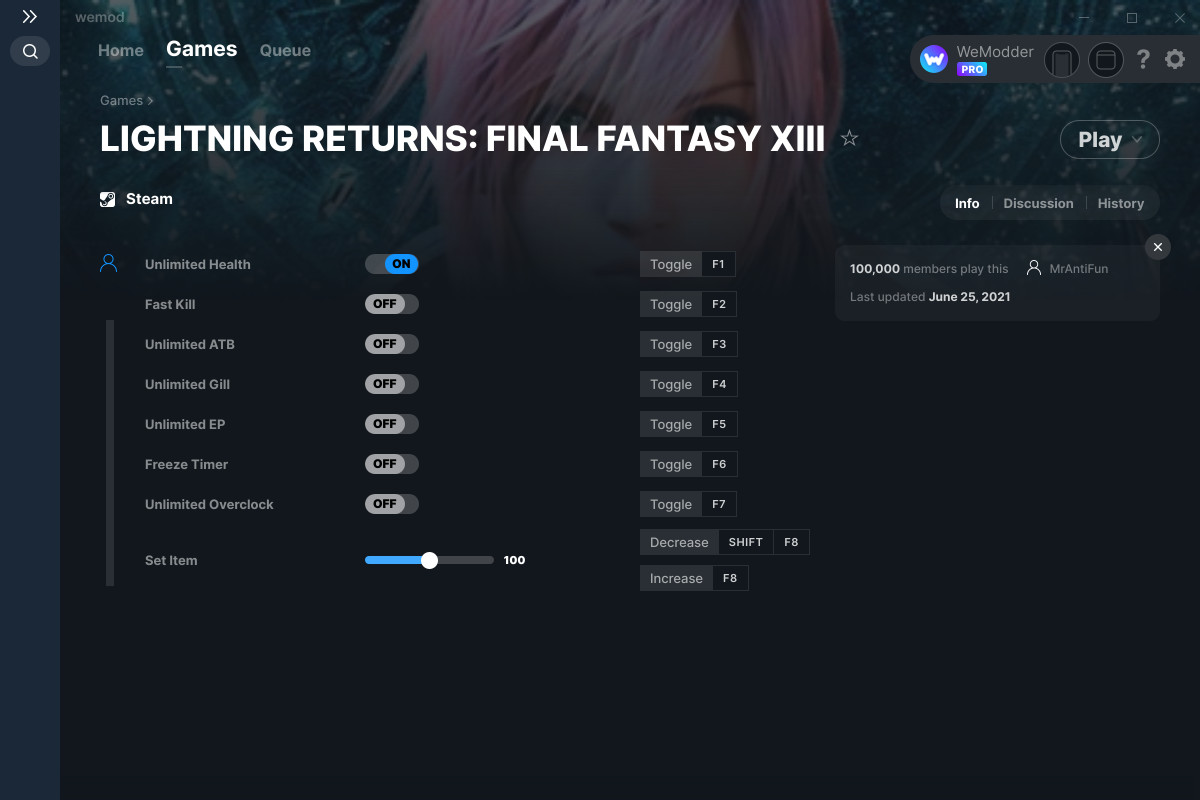 ive had so much anxiety waiting for this trainer

once im done playing ark im gonna go and use this trainer.
keep up the great work @STN

@STN so ive been using this trainer for last few hours and ive only come across 1 issue, after pressing unlimited items 1 time it continiously “endlessly” turns itself on and off rapidly until i press end game on the trainer the cheat works its just extremely annoying hearing that endless rapid toggle beeping noise until i “end game”, the only cheats ive use sofar are unlimited ATB, unlimited gil, unlimited ep, unlimited items, unlimited overclock duration, freeze time and custom jump height i have no need to use the unlimited health and zero atb(enemy) or easy kills on this playthrough all the ones ive used work great just the beeping needs to get fixed

I don’t think that’s a trainer issue but a bug with infinity. @frank ?

@STN i just tested it again turns out it was my keyboard, (i remap most keybinds to my numpad) and i accidently hit the num lock at the same time as numpad7 which i had set up for unlimited items, causing unlimited items (and prob any other cheat) to spaz out if pressing numlock at the same time as the cheat to fix this you got turn num lock back on the press the cheat again as turning numlock off turns the numpad area into a secondary arrow key pad essentially and turning it on allows the use of the numbers on the numpad

Is there any chance you can either change the Unlimited Items cheat to ignore abilities, or add another option that sets all item quantities to 1 in the same way it currently makes them 99? The current cheat is game breaking.

Abilities are only supposed to have a qty of 1, which means that if you have ever used the unlimited cheat all of the abilities you had at the time are pretty much broken, even if you deactivate the cheat afterwards. If they’re changed at all (synthesized, sold, discarded, leveled up) they’ll change to “Unknown Ability” which can’t be discarded in any way that I’ve found. I’m guessing is because the game intends to delete what it thinks is the only ability in that inventory slot, but the cheat adds more there that it’s not expecting so it just corrupts. I’m also getting duplicates of all of the abilities that don’t do anything except take up a second inventory slot, I assume that’s related somehow but can’t say for sure.

Early into a New Game+ you’ll hit the 400 abilities cap with no way to add/remove anything, which means if you win a new ability from battle, and that happens in most battles, you’ll be stuck in the discard menu with no way to exit.

Also @STN for future reference do I have to tag you or do you get notified automatically?

You get notified when someone posts in your thread too.

The LIGHTNING RETURNS: FINAL FANTASY XIII cheats have been updated!

Done. Should be 1 now

I did not think that through when I suggested it, sorry. It’s not a good solution.

My thought process was that you could have 99 of everything, then switch to 1 with an additional cheat when you needed to tinker with abilities to avoid corrupting them, but that deletes most of the other items you’ve collected in the game that you need multiples of (items to apply upgrades, or fetch quests for example), plus if you use the last of an item it empties the inventory slot so you can’t just reactivate the cheat to add another one.

If there’s no way you can separate the item types (or you don’t want to put the effort into figuring it out because it’s an older game nobody plays - which would be understandable), the best solution is to either remove the cheat altogether or put it back the way it was with a note that says something like, “This will irreversibly corrupt your collected abilities - use with caution.”

Thanks for the quick change though.

Oh, i’ll add another cheat that sets it to 99

The LIGHTNING RETURNS: FINAL FANTASY XIII cheats have been updated!

You can only use either reset or unlimited items cheat at a time.

Oh is reset new? sorry didn’t occur to me

Unknown ability is so waste !! What do i haave to do? Please tell me anyone…

Unknown ability Is so waste! What do I have to do ?

@swept7 What the heck is " unknown ability "