and im using the beta version of WEmod

Are you using it in multiplayer at all?
Do you have any other mods installed for the game?

@Veloxia no and no. I haven’t played multiplayer nor do i have any mods installed. It’s vanilla game with beta WeMod. I have verified game files and reinstalled WeMod neither helped.

Would be like: Adding 10 Members when clicking certain Button

just so I’m clear, I only need to hit play once I’ve loaded in? I can activate the cheats in-game, or do I need to do that from the main menu as well?

Would it be possible to make a cheat to one hit gates/doors?

The Mount & Blade II: Bannerlord cheats have been updated!

Stil having trouble with the cheats deactivating immediately after activating them.

hey, love the what you do. Would it be possible to get an infinite ammo cheat?

Movement Speed cheat didn’t appear to work consistently, and no longer functions at all for me. This is in the map not in a battle. The Attribute Point cheat also doesn’t seem to work, even after opening character menu repeatedly.

Overall another update is needed. I understand one was recently done but clearly there’s still some issues.

I don’t know why your own trainer stopped updating, there are still many people in your forum wanting you to update, Mount & Blade 2 is one of them.If you go to WEMOD, I also support it, but functions such as editing money and influence in this trainer I think WEMOD is not as convenient as your trainer. 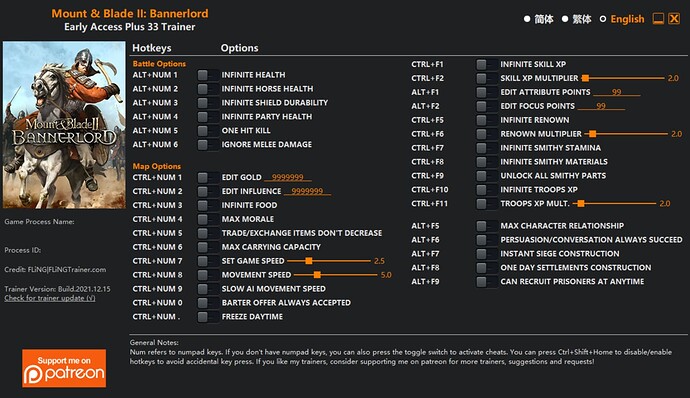 011547×893 133 KB
For example, in this picture, the editing money, influence, focus, attributes, and skill XP multipliers have buttons and sliders. I can set the value and turn on the function according to the situation.On WEMOD, these functions are not very friendly. For example, to edit money, I set it to 1M money first, but I can only have 1M money in the game, neither increase nor decrease. And when I choose to turn it off, my money goes back to what it was before it was modified

This pains me a lot, it would be great if the trainer on WEMOD could do the same as the one the author himself posted before, with buttons and sliders at the same time

Forgot one thing, in version 1.8, the game added the cheat function of adding soldiers, so the experience multiplier of soldiers is invalid in this version at least