Remnant: From the Ashes Cheats and Trainer for Steam

I don’t have steam installed in the C directory, but in G would this cause the problem?

It should be fine. But just in case, click the down arrow next to the Play button in the trainer and set a custom path to the game’s executable, which by default is C:\Program Files (x86)\Steam\steamapps\common\NAME_OF_GAME, but in your case maybe replace the C:\ for G:\ . Try this even if it already looks correct.

If you’re still getting an error, could you paste a screenshot of the error message, either in situ or by pressing CTRL+Shift+D on WeMod then clicking the Console tab?

here is the error message
https://img.photobucket.com/albums/v479/DrLight/Error%20message_zpsezdzeyh1.png

I’m also using bitdefender, however, the trainer works fine on my laptop, which also has bitdefender installed.

Something got blocked by your antivirus or firewall. A quick search on Google shows many Steam threads with this error for many games.

Open up your antivirus and check the quarantined / blocked list. Search for anything related to the game and then unblock it. Or if your antivirus already deleted it, you’ll probably have to verify the integrity again or even reinstall from scratch. You’ll then have to add that item as an exception in your antivirus. It’s not a WeMod or Steam issue, but an antivirus issue.

You’ll probably also need to follow this guide as well: How to white-list WeMod in BitDefender!

BitDefender is a trigger-happy cowboy that likes to block legit stuff. I’ve seen a screenshot here on this forum of BitDefender blocking someone’s command prompt program from running and another screenshot where it was also blocking a critical service that Windows 10 relies on to work properly. There are also reports online of BitDefender interfering with extremely important security features such as System Restore. I’d advise switching your antivirus to something a bit more intelligent. Sorry but BitDefender is the Mr Bean of antiviruses. Here’s a picture of BitDefender in real life (click).

working perfectly now. Thank you so much

whenever i activate it, it automatically turns off?

Hi please use English on here. Thanks.

hello everyone perfectly installed but with remnant from … I can’t activate f1 and f2 is activated and deactivated immediately.
why

Doesn’t work with the newly released update for the game.

Hello and welcome to the community.

that’s not showing up for me. it’s just listed as this 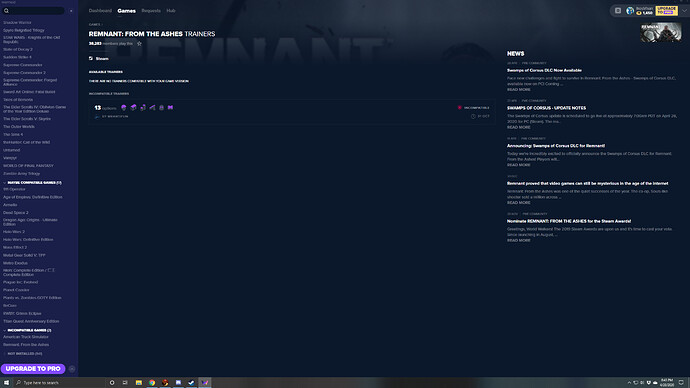 heyya start off thank you guys for all the hard work and great response time, I’m trying to request an update for this game but there is no option, some help or guidance would be much appreciated

No request update from the app. Would be nice.

When the Request button isn’t there, then it either means:

In the case of the latter, please be patient.

Also, thank you @zarcode for you kind words. And thank you for being a Pro member, it helps with trainer development a lot, we appreciate it.

But like the screenshot IkosVharr posted shows the Trainer is not compatible with the Game Version and in the Requests Updates Leaderboard the Game is nowhere to be found.
Sooo… there were people throwing Tokens so fast it was up and gone almost instantly?

Please read the post directly above yours, @RingDing. It explains all that you need to know.

ah ok thanks for the edit.

How long usually it takes to update the game . I have tried to use the cheats but sadly none of them works ;/

We do not give ETAs or status updates on trainers because there are too many things that affect it.