This is the official discussion topic of the Serious Sam 3 BFE Trainer and Cheats in the WeMod app. Please post any suggestions, bug reports, or praise that you may have for the cheats in here! 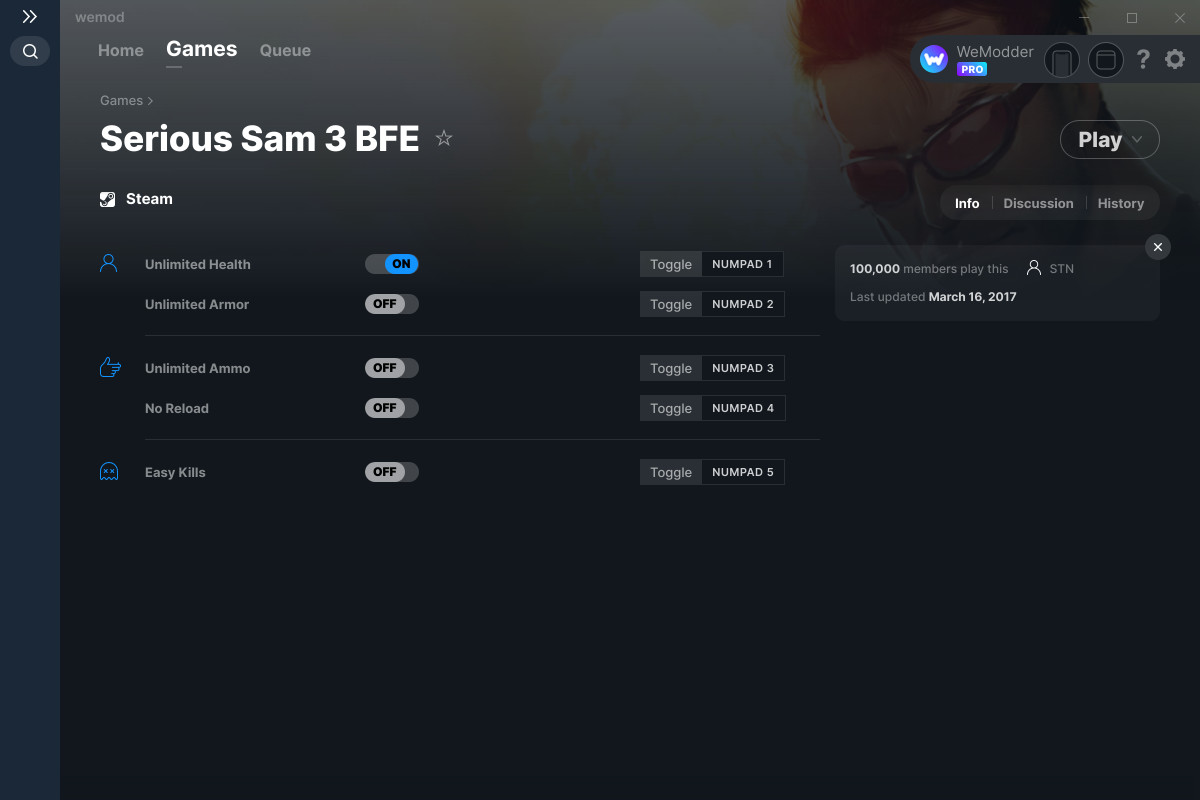 It disables achievements, any way to fix this?

Hey folks, been using this trainer for the last few days.

First off, thank you so much for it! There aren’t any other trainers that are even close to up to date, and they all disable achievements. I was pleased to see mine are still unlocking after I use it. They pop after I shut the game down which is not that unusual, although I think the vanilla game has them unlocking in real time. But, I digress. They unlock, and that’s all that matters.

I do have some issues with it though. Here they are.

First, Infinite Health is unusable. Whenever I press NUM 1 to activate it, my screen turns completely black. Interestingly, if I hit escape, I still can see the menu. If i turn it off, it still stays black. If i reload my save, things are back to normal though. Really stinks because this is probably the most desired cheat I wanted to use, just so I could get through serious difficulty (some of these boss fights are stupid (i’m looking at you level 5 mothership)

Infinite Armor doesn’t seem to be working as intended, or at least what I expect from such a cheat. When I press it, it adds 100 Armor, but it goes down whenever i take damage, so I can still get killed pretty fast as if i didn’t even use it (and since the infinite health cheat doesn’t work, there isn’t much of a point)

Easy Kills (aka 1 hit from anything will kill the enemy) works, but it also applies the effect to yourself, so any stray bullet or explosion blast is an instant death, so this is pretty useless. I wanted to use this to push through the levels faster, but yeah, hitscan enemies put me down the second they see me. It is a great cheat for bosses though if I can dodge.

Unlimited Ammo and No ReLoad work great! No issues. I’m getting by with just these two cheats, but I wish the first two worked too.

By the way, I did not and do not plan to use this with the DLC (jewel of the nile) because it is VAC secured. I don’t own it yet anyway.

Also, the game occasionally crashes during high intensity fights with lots of enemies, which only seems to happen with this trainer. To compensate, I even tried turning everything down to low/minimum/none and it doesn’t seem to make a difference. A small issue, but it isn’t every 5 minutes or anything. I’ll manage.

hmm, now about half way through level 7, in encountered a weird bug where enemies were taking my health down from 100 to 1 with one hit, and i couldn’t pick up any new health.

however, since that started happening, now the invincibility cheat triggered with NUM 1 actually works! my screen doesn’t black out. so i can at least negate this new bug.

The downside is the easy kills cheat doesn’t work, even if its the only one I use. No more 1 hit kills on bosses. (which was crucial because they teleport you away from the boss battle when you cheat)

downside, it also has caused the invincible mini red scorpions to show up. but, i can just ignore them it seems. i restarted the level and just used infinite health and they didn’t show up

the game also tends to crash when i activate certain cheats at the same time. i’ve seen it crash when i had infinite health and also turned on armor, or easy kills. those quicksaves tend to crash when i try to re-load them so i have to go back a few.

What would really come in handy is a save location, load location teleport system. That way when I shoot a boss, and it teleports me back to the beginning of the level, I can just load my spot and hit them again faster. I just ran through the entire level about 10 times, haha. The devs are some cheeky mofos.

Thanks again though for the trainer!

, despite the issues, I am getting through serious difficulty, and getting my achievements at the same time. (a tip is to turn off auto save and don’t quick save, so the game doesn’t go into “CHEATS ENABLED” mode.
I’m also crashing a lot less when I stop firing nonstop spam. I think the engine was getting overwhelmed.

Try the trainer in the latest update!

If you are referring to the one from 8 days ago, I didn’t start using Infinity Trainer until 3 days ago, so it should be the latest.

and actually, i tried just using the easy kills cheat, and it only applies the effect to me now! enemies are uneffected, but i still die instantly with a single hit.

Now the good news is I was able to pass the final boss fight regardless, because i worked around the dev trolling me

mission accomplished, i have achievements, most importantly to beat the game on serious, and to beat the final level without saving or reloading.

and that’s all that matters. thank you !

It seems like the trainer is detected by the game, this will print an “Enabled Cheats” text on the corner of the game, enemies will become giants and an invincible scorpio appear. This is the same thing that the game does when detect a pirate copy (of course i have a legit copy on steam) 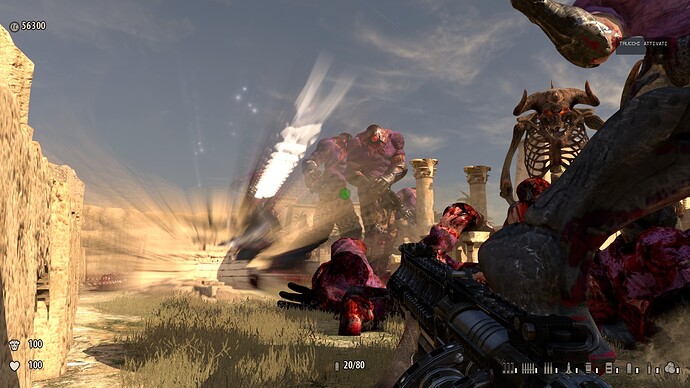 Hey @STN I know you on holiday and stuff… but any chance this will be updated ?

Looks like the last game update was released april 2013. http://store.steampowered.com/news/?appids=41070&appgroupname=Serious+Sam+3%3A+BFE&feed=steam_updates

Pretty much everything, like they all work, but it has some nasty anti hack stuff there… like it spawns huge unkillable stuff… and keeps spawning them… and eventually becomes unplayable…

Not sure how i can help with that. It’s the game’s anticheat that’s enabled on steam for some reason for single player.

You can get a pirated copy which is free of this crap (and what i used). Or maybe write to the game devs ?

it says “cheats enabled” after the first checkpoint and also scorpion enemies are unkillable and they teleport together with you. so no reason to use it

I know I’m really late to this party and all that. But I have to tell you what that invincible red scorpion is all about.

It’s not an anti-cheat deterrent. The game has a cheat menu that covers pretty much everything in the trainer. It’s Corteam’s version of anti-piracy. How I know this is because once upon a time, I had pirated the original (Serious Sam) and was so enamored with it, that I went out and did the same with The Second Encounter. I bought Serious Sam 2 on the 360, and when Serious Sam 3 came out, I was like “I’ll download it, and see what it’s like”. That’s when I met the red scorpion I couldn’t kill. It only shows up once you hit a certain archway in the game, and I couldn’t stop laughing. Such a creative way to keep pirated games under control…

I bought Serious Sam:The First Encounter, The Second Encounter, Revolution, Fusion 2017, the HD remakes, Serious Sam 2, and Serious Sam 3, all on Steam. The red scorpion doesn’t show up if you use the cheat menu in the game, but it does say “Cheats Enabled” on the screen, tells you that you “Cheated” between chapters in the game, and disables achievements.

No. It’s for singleplayer only