State of Decay 2: Juggernaut Edition Cheats and Trainer for Xbox

This is the official discussion topic of the State of Decay 2: Juggernaut Edition Trainer and Cheats in the WeMod app. Please post any suggestions, bug reports, or praise that you may have for the cheats in here! 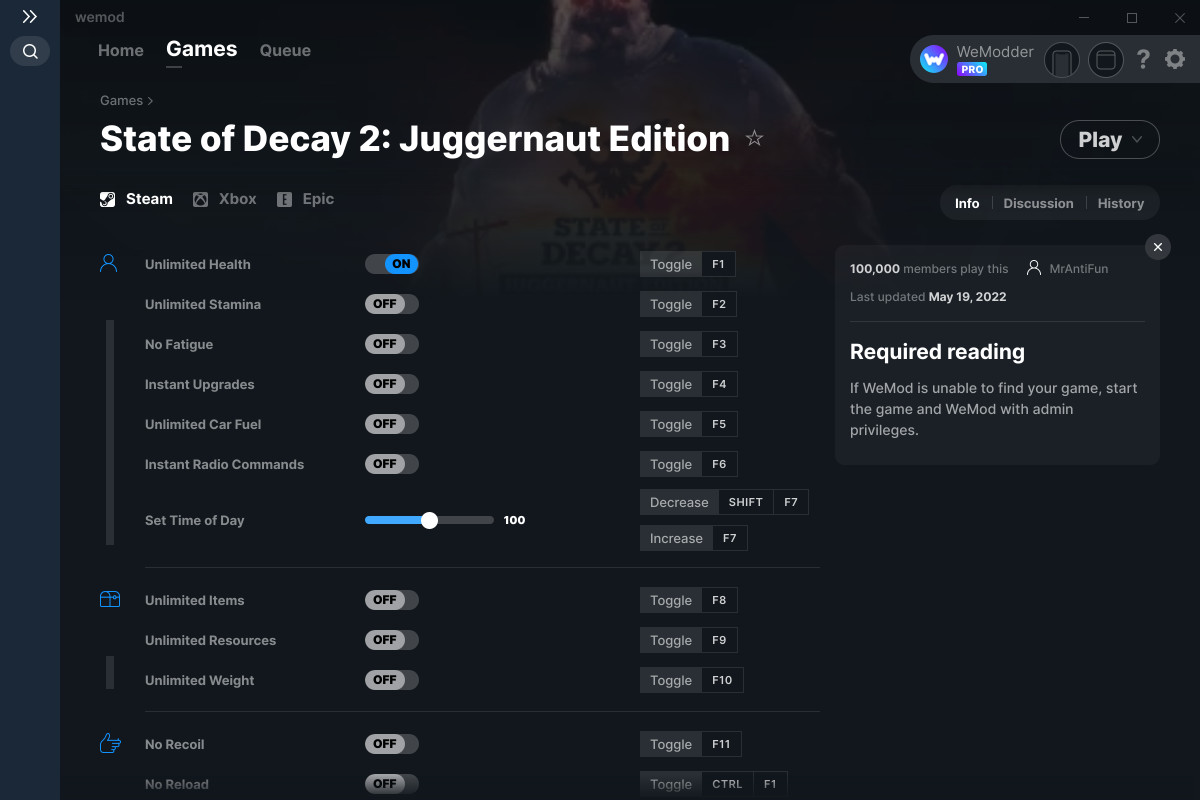 The State of Decay 2 (Windows Store) cheats have been updated!

Wemod can’t detect the game, says it is not installed. Can’t set custom directory either because windows blocks access to the game’s folder, have to meddle with permissions and really can’t be bothered… any workarounds?

Edit: Even tried to make a desktop shortcut and link to that but didn’t work.

You need to select the correct trainer in WeMod.

It says that it isn’t installed. 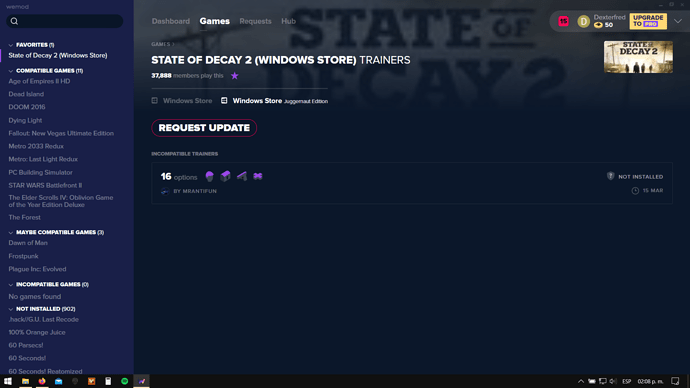 Do you have the Windows store version or Steam? Also did you uninstall SOD2 and reinstall? If you didn’t then you still have the normal version of SOD2. There was no way to update without reinstalling it.

Yea, got the Windows Store version, deleted and already downloaded the newest update. I was checking since yesterday to get the new trainer, but as well as @pasc96, the trainer says that I don’t have the game installed.

Yes reinstalled today jugg edition but on wemod app it’s just not there.
Even tried swapping between versions to doublecheck.

I’ve reinstalled the game twice and the app was not able to detect it. I found the executables in the WindowsApps folder but it is not able to be opened through that method. It says there is an error if I try to open it.

man, a steam version would be nice.

Added custom install since I have game downloaded to my D: drive - path to exe = D:\Program Files\ModifiableWindowsApps\StateOfDecay2\StateOfDecay2\Binaries\Win64. When I click on the Play button I get the same message as others about having trouble locating. If I start the game then the trainer will load. As far as I can tell all things are working except Unlimited Ammo. Tried switching weapons, pull different weapon from Inventory, nothing works. They just eat ammo and run out. Running latest version Win10 Pro.

Wemod won’t find the game for me either way…

same thing w everybody, my wemod cant find it via dragging the shortcut or the custom exe

I got it working by finding the correct exe. To find it, open the game and then open task manager. Find the SoD2 process in the list, then right click and Open File Location. Then, drag that executable into WeMod and click play and it should detect it. Regardless, the trainer should be updated so that it detects the correct executable automatically.

ALSO, like bleepthis said, Unlimited Ammo does not work, and I’m assuming that the No Reload option does not work either.

I just tried it No Reload and Unlimited Ammo don’t work.

just like everyone else it’s not showing installed for me. re-installed it three times no luck. manually linking the EXE fails or shows that i lack permission. Took all the steps to give myself permission but wemod keeps failing. Every other game i have doesn’t do this. only SOD2

Make sure the executable linked in the WeMod desktop app is correct. It’s possible the trainer is looking in the wrong place for the executable.

Yep. The task manager option doesn’t work as the OFL is grayed out