Symphony of War: The Nephilim Saga Cheats and Trainer for Steam

This is the official discussion topic of the Symphony of War: The Nephilim Saga Trainer and Cheats in the WeMod app. Please post any suggestions, bug reports, or praise that you may have for the cheats in here! 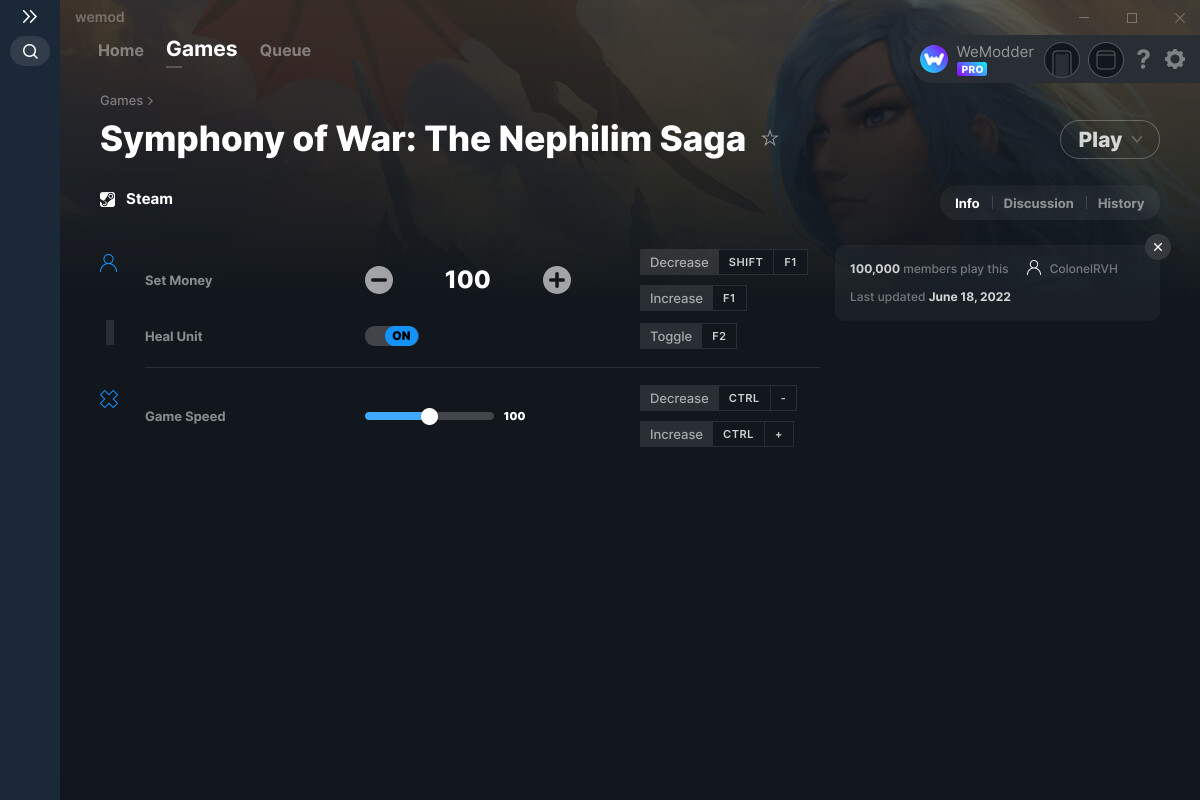 The Symphony of War: The Nephilim Saga cheats have been updated!

YES was hoping for cheats for this game, can’t wait to see what else y’all do

mINE IS TELLING ME INSTALL GAME. i’M NOT SURE WHATS CAUSING THAT.

Try to restart WeMod, there was a problem with the game exe.

Thank you. Is there a possibility to add more options? I’d love to see infinite tokens or movement. Cheers!

Glad to see the cheats flowin in. I would just love a “cap” increase.

Hp cheat changes the first value of the hp stat not the permanent value . Then goes back down to base stat. Max exp might be easier one to add after killing an enemy .

I’m afraid not, the game is already very difficult to work with being RPG Maker, most cheat maker would’ve skipped this game. The problem is the code accesses too many different things at once so if you’re careless you will break the save file often.

I have tried all 3 cheat and they don’t seen to be working and I have restarted my game and WeMod a few times as well and nothing seems to work.

Is it possible the next cheat could be an XP one or max stats so I could have max armies out in force.

The HP mod is causing crashes, it sets a units HP to an infinite value when you hover over it but when the unit takes damage the HP value goes back to its original value, then the mod tries to come into effect and reup the value to infinite again which closes the game entirely.

If anything I would love just having 999 arena tokens, that way we can farm exp and cp infinitely without the need for exp, cp, or any stat mods whatsoever.

EDIT: So the HP mod doesn’t cause crashing now because it does what it says it’s supposed to now (adds 100 HP) however once you initiate battle the HP drops back down to the original amount and doesn’t carry over. The cheat is essentially useless honestly because the additional 100s you add on all go away after you fight one time and in most cases don’t even apply in battle. I’ve had a character with 5k HP die to a 300 damage hit because their original HP was less than 300.

Which version is it? And the Heal Unit should add 100 every time you hover it. It can get pass the max number but that’s about it, not infinite. I notice the dev announce v1.0b early but I’m still getting v1.0a here. You can also post the save file for inspection.

Doesnt matter . Hp still drops based on the max HP . All the excess drops with it .

The cheats seems not working.

all 3 Cheats works fine for me.
Squad Cap or Movemend would be Interesting , but mutch more Tech Token / Empire Exp for Research

But that´s only my dream G

I think this needs an update. The heal unit seems to have stopped