The Binding of Isaac: Rebirth Cheats and Trainer for Steam

This is the official discussion topic of the The Binding of Isaac: Rebirth Trainer and Cheats in the WeMod app. Please post any suggestions, bug reports, or praise that you may have for the cheats in here! 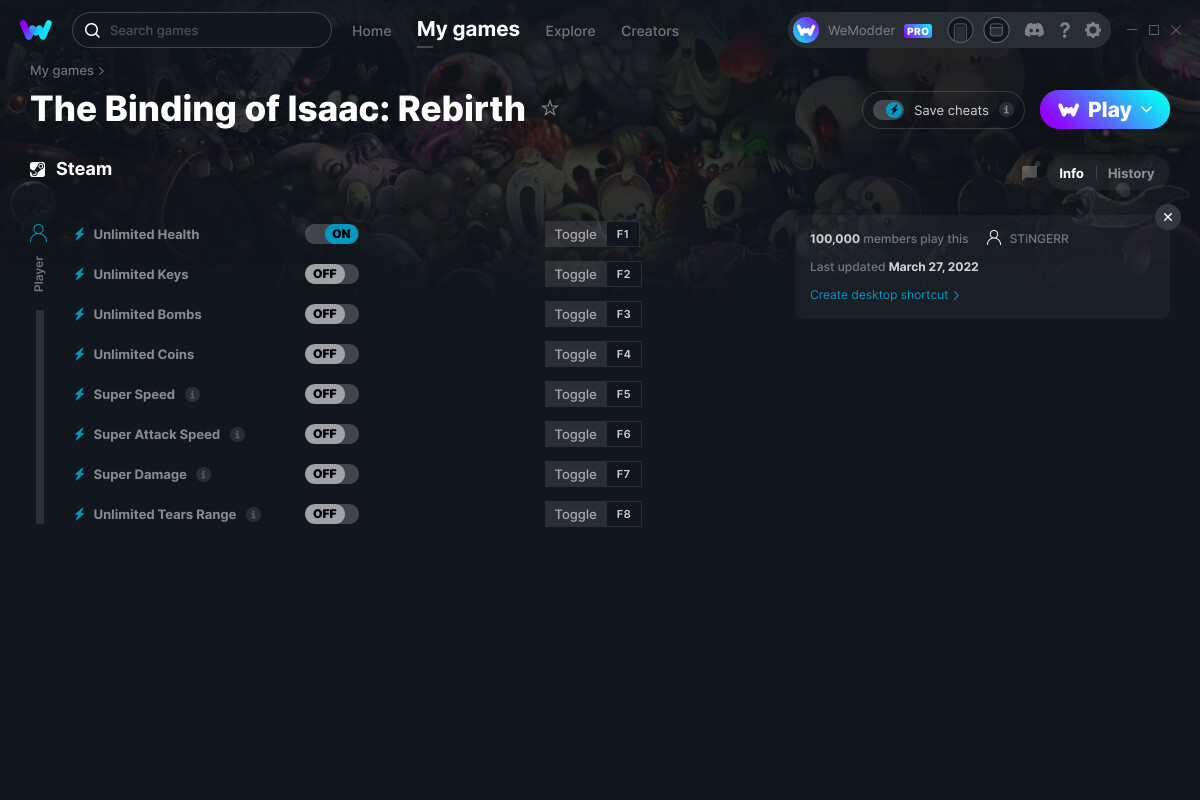 What a coincidence, as I was searching for some good INDIE games, and this game was on top of list. Never played this game, but I think it’s pretty good, imo.

Btw, is the DLC named Afterbirth, or “Antibirth” ?

Antibirth is a fan-made expansion pack.

Okay @N1ceToMeetYou , thanks for the clarification. The naming just got me confused for a minute, but now I get the point.

Does this not work with the afterbirth DLC?

Afterbirth is a different game.

Blame the devs for making this sh1t so confusing.

Always thought Afterbirth is just a DLC and gives new content. If it’s a different game why list it under DLC?

Beats me. If it was up to me, i would be content with just one trainer for all births and deaths.

Damn. looks like we need to get afterbirth and afterbirth+ on the front page to vote for trainers lol

Can anyone help me? I have been using Infinity for a while and I like it a lot. When i use this trainer on rebirth it works fine, but when i try it on Antibirth, Infinity can’t detect the game. I’m using the most recent version of infinity and Antibirth (The version that can go in a separate folder). Maybe it is because Antibirth is in a different folder, but I’m not sure. If it does have to be in the rebirth folder some where, i would appreciate the help. Thanks!

I was under the impression Antibirth is always installed in Rebirth’s folder. Does it have a different EXE?

Well it makes a completely different shortcut on your desktop when you install it so I assume yes. But when i go in the Antibirth folder the application also says “isaac-ng” like in the rebirth folder. Maybe copying these items into the rebirth folder would work? If that works then thanks for replying back, it helped me think of the idea

Good news! transferring the files worked. Thank you for replying, talking to someone really helped me think about it and think of the idea. Thanks!

Could i make a suggestion for a cheat?
Would it be possible to have infinite use of Active items (such as D6)?

Hey, I got the dlc for Binding of Isaac Rebirth, (which is called afterbirth or afterbirth +). And it seems that the new dlc has gotten the mods not to work. I can activate the application and it starts the game but none of the mods work. So if there was anyway that you could make the new dlc work with the game that would be much appreciated. I love this game and just having infinite everything is hilarious and so much fun.

Afterbirth is a different game than rebirth/antibirth.

Blame the game devs for using the most confusing and useless names for their games. Request it here - https://www.wemod.com/cheats/the-binding-of-isaac-afterbirth

Have you tried manually finding the game. Is it using official DRM or cracked?

@HowlingMoon1106 had a similar problem, and solved i this way