The Lord of the Rings: The Battle for Middle-earth II: The Rise of the Witch-king Cheats and Trainer

This is the official discussion topic of the The Lord of the Rings: The Battle for Middle-earth II: The Rise of the Witch-king Trainer and Cheats in the WeMod app. Please post any suggestions, bug reports, or praise that you may have for the cheats in here! 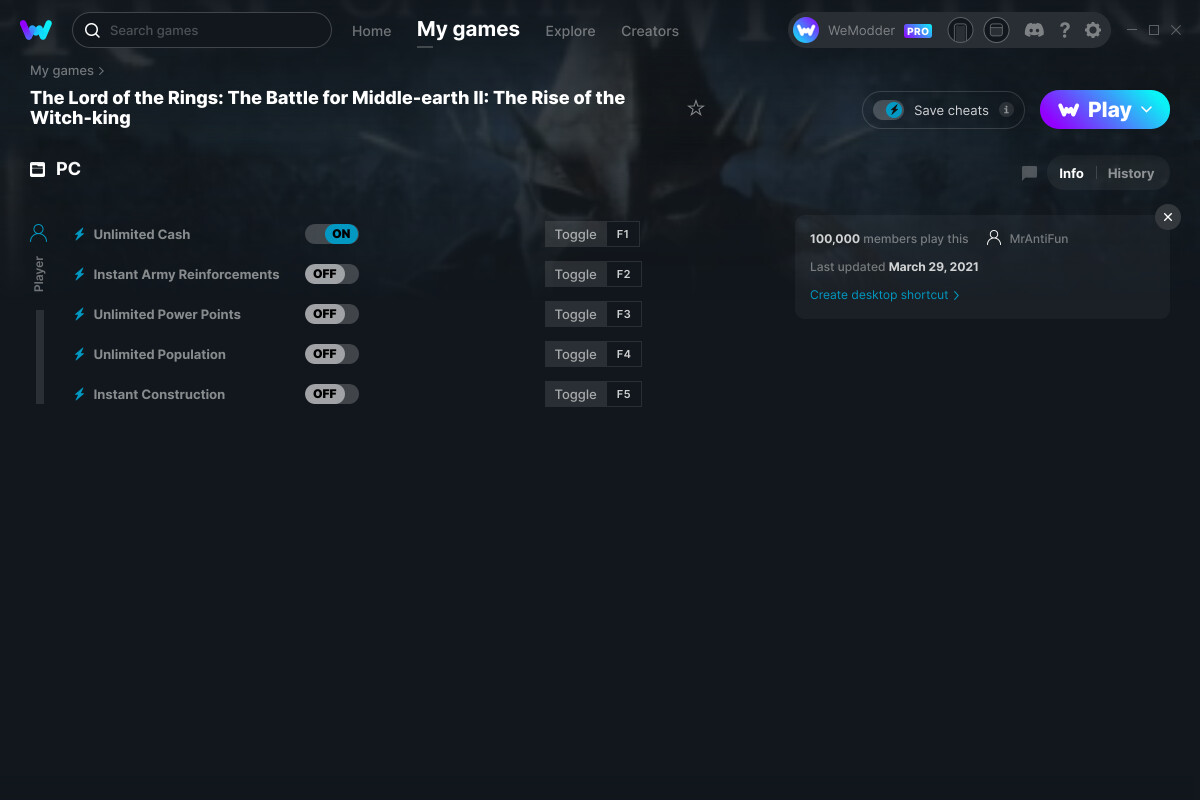 The The Lord of the Rings: The Battle for Middle-earth II: The Rise of the Witch-king cheats have been updated!

Wemod didnt even recognize the game was install but once i put the custom path directory and have it launch the game, cheats just activate then deactivate where nothing happens

Hi, all cheats work as they should, however, i noticed that Walls are built instantly, but everyone can go through, as if it wasn’t there, also could you consider making another cheat for War of Ring, Exp for heroes, instant respawn, and skill cooldowns? You made my day with BFME 2 cheats sir!

Where did you get your copy of the game from?

The trainer is unlikely to work with pirated, cracked or “abandonware” versions of the game.

Page 1 of 40 - [BFME1/BFME2/ROTWK] Games Download & Installation Guide - posted in T3A:Online Support and Discussion: Hello everyone, By now we reach the time when our good old original disks reach their date of expiry and are expected to show...

this is where I get mine. all of these are the best and easiest installs. plus the game isn’t sold anymore

with the base game of BFME2 the cheats work but with rise of the witch king it just activates then auto deactivates right away.

There’s an issue of the cheat and did not detect… when i install the game and drag the file into wemod somehow the cheats didnt work. is there able to fix this?

That would be awesome if u add this <3

Hi I’ve a problem, I’m a pro user, when star the game and I use a cheat it’s doesnt start, it doesn’t stay on On button but come back to OFF button

What can I do?

This is really really great idea tbh, and maybe some stuff for War of The Ring too!

Cheats are absolutely borked.
The game itself is just about impossible to buy any longer. a few copies are on ebay and such for exorbitant prices, but otherwise there is no way to get the game except pirating it.
I believe that any trainer for the game should be made using the current community patch version of the game which can be found here: How to download and install Rise of the Witch-king -
Anyone still playing this game uses this as the game itself is no longer officially supported.

Yeah, this trainer is not working. if you’re lucky like i am and have one of the MAF trainers from before he went on to join WeMod those still works. but this trainer simply wont work.

What is the game version you using?, Game was created using V1.06, If you have fresh installed game please download the updates. @xentionX @Bamioum @Erundil21 @doods1034

Mine is version 2.1 of the game that is why it is not working

still have the base game on disc version 2.00. same issues as previous guys, clicks on
and then auto shuts off. hope to get an update on a fix for this soon.

May have found a solution for the cheats not working (aka activating and immediately deactivating) for cracked / pirated versions of the game. Instead of using WeMod’s app, just download Mr. Antifun’s trainer directly from the website and use it. Haven’t had any issues using the cheats.

Tried Downloading the trainer directly , Still shuts off : this needs a update , and as comments say
You cant get the game anymore I get it from RotWK Patch 2.02 v8.0.0 Download Page - Rise of the Witch King - GameReplays.org , only way to get it now really ,
So Please update this !