The Riftbreaker Cheats and Trainer for Steam

This is the official discussion topic of the The Riftbreaker Trainer and Cheats in the WeMod app. Please post any suggestions, bug reports, or praise that you may have for the cheats in here! 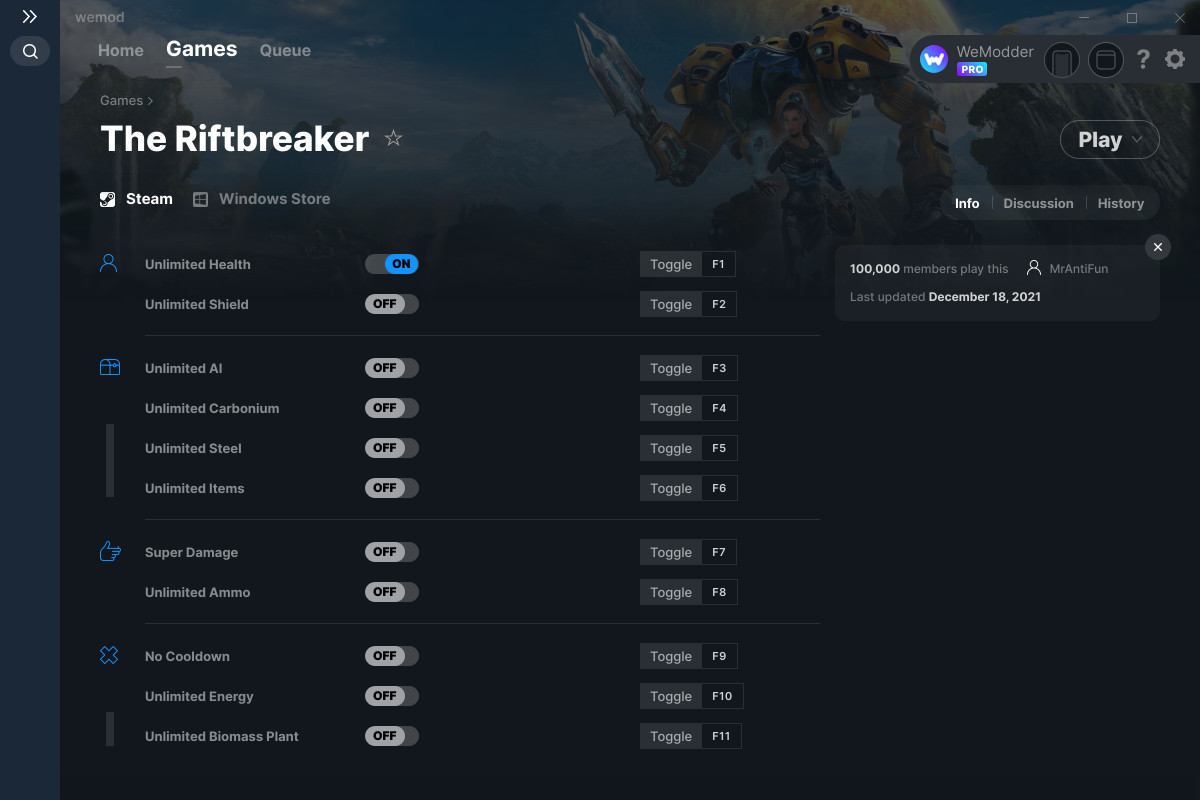 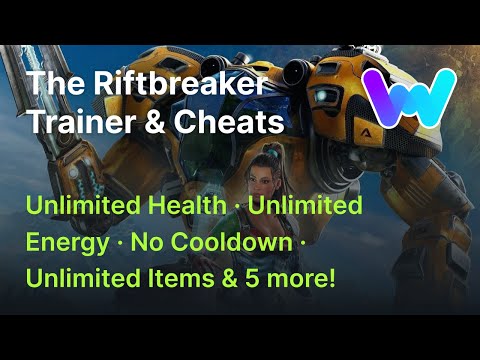 Thanks for making the trainer MAF !

just want to suggest maybe in future there is a cheat to instantly finish the research, that would be really helpful to the game.

edit : also just notice that would be great if there is instant construction cheat too.

Really hope a trainer for the windows version gets added since that’s what I thought I was boosting.

@jigglyrobot Same here. GamePass should be taken more seriously now that it’s really popular to have free decent games come out on day one.

Don’t suppose we could get cheats for the other resources (Specifically: Cobalt, Palladium, Uranium, Titanium, Ferdonite, Tanzanite, Hazenite and Rhodonite)? That would be nice.

As Karacha said, would love to see options for other resources. However unlimited tower and base structure health option would be really nice.

As king Leonidas said, “A good Start.” Thanks for this trainer. I’d like to recommend something that finishes current research. Not something that gives all research, that’s too much.

Maybe WeMod could take advantage of the sandbox mode’s control panel cheats (you open it by pressing F11, by the way). These include instantly finishing current research, granting all resources, and skipping to morning or night.

The The Riftbreaker cheats have been updated!

cheats don’t work. Through the wemod program, I start the game. the game starts …cheats are not activated on the main menu not in the game. please fix it

Get more add too Unlimited for mine all. but only Carbonium and Steel did unlimited. so need too them all. what I mean. like Cobalt, Palladium, Titanium, Crude Uranium.

you did good that.

what u think good?

error I launch Wemod, then I launch the game through it…the game starts the main menu. and wemod disconnects from the game. like, start the game again.

The cheats were workin’ 100% fine yesterday for me & other times I played, not sure what could be the cause here (other then a small patch or somethin’), but it would need to be fixed/ updated before we can continue using these cheats…

PSA: The game has some built-in cheats that, as of now, do not disable achievements, so these can be used to fill some gaps with the WeMod trainer. Simply hit ~ (above the Tab key, if you don’t know), and enter these (Ctrl+C/Ctrl+V doesn’t seem to work, have to manually enter them):

cheat_add_all_items 1
(Gives one of every weapon, equipment item, consumable, movement ability and weapon mod at each quality level, including some weapons that can’t be removed from inventory. Note that equipment items and weapon mods have some RNG for their stats and you’ll only get one mod of each basic type and quality, not every possible variation, e.g. you’ll only get one t4 Damage mod of a random element, not one for each element. Most lower tier consumables will vanish if you have the research for a higher tier. Don’t use too many times, lots of items in one category will make the game chug when looking at the menus to select them.)

cheat_enable_debug_menu 1
(Enables the debug menu which you can open with F11, offers a number of cheat options, including spawning any enemies you want in an attack wave, instantly finishing research (note that the ‘Finish all research option’ unlocks/finishes every research in the game instantly, not just the ones you have queued up), filling resources (fills Carbonium, Ironium, Cobalt, Uranium, Titanium and Palladium up to your current storage caps. No effect on Ferdonite, Tanzanite, Hazenite, Rhodonite or any liquids, as far as I can tell), and starting weather events (only seems to work if a weather event isn’t currently happening), as well as toggles to unlock all buildings, making structures free to build, and giving infinite ammo and resources (doesn’t fill resources, and you still need to gather enough to meet crafting requirements to make weapons/equipment/etc., but building/crafting won’t deduct any resources from your storage).)

cheat_reveal_minimap 1
(Removes the fog of war from the map, revealing all enemies, resources, etc., also acts as radar coverage for both light and heavy artillery turrets, allowing them to attack up to their max range.)

cheat_god_mode 1
(Makes you invincible. I haven’t felt the need to use it, so I don’t know if it works on buildings or just your mech.)

cheat_set_player_health #
(Replace # with any number between 1 and 9999 to set your health as that number.)

cheat_set_player_invisibility 1
(Acts like the stealth movement ability, but can’t be disabled by attacking or taking damage. Can also swap the 1 for a 0 to fix an issue with the stealth ability getting stuck.)

cheat_no_clip 1
(Lets you move through solid obstacles like walls and rocks.)

cheat_remove_all_units 1
(Haven’t used it myself, but I was told it despawns all enemies from the map and can be used to fix glitches with turrets shooting at enemies that don’t exist or quests that require you to kill all enemies in a wave getting stuck.)

The The Riftbreaker cheats have been updated!