Torment: Tides of Numenera Cheats and Trainer for Steam

This is the official discussion topic of the Torment: Tides of Numenera Trainer and Cheats in the WeMod app. Please post any suggestions, bug reports, or praise that you may have for the cheats in here! 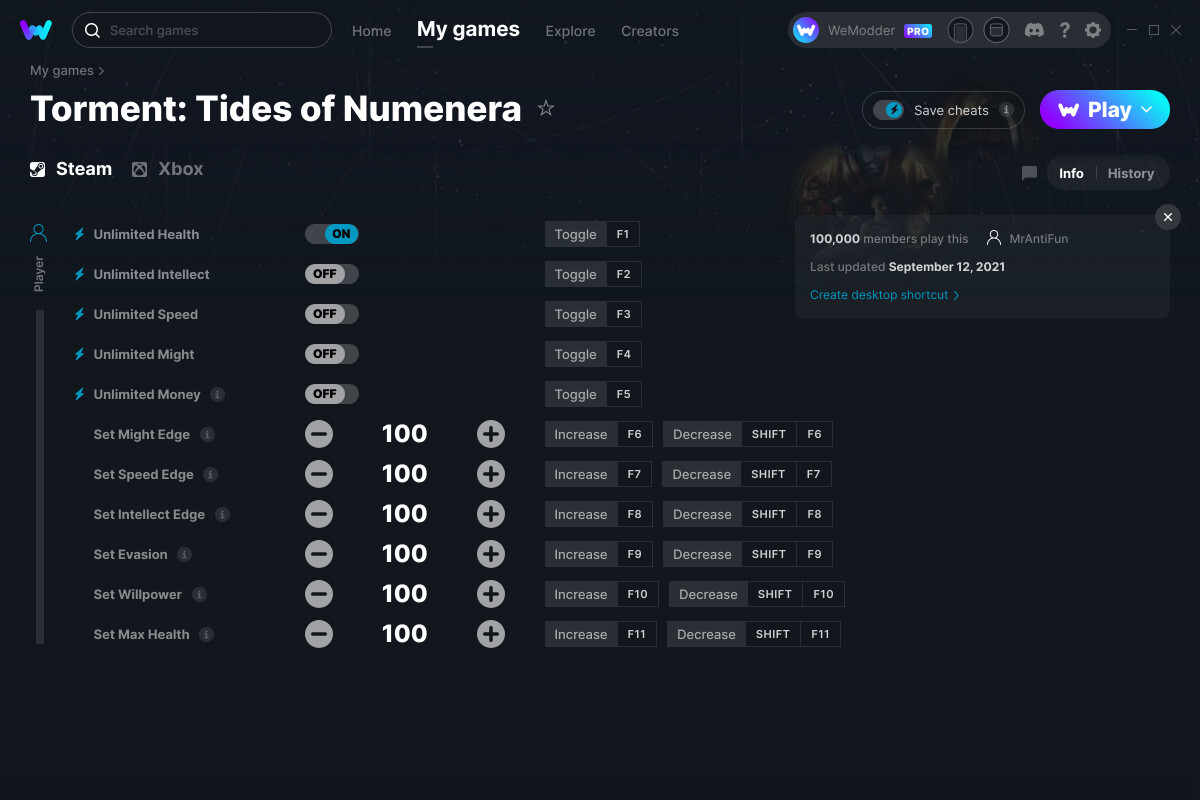 i wish this game was cheaper then id totally buy it

For some reason the game doesnt detect any installion directories for this game, I dont know why. I have tried the GOG games directory for torment, the other appdata directory and nothing has worked

Where in C:\GOG Games\Torment - Tides of Numenera is the game exe located ? It should be in WIN\TidesOfNumenera.exe, if its not let me know where it is.

There’s no WIN folder in the Torment - Tides of Numenera Folder, The exe is simply just in;

Okay try now. I hope the exe is named “TidesOfNumenera.exe” at least

Do they stay activated or turn htemselves off?

Thank you for the quick response; greatly appreciated! They appear as active, but don’t do anything

Maybe the game updated? Was there any recent update to the game?

05-22-2017 is the last message containing an update on the community site for the game.

The same is happening to me, When i try to activate any of the cheats. none of them work at all

Cheats don’t work, alas.
Hey bro, if they worked once, you created a great thing, but if they don’t work no more, for anyone, don’t leave us hanging, and just say it.
Saves everyone time and frustration.
Respect.

I’m just gonna put this here and maybe you’ll understand why no update has been made yet.

Yep, got it… You got a shitload of work. I’ll do my best not to be an impatient ingrate son of a cockroach in the future.
Thanks for all your effort!

BTW, nice to meet you too!

I’ve had a bug I stumbled upon while playing that will break/crash the game just wanted to forewarn others of this minor inconvenience
I activated health and max edge options during the beginning character creation before my first encounter with the sorrow and after the battle when you use the portal to go to your body the game will straight up freeze at 15% on the loading screen and crash at first thought it was a fluke but managed to replicate several times on two different computers. not game ruining but def annoying.

-TLDR don’t start the trainer until you’ve officially made your character and go through the portal after fighting The Sorrow!!!

So it appears that the Money cheat works fine. The others don’t appear to work. Just curious if there’s a timeline on updating this trainer?