This is the official discussion topic of the Ultimate Admiral: Dreadnoughts Trainer and Cheats in the WeMod app. Please post any suggestions, bug reports, or praise that you may have for the cheats in here! 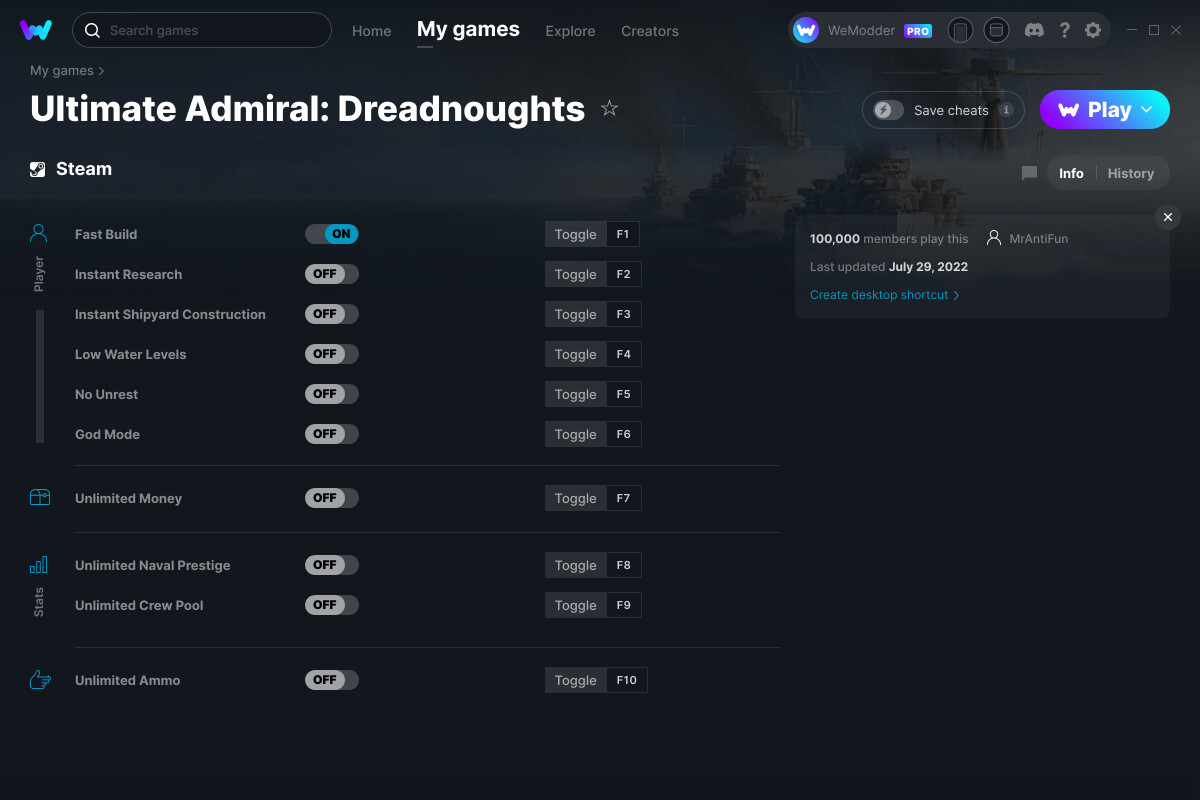 Great work. The value of 100,000,000 for unlimited cash does not work well for later in the campaign as some ship builds cost over that and are thus impossible to build. Maybe bumping that value up to 100bil?

For some reason the trainer won’t load for me i clicked play in the wemod app and that didn’t even launch the game and when i have the game running it doesnt detect that the game is running.

With you on this, cant build any good ships after 1900 cause they are all too expensive :c

This is really great. Thank you so much for this.

One thing I would like is the removal of restrictions around weight as that’s the limiting factor in the arcade mode.

What could be a simple number in the script that anyone could edit themselves or even re-upload the fixed cheat table, is now a fancy useless “app” that’s forcing people to wait days for someone to change one simple number. What are the benefits of such an enclosed system? I don’t see any unless they are either malicious or incompetent. Creators should’ve been switching to cheat tables where any code can be verified and hotkeys set to whatever buttons you want, but nope, they have to act like big greedy software devs prioritizing look over usefulness.

I agree. It needs to be at least 10 billion. Like, bare minimum, 10 billion, I mean. 100 billion would be better. Don’t get stupid with it and make 1 trillion.

I have to say that I’m impressed you made this work, though. Like, I tried for days to crack it. I was 2 days in when you released this and I rejoiced.

It would be absolutly amazing if the amount of money that is set could be higher, as it already has been said.

when could we expect a change there?

Definitely Feel like the budget could be set FAR higher make it viable to use the unlimited budget later on in the campaign.

Ok people, as it seems that MrAntifun fuped the ‘infinite budget’ big time, making it lower than literally 1/10th of the price of a battleship that you could technically create with other cheats in here let me provide you quick guide how to get an ACTUAL unlimited budget as long as you do not, for any reason start up the ‘unlimited money’ cheat.

It will basically be done via process of save editing, and taking into account two trivial details: Money in campaign is tracked by floating point decimal number and the save file is unencrypted.

Step 1 - start up campaign, or continue one
Step 2 - go to %appdata%\LocalLow\Game Labs\Ultimate Admiral Dreadnoughts\save_0.json
Step 3 - you will see campaign version, current date and finally - players. there will be name of your country [germany or britain] and chain: "isMain":true,"isAi":false,"isMajor":true,"budgetBase":1.0,"cash":57749824.0
cash will be different, budgetBase might be different, but find this line nonetheless
Step 4 - replace whatever number is in fragment "cash":57749824.0 with "cash":1.000008E+25 This will basically make you have a bit more than 10 septilion [short scale] money units. However it will be acting as if infinite. Let me elaborate:

If we assume that most expensive ship you can viably make is 10 billion money that’s 10^10; As you can see the precision for float here is 6 digits tracked; So the change would be below precision provided by the cash. So it will be rounded up after the turn right after everything is calculated. To put it into perspective - you’d need roughly 500 million battleships, costing 10 billion money every turn worth of expenditure to see any change in your funds.

Unfortunately this one doesn’t work for naval academy, and while there are scripts that can work when using cheat engine, I would not be welcome to provide the code for that here.

On somewhat related note - it does show a bit how much testing beyond ‘does it seem to work initially’ goes into those scripts, no matter how high quality the cheats themselves are.

Create a campaign and exit it. It would be safe to not be in the file you are actively editing.
I was only able to find the file through a search for “admiral” in the C drive. An issue because everything game related is in a separate drive for my case. Anyway, open the “save_0.json” file using Notepad, hit ctrl F and type “budget.” The line for me was “budgetBase”:2.0,“cash”:xxx instead of budgetbase 1.0. That was the correct one for me at least. Paste the 1.000008E+25 there where the numbers are and save the file. Then open up the campaign and you should be set for 10^25 $.

Budgetbase will change income itself, I recommended changing cash pool, as it does not modify other elements just infinite cash. I am afraid I am unsure how increase in income will influence other areas such as research/training sliders, especially in the long run.

%appdata% is short for C:\users\username\AppData (as is default) or any other folder that is recognized as application data folder in system. It is different from Game data folder which is wherever you installed the game.

It should be noted that it is possible to edit also technology, but it is more complex copy-paste; It also can change starting techs e.g. in 1890 to 1940 supertech [with tech levels of 200 for example, though it may impact weight and cost heavily].

I ran the game until 1910 (started in 1890) and a strange thing occurred. I automatically lost due to Naval Reputation jumping from 30 to -510, insta loss. No indication as to why the rep spiked negative. My guess is either a general overlapping bug or there is a hidden time limit for campaigns.

the 1.03 just released broke the trainer, all the cheats still seems works but, the custom battles i tried it in crashed after first enemy kill when i had any cheat active

Really need freeze ship weight option. It seems hard to be made since i have read the CE forum and didnt understand much