This is the official discussion topic of the BLEACH Brave Souls Trainer and Cheats in the WeMod app. Please post any suggestions, bug reports, or praise that you may have for the cheats in here! 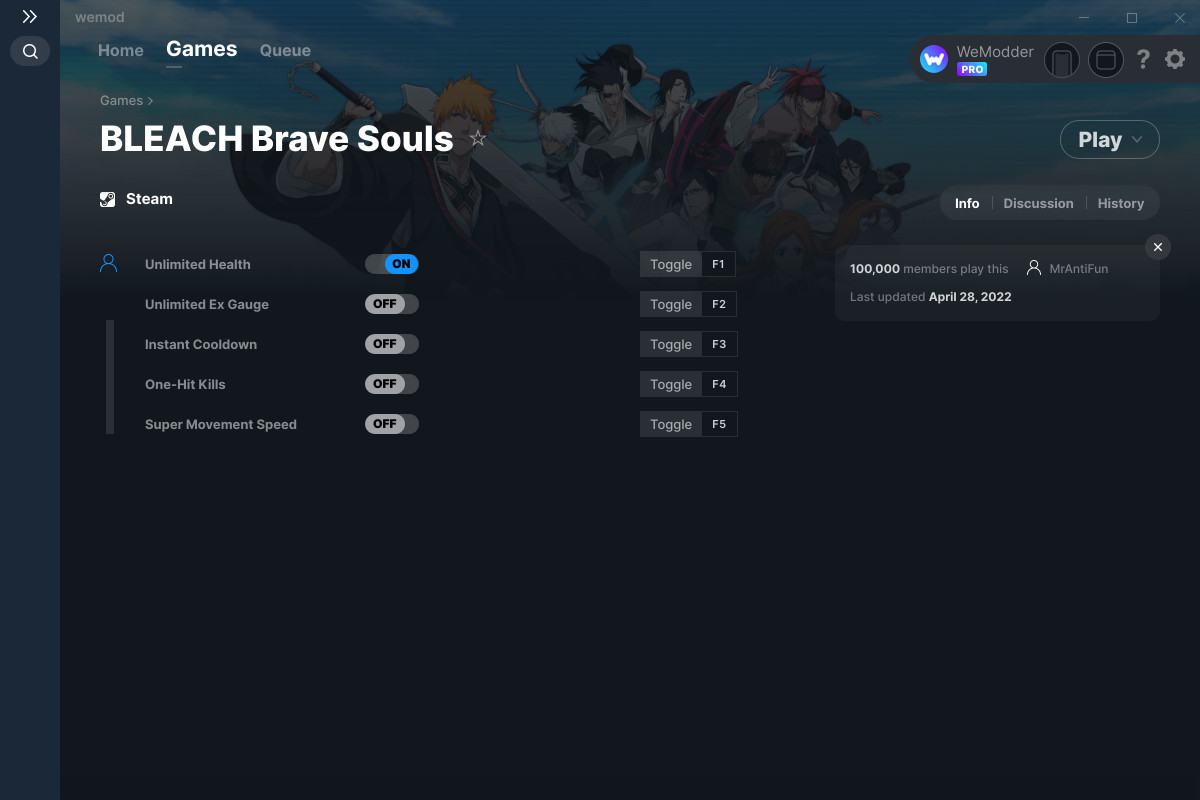 9 Likes
One of the 5 function not working-> Bleach Brave Souls Mod
Free To Play Games That Have WeMod Trainers
MrAntiFun October 13, 2020, 1:53pm #2

The BLEACH Brave Souls cheats have been updated!

I know people are gonna be ungrateful and complain about not having an ticket cheats or orb hacks, but I’m quite pleased with the fact that I can just AFK farm the missions now.

Excuse me but how’d you AFK farm the game? the only thing you can do is use 5 tickets at a time from what I know.

edit
That’s the closest to what you wrote that you can get.

what about an unlimited resources cheat?

I think it’s all server sided, except the things from within the map/episodes I think.

oh i didn’t think of that, i figured since it’s part of the player inventory it’d be mod able.

But the suggestion would be nice if possible… Played a lot of it on phone 3 years ago and got my save onto my pc a month ago so I’m trying to get back into it.

as far as i can tell the “super movement speed” cheat doesn’t do anything.

i dont want to sound greedy but o you think you can add a unlimated resources or add resource to your account? if you could that would be great

I think the best would be a modifier to the amount you get (1x, 2x, 3x and so on), since if you modify the files with cheat engine (resources in inventory) you’d have a high chance of being banned from what I’ve seen.

any guesses as to the chances of getting banned from using what we do have?

I’ve only read about changing items directly and not the other stuff, it should be safe as long as you don’t use it in public matches and stuff like that.

Ya just use it for singleplayer. Nothing online.

yeah i make a point to not use any cheats for epic raids, brave battles, co-op, or guild quests(if i was in a guild) so as to hopefully not get banned.

Mods work perfectly in solo except “super movement speed”
But in multiplayer whether in raid or in coop, nothing works except the “one hit kill” mod.
PLEASE REVIEW AN UPDATE !!!

Its not made for multiplayer or co-op. And we wont fix to work online.
Only singleplayer use