This is the official discussion topic of the FINAL FANTASY X/X-2 HD Remaster Trainer and Cheats in the WeMod app. Please post any suggestions, bug reports, or praise that you may have for the cheats in here! 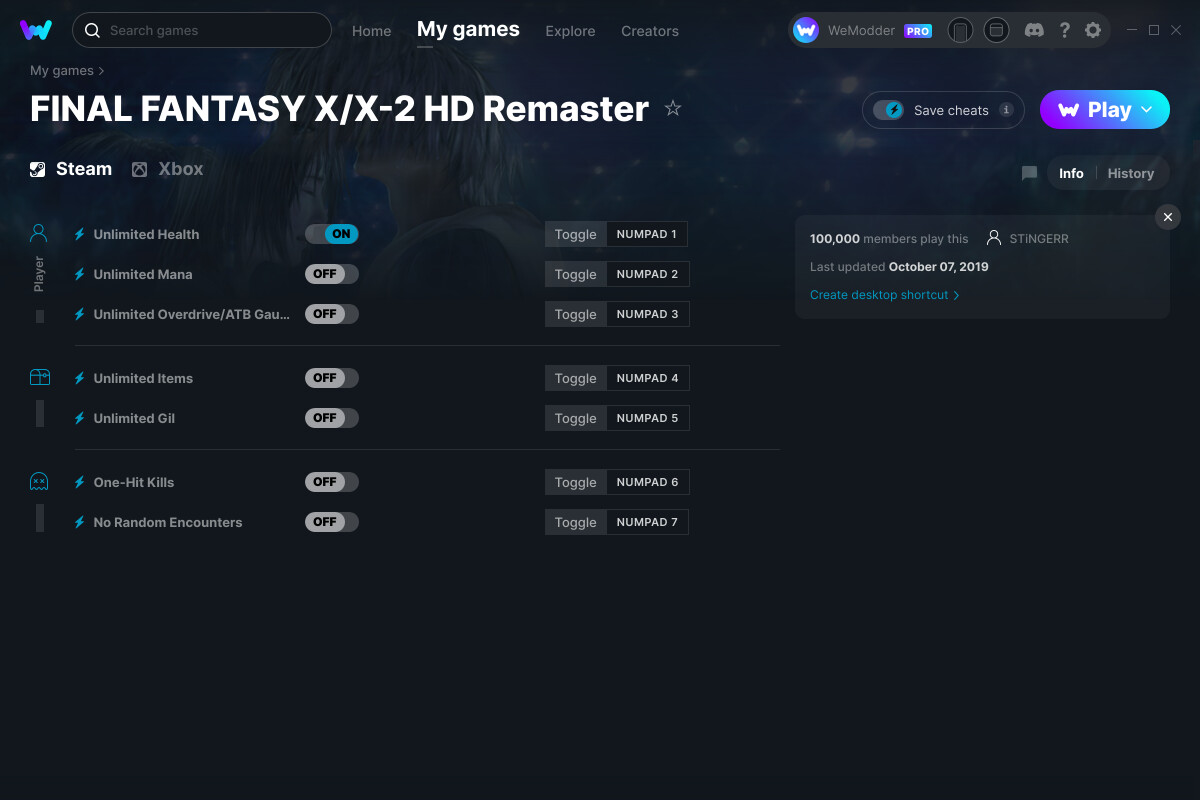 The FINAL FANTASY X/X-2 HD Remaster cheats have been updated!

so uh embarrassing problem not at all related to this trainor, but uh…anyone know how to get the game to start? i get stuck at a white loading screen and then it crashes. i already verified the files and im not using any anti malware.

I’m having issues with the unlimited health and the one-hit kill cheat. They both turn on, but the enemies are being affected too. I.E 1 hit killing me as well. If I just run unlimited HP the enemies have unlimited HP too.
Edited to add that I am only experiencing this issue when my party is made up of creatures. It works fine with just YRP

Hi when I run game on we mods it crashes alot

update pls some cheats are not working pls thank you

It says to start the game manually, then run cheats. I try this, and another version of the game tries to run at the same time. So no matter which one I close after that, the cheats wont work. As soon as I close one or the other, the cheats aren’t selectable

SLvl+ doesn’t seem to be working is that why it was removed from the current list?

Would be awesome to have an always break limits mod! (HP, MP, DMG, without the need for equipment) all key items would be great as well!!

What cheats are available? I see people talking about AP and S lvls? also, with unlimited items, does this work for spheres aswel so you can max out the grid? thanks!

What cheats are available?

They’re listed in the first post in this thread. And are also shown in the trainer itself in the WeMod desktop app.

Your second question I’m unable to answer myself as I do not play this game franchise.

Has there been any solutions to the fact the trainer crashes the game 100% of the time?

It’ll crash if you are not following the launch instructions in t trainer correctly.
Or if your game is not legitimately purchased from the store it was specifically designed for.

Click the info button in the trainer or read the important notes in the first post of this thread.

Otherwise it does not crash “100%” of the time. None of the recent posts report this, just yours.

Not sure what your version of “legit” is but I purchased from steam.
And yep, I read the notes and info on the trainer.

And it’s possible no one else is reporting this because they were having the same issue as I am but found a fix. Hence why I made the post in hopes someone might help out. But instead I got a useless reply from a mod that doesn’t even play the game.

You don’t need to play a game to know how games and trainers work. Especially if 90% of your career so far has been spent in the game development industry. I strongly suggest you make a slight tweak to your attitude there after reading the community etiquette guidelines.

And the reply wasn’t useless. It saves a lot of our time that can be spent helping others instead of going through troubleshooting steps with you if your game wasn’t legitimately purchased, because that right away would be the cause of your issue in such a case.

Anyway, after you had confirmed that the game is legitimately purchased, the next step would have been to make sure that both WeMod and the game’s .exe is added as an exception in your antivirus program, which could be interfering with its stability.

And if you have two .exes in the game directory, one for a DX11 version of the game and one for a Dx12 version, try both separately and see if one works better than the other.

Make sure your reply is in a more adult and mature manner.

To get infinite spheres for the grid you need to enable infinite items and then have Rikku on your team and enter a battle, also have the unlimited Overdrive ATB gauage cheat on as well. Then go to her MIX Overdrive and scroll down the list any item that had a total of 1 or more will be 99, you will then have unlimited spheres for the grid but if you use POWER SPHERES, SPEED etc on your Aeons to power up there Attack, evade etc you will lose those.

And will have to get them back from battles and rinse and repeat with Rikku’s OD to get 99 to use again, but you only have so much until you cant power them up anymore.