This is the official discussion topic of the Killing Floor 2 Trainer and Cheats in the WeMod app. Please post any suggestions, bug reports, or praise that you may have for the cheats in here! 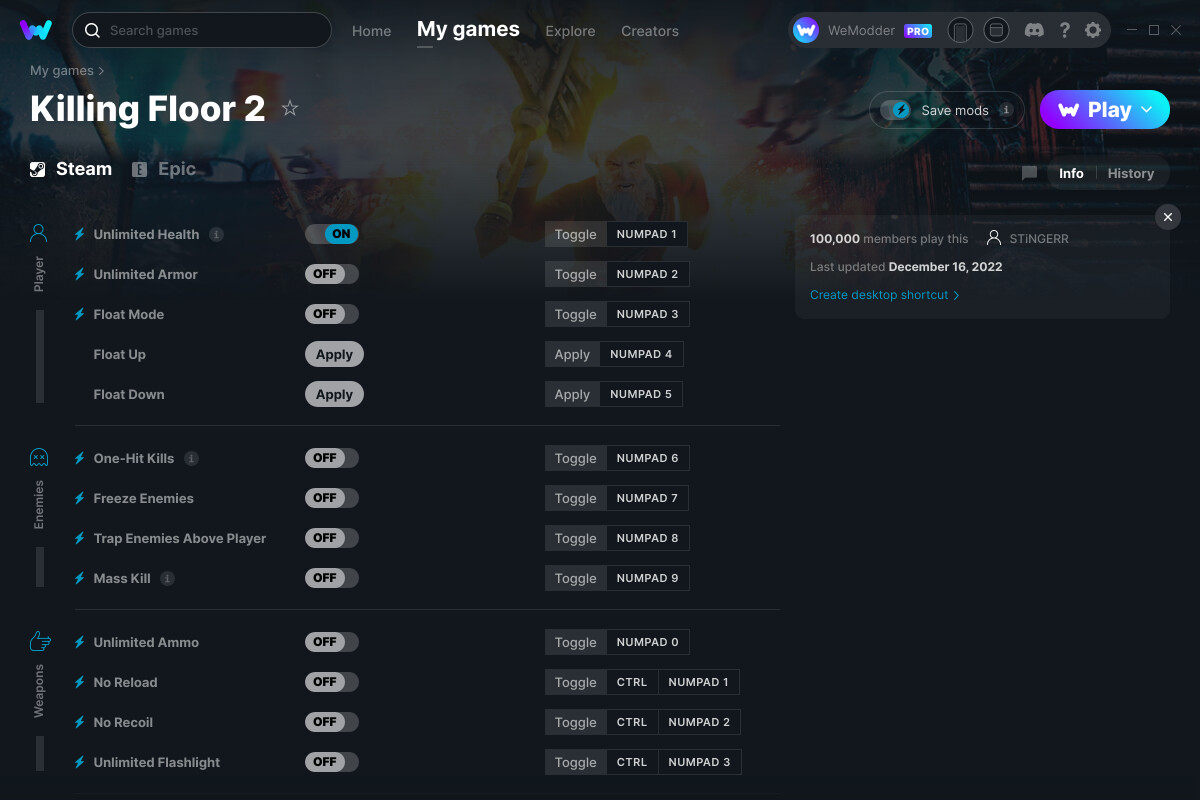 @STiNGERR nice I’ll try this one in a bit,

EDIT: Works great, though my game crashed for some reason but it was working fine, was making the game more enjoyable to me

it says it was not tested with current version, (Steam most recent update)
and it works but after about 1 minute or so in game killing stuff (About 10 zombies) it crashes

I just checked the game updated before i released the trainer, will update the trainer ASAP.

I wonder why they havent made this game VAC Secure yet. KF1 was full of online cheaters.
@Hawk, have you used this online? Does it work there?

no I have only tried in solo and if i use ones that work online it would only be in a private game with friends that are ok with it.

Also @STiNGERR Thanks, I figured it was something like that

The Killing Floor 2 trainer has been updated!

The Killing Floor 2 trainer has been updated!

Game seems to crash when infini ammo is enabled online. health seems to work but not ammo sadly

What about single player and offline? By the way, the trainer is not meant to be utilized online so that could be part of the reason.

I wasnt sure if using it online would cause issues, sorry about that. offline it works like a charm so thats probably why.

It doesn’t really cause issues, but some functions are different online so they wouldn’t work.
And only reason for this is because WeMod doesn’t support online modding because it ruins the economy for games where there is an economy present, ruins the game for others if its competitive has a leaderboard, and is bad for game developers.
You’re always free to try and use them online if you would like to, but just do know you risk the ban on something like your steam account (VAC ban) and WeMod would not be responsible for it, and it isn’t officially supported.

I think that the latest update for the game might have broken the mods. When I activate Infinite Health and Infinite Ammo the game crashes. It might just be infinite ammo that crashes it, the game crashes the second I try to shoot a weapon.

Are you using online?

Okay was just making sure.

@STiNGERR updated this trainer on Jun 10. if the game had updates after that then that explains the problem

needs to be updated

Tried it last night, here’s an update on what mods work and don’t work.

Working
Unlimited Health
One-Hit Kills
Give 9 Grenades
Add 5k Money
Freeze Enemies
Mass Kill
Trap Enemies Over Player (based on qu3L’s thread I did not test it)
Unlimited Flashlight (not 100% percent on this, tried it but didn’t notice any change.)

It’s a shame that it doesn’t work for online.