This is the official discussion topic of the Sid Meier's Civilization VI Trainer and Cheats in the WeMod app. Please post any suggestions, bug reports, or praise that you may have for the cheats in here! 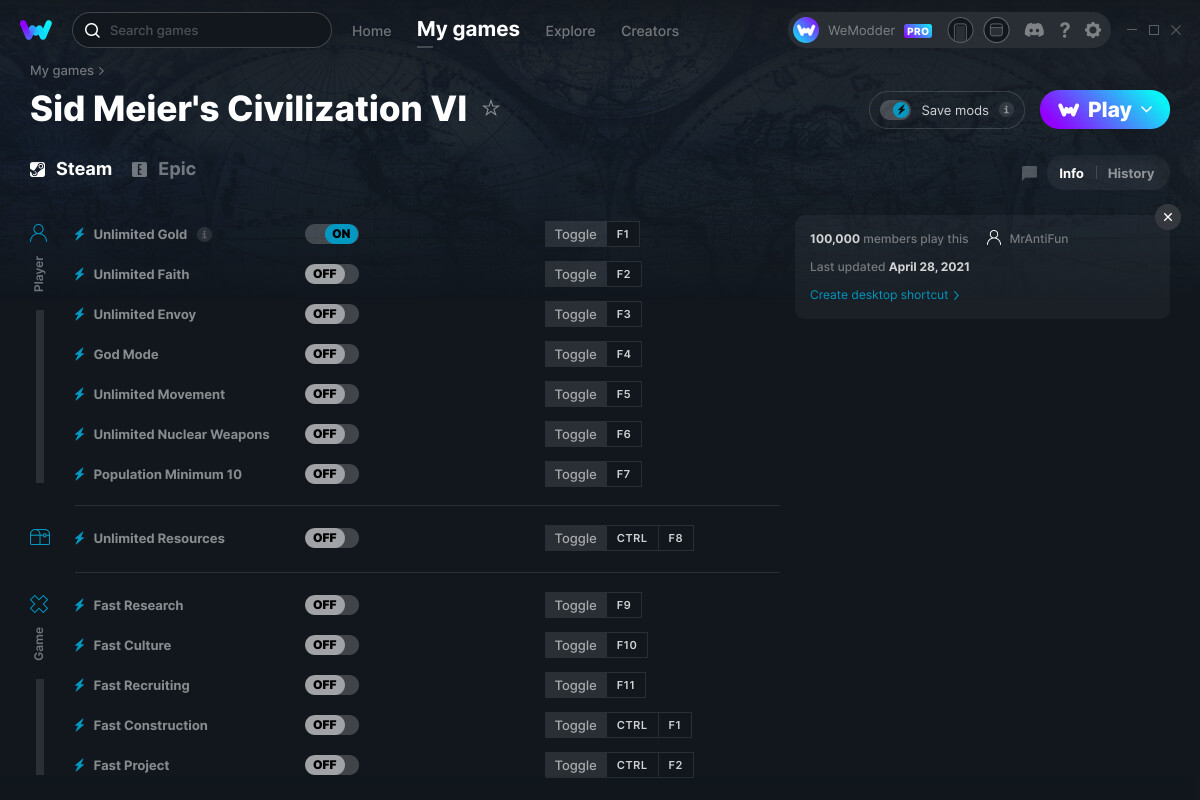 This trainer supports base game, Rise and Fall and Gathering storm , Took a lot of work to put it together , Any issues let me know.

Thank you sir. So far, inf. gold, faith, envoy, movement, and god mode aren’t working.
I run on DX11, tried to reactivate and reload the game but still not working. Thanks

Thanks for the trainer! It is working well for me with none of the DLC (don’t own it yet). I would definitely be interested in a DX12 version if you ever get the time, I know you are busy creating trainers for basically every game!

Unlimited movement does not work, when active a series of movements is maintained and suddenly stops working and units bought in cities while activated do not have this effect

Newest version of Gathering Storm: Seems like everything works occasionally, and then it’ll crash at random. Usable though, doesn’t crash too often. As long as I don’t do too many actions too quickly. Truly appreciate the hard work you put into your trainers Mr.Antifun, been a paying member for a few months and definitely won’t stop now.

Using Production cheat with a captured city causes a CTD

Doesn’t the current trainer work for DX12 if you launch the game first then press play on trainer?.

I can’t enable any item.

I am having issues with unlimited gold. when i try to do it, the game crashes. thanks
maybe i am doing something wrong.
i do it in the following order.
open steam.
open wemod.
start civ vi (use direct x 11)
start/load a game and wait until it is finished
switch apps to wemod, select civ vi and click play
return to game
click F1 ( i have tried waiting several turns before this with the same result.
game crashes.

I have the same problem activating unlimited gold.

Same for me, this doesn’t seem to work at all actually on Gathering Storm…

The Sid Meier’s Civilization VI cheats have been updated!

Launches the German version of the game for me. Weird.

But now it launches in English…double weird.
don’t know how I fixed it…