Do you plan to add a way to use WeMod on the Valve Steam Deck?

i dont think so man. it will be hella busy with a lot of new trainers to make and a lot time too to update outdated trainers.

We don’t exactly know how the Steam Deck works yet. All we know about it is that it runs on its own OS. This could possibly mean that WeMod could be made for it, but I wouldn’t get your hopes up.

Even if it is possible, writing code for the SteamOS would take a lot of time, and I’m sure the WeMod developers are busy enough as is with other work. This would likely be on the low priority list, again, if it’s even possible.

We will be looking into it once the device launches but there are no guarantees that it will be possible.

I am very happy if wedMod is released for Steam Deck

But I can use it on one xplayer, has anyone already tested it to see if it works?

For what i have tested, wemod runs in wine, and in proton too, but is more difficult because of dotnet 4.8 requiriment for wemod to even install/run, because the new wine versions (wine 5.0 and above) is not handling too well dotnet 4.8(the same actual problem for running space engineers in proton for example), but it can be done(doing downgrade in proton, installing dotnet 4.8, and upgrading proton after that) and the cheats is working, i have tested using cuphead and have worked just fine.

If the dotnet requiriment was below 4.7, wemod would working in proton without need any change in the wemod code.

Thanks for testing this out. What’s the maximum stable version that’s supported? I don’t think we can go lower than 4.7.1.

well, we can install wemod without problem changing nothing in wine 6.22 but couldn’t run after the program after that because the wine-mono(replacement for .net) was using 2.2.50727.5420 Service Pack 2
3.0.30729.5420 Service Pack 2, 3.5.30729.4926 Service Pack 1, and 4.7.03190, and that of course not always works fine for dotnet applications and that was the cause for wemod(application, not the installation process), but using winetricks(or protontricks for proton in steam) i could install dotnet 4.7.2(i have tried 4.7.2 instead of 4.7.1 because to try to see the maximum version suported without doing nothing more than install), and i was successful, but wemod was not starting, so i installed the dependency hell for wine, and in winetricks installed dotnet runtime 3, and wemod worked just fine, strange that i didn’t need to install .net 4.8 for some reason but it has started and worked fine, and i have tried without .net and with only dotnet runtime 3 together with wine-mono only, i just get the error mensage asking to install dotnet!

This is the image i have taked from it working it didn’t show the game installed because i didn’t install it this time, was only to make sure is still working, and to work with steam have a little more tricks, but to anyone installing a game without steam will work out of the box 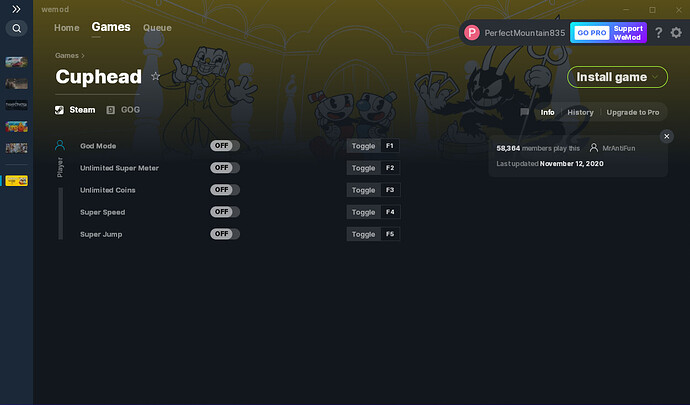 with_dotnet1250×734 102 KB
I hope it get more people to try in linux to make sure is working in other distributions, i have tested only in arch, using wine, wine-staging and wine-tkg-staging

and for anyone trying to test in steam with proton, start the game once to make steam create the pfx for the game, after that using protontricks choose the game you want to use wemod, install wemod using it(yes, you will install wemod for every game, because proton is not expecting you trying to start a windows application out of it pfx), after installed and wemod open, you can run your game and wait to wemod understand thar the game was launched, at least that was what worked for me, and if you want to open wemod in its pfx, use protontricks again, and open wemod in AppData/Local/Wemod/Wemod.exe inside the pfx, i hope i have helped those who want to try and thought was impossible

Heya. How is this still going? Are you still using Linux with wemod?
I’ll really like to implement this on the steam deck. If you’re in the wemod discord I’ll like to chat with you.
Thanks.

+1 - would love it if wemod worked on Steam Deck. I have one, and currently there is no easy one-stop solution for getting cheats and trainers set up, as far as I know.

Sorry, this couple of mouths I was in windows. I have put Linux again(popOS 22.04), and I will try again wemod with Proton this time

maybe will get out of linux for job reasons, but, this error is new, i dont know why it has happened

update: for what i can see it would be need to compile a proton version based on wine-staging, because he can open a file without the need to be a admin user.

@frank I will try again in popOS 22.04lts other ways to make wemod work in deck and linux as a whole, but is there a reason for this part not be able to run with admin rights?