Borderlands 3 Cheats and Trainer for Steam

This is the official discussion topic of the Borderlands 3 Trainer and Cheats in the WeMod app. Please post any suggestions, bug reports, or praise that you may have for the cheats in here! 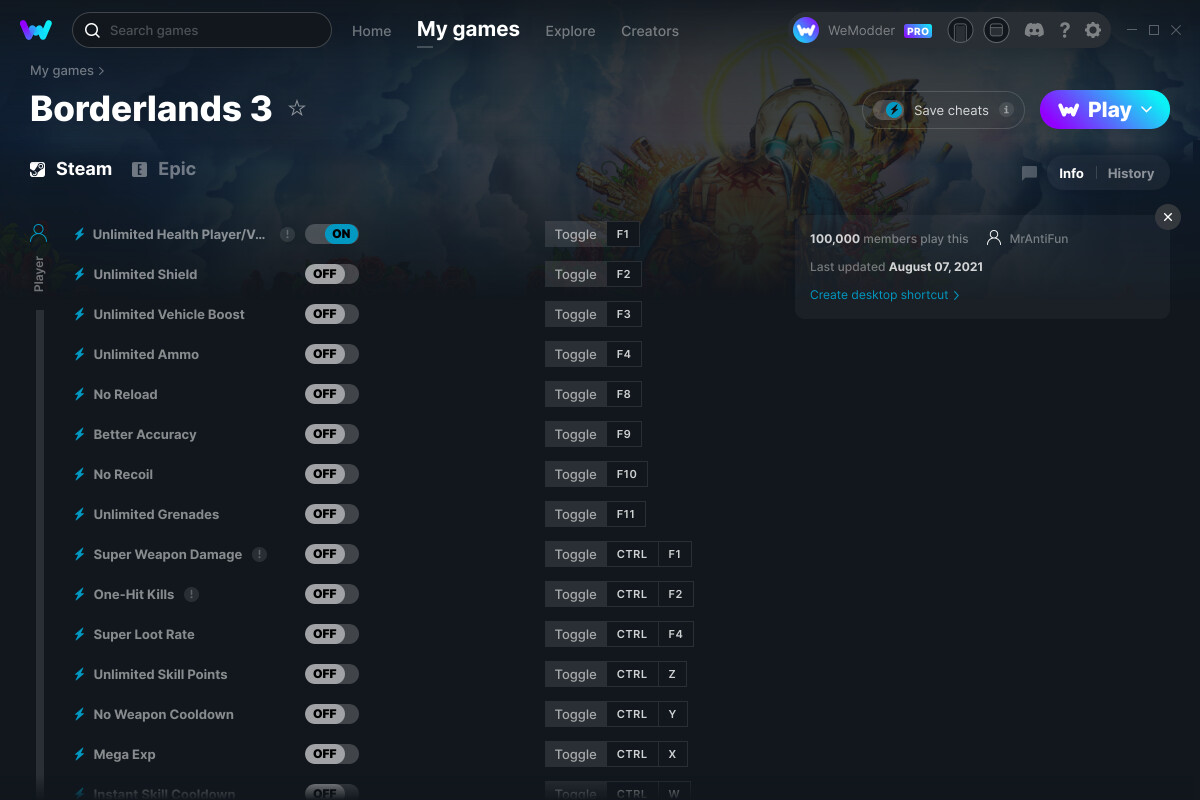 The Borderlands 3 cheats have been updated!

WELL THERE YA GO FOLKS! MAF you are da best!

A HUGE THANKS SHOULD TODAY GO TO OUT MAF for creating now an official STEAM version of the WeMod trainer!

(cmon folks, a big round of applause for MAF!)

Thank you so much!!! Been waiting for this trainer!!!

YES! Thanks MAF, I mean, the other one worked, but now I can launch with wemod!
WOOT!!

I am happy, but the game crashes on usage…no error messages it just closes the game.

Make sure you are using DX11 as DX12 will not work with this trainer.

Same here man, it worked for a hot second but I’m gonna try a few things.

How do you determine that which version is used?

I figured it out. You go into the options and enable DX11. The trainer works afterwards. Cheers!

god mode does not work at all.

if you use a grande on yourself or if a blast hits you than you die.Needs update!

Works well on my Steam copy.

strange I am using the steam digital.I will try it out tomorrow.

my buddy and I are huge fans of WeMod. I am playing on Steam and he is playing on Epic. We are both having similar issues. We have used the inventory slot and the golden key mods and now every time we try to play with WeMod it crashes. No matter what way we try it, or what DirectX we are using. Doesnt matter. We can start the game normally, pause, alt+tab and click play on WeMod, but as soon as we unpause the game crashes. We believe there is something with WeMod and the game that crashes due to certain mods being activated and then starting the game up again and it crashes before we can set the same mods up again…

Something screwy is going on…

might be because you are using it in an online match.

Any chance to have trainer update for DX12?

This ‘old coder’ wants to throw another post out there…with maybe some help for those reporting crashes using the trainer.

A suggestion to move you forward and try again to see if this helps:

Two things, Ensure you are fully updated by:

-Updating to your LATEST gfx drivers…ie: 445.75 for nvidia GeForce users
And
-Ensure your Win10 is fully updated to the most current release

Anyone crashing still, can they try this and report back if any success?

Hi sadly this needs updating super loot no longer works and other cheats as well.

Hopefully we won’t have to vote for this update, the game just got released on steam not too long ago.