My antivirus marked WeMod as a Trojan

Hello!
I was about to use a Trainer for Borderlands 2 when this popped up! Is this a false positive or is it something else?

I was using the trainer with no problems yesterday. I will stop using WeMod until I know that it is safe to do so. 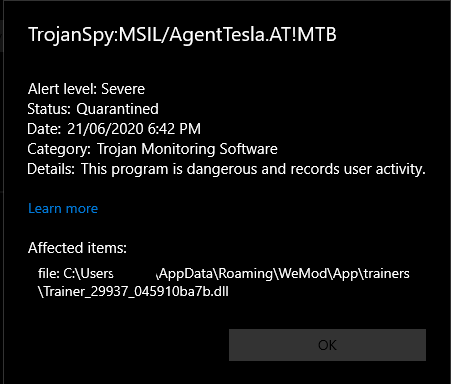 Welcome to the WeMod community.

You have nothing to worry about.

What is happening?
This is what is known as a false positive.

Every now and again, antivirus programs will have an issue with a trainer. This will happen no matter where on the internet you get your trainers from.

Sometimes an antivirus might be fine with a particular trainer and then, one day for no apparent reason, suddenly decide that it doesn’t like it anymore, even if nothing has changed (ie, a trainer update).

Why does this happen?
There are a number of factors why this could be happening:

The conclusion
The trainer is completely harmless. Your antivirus is just being over-cautious.
WeMod is the largest provider of trainers on the internet. It doesn’t make any sense from a business perspective to infect potential paying customers with a virus, does it?

WeMod is also the safest provider of trainers on the internet. Our advanced and secret security encryption and the bundling of trainers in a piece of software rather than having them standalone means our trainers cannot be ripped and re-uploaded anywhere with shady things in them. Which is a problem that all standalone trainer providers face.

How do you resolve the issue?
Add the following files as an exception in your antivirus program:

(The above image is accurate at the time of this post).

Thanks for replying! I also thought it was a false positive since I was using the trainer for quite some time now and it only flagged it as harmful today. I just made this post just to make sure that I wasn’t harming my computer and your reply has proved quite helpful.

Thanks for clearing things up and thank for you for the additional explanation!

You are most welcome indeed.

Enjoy the game with WeMod and always feel free to visit the forum if you need support, have questions, to hang out or just to grab a freebie that occasionally gets posted in the Deals & Giveaways section of the forum.